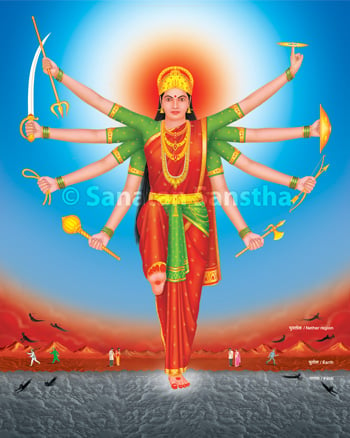 1. Worshipping the Goddess on the
occasion of Gouri Trutiya (Third day of month of Chaitra)

1 A. Reign of the Chaitra Gouri and its significance

1. Chaitra Gouri celebrations commence from the day of Guḍhipadva (First day of the Hindu lunar month of Chaitra). On this day, Shaktitattva-predominant oriented Chaitanya in the form of the Vayutattva (Absolute Air Principle) flows from the atmosphere of the universe towards the earth. During the period from Guḍhipadva to Gouri Trutiya, there is creation of the nirguṇ form of the flow of Adishakti that is functional in the respective time cycle of Brahma, that is, a Shakti flow of Chaitanya in its primordial state. This period is charged with Anand (Bliss), because the Shaktitattva that rides the Vayutattva being active in the universe, is extremely Bliss-bestowing to the mind. The invocation of Gouridevi done on the day of Guḍhipadva enables purification of the subconscious mind. As a result, all tasks performed by the worshipper during the subsequent year are performed without dehabuddhi (Body-awareness) because of which these turn out to be more effective and fruitful. Performing tasks without dehabuddhi sanskar (Subconscious impressions) means, the sanskar that ‘The one performing the task is not a physical body made of flesh and bones, but the Chaitanya within the chitta (Subconcious mind)’ getting impressed upon the chitta and the task being performed under its influence.

2. The Shaktitattva generated from the flow of the Vayutattva after invoking Gouridevi on Guḍhipadva commences to become radiant on the day of Gouri Trutiya. This aura of its radiance spreads all over the universe and is described as the ‘Brilliance of the Shaktitattva’. This is the phase in which the Shaktitattva enters the stage of youth. This also means that in the month of Chaitra, meaning, since commencement of the New Year the process of creation of the nirguṇ form of the Adishakti gradually begins to assume a saguṇ form with the help of radiance from the day of Gouri Trutiya.

1 B. Benefits obtained by worshipping the Goddess on Gouri Trutiya

Due to worship of the Goddess on Gouri Trutiya, radiant particles accumulate in the body of the individual and help in awakening the imaginative power of the individual. Hence, during this period new poems get written through several capable individuals.

2. Worshipping the Goddess on
the day of Haritalika (Bhadrapad Shukla Trutiya)

‘On Haritalika (Third day of the Hindu lunar month of Bhadrapad), the Shaktitattva manifests in the universe in the form of flow of Tej (Absolute Fire Principle) particles, and under the influence of Shiva, assumes a form in the universe. Hence, in the body of the woman performing the puja, with the strength of the combined energies of Shiva and Shakti, there is accumulation of kriya-shakti (Energy of action) at the  respective levels.

3. Worshipping the Goddess during Navratri

3 A. Performing the Lalita Pujan on the fifth day of Navratri

‘The fragrance of the Shaktitattva form is called ‘Lalita’. The Shakti form enticing everyone by its fragrance is termed as ‘Lalita’. On Panchami during Navratri, due to the action of these fragrant waves existing in the universe, purification of the manomay-kosha of the worshipper takes place.’ – Pujya (Mrs.) Anjali Gadgil

3 B. Worshipping an idol of Goddess in standing posture on the eighth day of Navratri

‘Celebrating Navratri is the worship of the marak form of Adishakti. During Navratri, the maraktattva of Shri Durgadevi grows in phases everyday. On Ashtami, the proportion of red Tej waves from the marak waves Shri Durgadevi is higher. Since these Tej waves are associated with the Vayutattva and Akashtattva (Absolute Ether Principle), on Ashṭami along with a mask made from rice flour, the Idol is draped in a red sari. Rice has the quality of being all-encompassing and responds with equal intensity to the sagun and nirgun waves. On Ashṭami, this attracts waves of the Devitattva that are dominant in the Tejtattva.’ – Pujya (Mrs.) Anjali Gadgil

3 C. Worshipping the Goddess Saraswati on the eighth and ninth day of Navratri

The actual invocation period of Saraswatidevi, however, should be celebrated on Ashwin Shukla Ashtami, because it is from this day that the Saraswatitattva waves begin to take a seed form. On Navami this form gets stabilised on the earth and performs its mission. That is why, it is meant for worship of the complete saguṇ, creative form of Saraswatidevi. Hence, on this day the attraction of the devotees for this manifest form of the Goddess grows. On Vijayadashami, Saraswatidevi once again assumes a saguṇ form, which becomes dormant, finally attaining a state of dissolution. Hence, on this day after puja, Her idol is immersed in flowing water.

‘From Ashtami to Vijayadashami, the Shakti form is adorned with creative intelligence. The touch of the tarak waves of Saraswatidevi activates the energy of the soul of the worshipper and transforms it into creative  intelligence. This knowledge bestows the devotee with the spiritual experience of Ānand.’ – Pujya (Mrs.) Anjali Gadgil

4. Worshipping the Goddess on Vijayadashami (Dushehra)

‘On Dushehra, with worship of the active part of the Saraswatitattva, the manifest bhav of a jīva gets transformed into unmanifest bhav and this helps in making it stable.

4 B. Worshipping the Goddess Aparajitadevi

4 B 1. Placing an idol of Aparajitadevi on a rangoli (Auspicious designs drawn on the ground from white crushed stone) of an octa-petalled figure signifies Her ability to control the eight directions

Aparajita is a mārak form of Durgadevi which with the help of the Pruthvitattva manifests from the womb of the earth and functions for the sake of individuals on the earth. This form of the Goddess holding a trishuỊ (Trident), which is mounted on the throne of eight petals, destroys demoniacal energies along with Deity Shiva and the support of the Dikpal (Deities of directions) and Gruhadevata (Deities of the house).

When the Shaktitattva, Aparajita seated on the throne of eight petals emerges from the womb of the earth in response to prayers of devotees, the Ashtapal (Deities of the eight directions) also manifest to welcome Her. The tips of the eight petals represent these eight Deities. The marak waves generated from the creation of Aparajitadevi through the medium of the Ashtapal get emitted as waves of red light and destroy the Raja-Tama (One of the three components in the universe, signified by inertia and ignorance) energy accumulated in the respective corners and to help individuals on the earth to lead an obstacle-free life and purify the atmosphere.

4 B 2. Since the leaves of shami (Indian mesquite tree) are good conductors of energy, worship of Aparajitadevi (A form of Shri Durgadevi) is performed near a shami tree

Aparajita, a form of Shri Durgadevi is worshipped near the shami tree because shami leaves being good conductors of energy conserve the energy of Aparajita manifesting in the form of fountains for long periods. Jivas can benefit from this energy for a year by preserving these leaves in their homes.’

5 A. Why perform the act of sweeping out alakshmi before performing Lakshmipujan ?

Sweeping out alakshmi means collecting the dust in the house with a new broom in a pan and throwing it out of the house. Dirt in the house represents Raja-Tama components. That in which the Sattva component is low and that from which the chances of deriving Chaitanya is 0% is said to be devoid of Lakshmi and is called alakshmi. Since midnight is the period when maximum Raja-Tama waves are generated, this act is performed to purify the premises and to facilitate the entry of Sattva component waves into it so that after Lakshmipujan maximum benefit of Chaitanya is obtained.

5 B. Which food items should be included when offering Naivedya to Lakshmidevi?

‘The Naivedya should include cloves, cardamom, milk and sugar. These items are termed trigun avatar (literally meaning Incarnation of the three components) and perform the task of decreasing or increasing the triguṇas in the individuals.

1. On this day, 30% of the Principle of Deities Shri Lakshmidevi and Kuber is emitted. Hence, by worshipping them, devotion and bhav of the individual is enhanced and the state of bhav is sustained for three hours.’

2. ‘The touch of the tarak waves of Lakshmidevi causes destruction of Raja-Tama particles, both within the body of the individual and outside it and help in creating a protective sheath around it.’