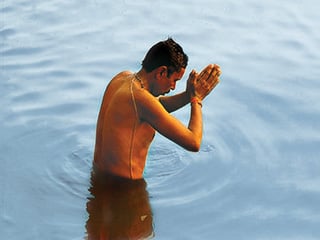 The river Ganga originates in the Himalayas at Gangotri and culminates in Bay of Bengal through its tributaries. It stretches along 2,510 kilometres. It is the holiest among all the seven Holy rivers in Bharat. One who elevates (the bathing embodied soul) to the state of the Deity is the Ganga. One to whom those desirous of Liberation turn to is the Ganga (says the Shabdakalpadrum).

1. Some names of Ganga

Deity Brahma washed the feet of Shrivishnuwith the water from His Kamandalu (Water pot). It was from thiswater that the Ganga originated and thus came to be known asVishnupadi (Pad means feet).

She is called so because She flows through allthe three regions – heaven, earth and hell (Tri means three andpatha means path).

It was because of austerities undertaken byBhagirath that this river descended onto earth. Hence, the river isnamed after him. According to theShaiva sect, Bhagirath pleased Deity Shiva with his austerities. Toprevent the earth from breaking into two due to the force of thecurrent of the Ganga flowing from heaven, Deity Shiva took Gangaupon His head. From there, She made a gradual descent onto theearth, at Gangotri in Bharat.

While flowing down the Himalayas, the Gangaswept away Sage Janhu’s site for performing sacrificial fires. Thisenraged the Sage who swallowed Her stream in its entirety. ThenBhagirath prayed to Sage Janhu. Consequently, He released thewaters of the Ganga through His ear. That is how Ganga came tobe known as Janhavi.

It is the holiest among all the seven Holy rivers inBharat. Should any water in the world be compared to the water ofthe Ganga, those who can perceive the subtle dimensionwillrealise that the latter is holier.

B. The one bringing about spiritual evolution

Dr E Hanbury Hankin’s research of the 19th century is associated with the disinfecting / antiviral power of Ganga’s water. Hankin (1896) reported that cholera microbes did not survive for long in the Ganga waters. He conducted his studies on the Ganga at Varanasi, where he collected samples below the cholera-infected dead bodies that had been thrown into the Ganga, and found that the cholera microbes died within a few hours of their contact with the Ganga water.

It has been proved scientifically that like cholera, the germs of plague, malaria etc. also cannot survive in the water of Ganga. It has also been proved that by drinking Ganga water everyday,resistance against diseases increases and illnesses such a sin digestion, long-standing fever, diarrhoea, dysentery, asthma etc. are gradually cured. Ganga water has the potential to heal a wound. Even as per Ayurveda, the Ganga water has many outstanding medicinal values.

River Ganga is associated with knowledge, while river Yamuna with devotion.