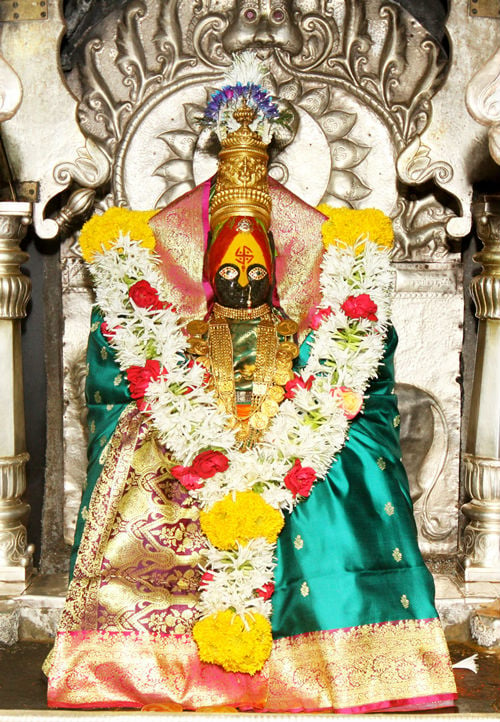 A. Kumari (Virgin girl) : Substances such as flowers, floral garlands, grass, leaves, bark of trees, cotton thread, turmeric, shendur (An orange powder), kumkum (Saffron) etc. play an important role in the ritualistic worship of this Devi. Objects which are dear to young girls are offered unto Her.

B. Renuka, Ambabai and Tuljabhavani : If any one of these Deities is the Kuladevi, then after marriage, rituals such as the ‘Gondhal’ (A celebration specific to Maharashtra, Bharat) is performed in the house to appease Her. This is akin to performing the ritualistic worship of Satyanarayan after successful completion of rituals such as marriage or the custom of offering ‘bodan (A mixture of curd, milk, rice, pancakes, honey and Bharatiya bread)’ by a group of at least five married women and a virgin girl to the female Deity.

C. Ambaji : In the temple of Ambaji (Ambamata) in Gujarat in Bharat, instead of oil, ghee (Clarified butter) is used to continuously light the lamps in the temple.

D. Tripurasundari : She is one of the Deities of followers of the Tantras (known as tantriks). A sect that is quite popular is named after Her. Followers of this sect believe that She can be worshipped only after being initiated into their sect.

E. Tripurabhairavi : She is a Deity of followers of the Tantras. She is considered to be the Deity who bestows the three Purush-arthas of Dharma, Artha (Wealth) and Kama (Desire). She has emerged from the Shivalinga. The Kalika purana describes this form of Bhairavi as the most powerful form of Tripura. She is worshipped with the left hand. Red is Her favourite colour. She likes red wine, red flowers, red clothing and shendur.

E. Kali : Worship of Kali has been prevalent in West Bengal since ancient times. The two Holy texts – Purnanand’s ‘Shyamarahasya’ and Krushnanand’s ‘Tantrasar’ are especially renowned.Wine is the most essential substance in this ritualistic worship. It is purified with the help of a mantra and then partaken of. Worship of Kali should be performed on the Kali yantra. This yantra should bee ither triangular, pentagonal or non agonal in shape as advocated in the Kalikopanishad. Sometimes it is even fifteen-edged. Worship of Kali is fruitful specially if performed at night in the dark fortnight of the Hindu lunar month of Kartik. The worship includes recitation of the Kali stotra, kavach (Armour), Shatanam (Hundred Names)and the Sahasranam (Thousand Names).

F. Kamakhya : In Guwahati, Bharat, in the temple of the Devi Kamakhya instead of an Idol, vulva is engraved on a stone in a cave inside the temple. A spring flowing nearby keeps this stone always wet with its running water. The Deity is worshipped by offering flowers and leaves on this symbol of the vulva. Kamakhya in this vulva form represents Bhudevi (Deity of the earth). Annually, during the four days of annual menstruation of the Deity in the Hindu lunar month of Ashaḍha, the doors of the Deity’s temple are kept closed and She is worshipped continuously. This is called ekantpuja (Ritualistic worship in solitude). Thereafter, to symbolise the menstruation,devotees are given pieces of red cloth as the Holy sacrament.

G. Chamunda : Eight hidden yoginis function under controlof the main Deity and regulate the activities of the universe, creation of objects, their effects etc. in the cycle. A special type of ritualistic worship called ‘sandhipuja’ is performed in the transitional period between the eighth and ninth days of the Hindu almanac for this Chamuna form of Deity Durga. People keep awake the whole night singing, playing music and games.

H. Durga : Shri Durgamahayantra is the seat of the Deity, ShriBhagawati (Durga). During the festival of Navaratra, worshipof the Navadurga, the nine forms of Durga, is undertaken.

I. Uttanpada : This form is enriched with the three qualities of motherhood, reproduction and Creation of the universe. Idol of the Deities Chinnamasta or Lajjagouri is placed on the ground on its back, with folded knees facing the worshipper. Since ancient times, it is customary to worship this Idol in this way. It is usually worshipped in the same arrangement as the shalunka of a Shivapindi. A path is created for water to flow when Abhishek (Ritual of consecration by sprinkling water) is being performed. This path of the Shivapindi is called the mahamarg (Supreme path) of the mahabhaga (Supreme penis) of the Mahashiva.

1. Correct methods of performing rituals as per science of Spirituality

Every Deity has a specific scientific method of worship. It means that there is a definite science underlying every act performed during the ritualistic worship of a Deity. The table ahead gives information on the common rituals performed, that are associated with worship of Adishakti Shri Durgadevi and all Her forms. This information is from the Divine Knowledge received by the seekers of Sanatan Sanstha by God’s grace.

Yantra
Device/shape that represents a Deity. (However, a subtle Yantra is a distressing form created by negative energies in the subtle.)
Stotra
Holy hymn; These hymns praise aspects of the divine, such as Devi, Shiva, or Srivishnu
Dharma
Righteousness
Adnya-chakra
Sixth centre or the chakra in the spiritual energy system located in the mid-brow region in the subtle body
Abhishek
Consecration of Deities by ritualistic bathing with water, milk etc
mantra
A syllable or words representing spiritual reality or an aspect of God uttered to protect oneself or to achieve a specific goal