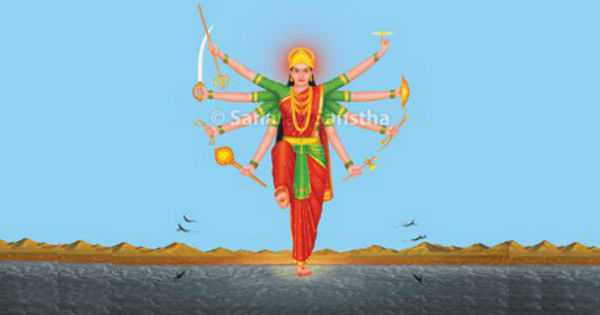 Innumerable Shaktis (Divine Energy) of God are in a state of oneness with Him. Amongst them, the following three are given predominance.

A. Antarang (Internal) : This is said to be the inherent Shakti of Shrinarayan.

B. Tatastha (Neutral) : That Shakti which is neither entirely one nor totally distinct from God is called Tatastha. The innumerable living beings in the universe constitute God’s Tatastha Shakti. Basic Maya can be grossly referred to as this Shakti.

C. Bahirang (External) : Prakruti (Great Illusion) in the form of the universe extending from the Mahatattva (The Great Principle)to the earth along with all worldly objects is called bahirang Shakti.’ (In other words, bahirang Shakti means everything associated with the Panchamahabhutas [Five Cosmic Elements]from the Saptalok [Seven higher cosmic regions]).

Meaning : The Paravidya takes the ever new form of Adishakti and becomes the cause for Mukti (Liberation). This Devi of the male Deities (In the Mohini form) becomes the reason for the jiva to getentangled in the web of the world.

Implied meaning : ‘This Maya (The Great Illusion) liberates one by becoming Vidya (Spiritual knowledge). This is a form of Maya that bestows knowledge. However, her other form entraps us in the worldly life. This second form is the Mohini (Enticing) form and it iscompletely manifested in a woman. You may consider yourself very determined, clever and wise, but this Mahamaya Mohini will not fail in dragging you along.’ – Gurudev Dr Kateswamiji, Shrirampur, District Nagar, Maharashtra.

2. Types according to mission

A. Shaktis associated with Creation

Science underlying the Idol :Devis such as Bhudevi are headless. They possess only the breasts and vulva. At times, a lotus or a chakra (Wheel) substitutes the head. For the vulva to appear prominent, the legs are bent and pressed against the abdomen. The breasts signify Sustenance and the vulva represents Creation. Sometimes, a lotus, which is a symbol of procreation, is drawn at the site of the vulva. (A bull is a symbol of masculinity or paternity.)

B. Shakti associated with Sustenance

2. Mission : Nurture and Sustenance of the universe as well as its manifestation, that is, bestowal of good fortune, prosperity,wealth, longevity and health, progeny, abundant food grain, servants etc.