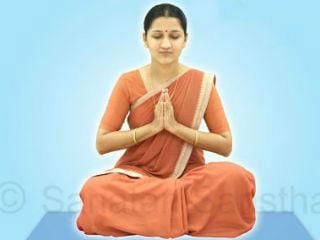 Among the various spiritual paths, the easy path to bring about faster spiritual progress is ‘Namasankirtanyoga’ (Chanting God’s Name). If one chants the Name given by the Guru (also known as the Gurumantra) with faith, one attains Moksha (Final Liberation); but if one does not get a proper Guru, how it is beneficial to chant the Name of the female or male family Deity can be understood from the following information.

‘Kula’ is a family, meaning a group of people who are related by blood or through marriage. An individual takes birth in the family, which has a Kuladevata (Family Deity) he is required to worship.

‘Kula’ means the Kundalini energy centre called the Muladhar-chakra, Shakti or Kundalini. Kula + Devata means that Deity whose worship leads towards the awakening of Kundalini-shakti in the Muladhar-chakra. In other words, one’s spiritual progress begins. Kuladevata can be either a Kuladev (Male Deity) or a Kuladevi (Female Deity).

A. When we are suffering from a major illness, we do not take medicines according to our likes. We consult an authority in that field, that is, a physician and take medicines according to his advice. Similarly, to recover from the great illness of being entangled in the vast ocean of worldly life, that is, to make spiritual progress, we need to practice Spirituality under the guidance of a spiritually evolved individual. However, there are very few such spiritually evolved people in society. Hence, the query remains aslo which Name we should chant for spiritual progress. God, however, has provided us with an excellent solution. He has given each one of us birth in a Kula appropriate for our spiritual progress.

B. Of the thirty-three crores of Deities, our Kuladevata is the closest to us, the one who will respond to our call and will make us progress spiritually.

C. When all the Principles in the universe are imbibed by the subtle-body, spiritual practice is said to be complete. Only chanting of the Kuladevata’s Name has the potential to attract all Principles in the universe and increase them all upto 30%. As against this, chanting of the Names of Deities such as Vishnu, Shankar, Ganapati, Lakshmi etc. increases only that particular Principle in which we are deficient.

D. The Kuladevata being Deity of the Pruthvitattva (Absolute Earth Principle), we do not experience any harmful effects if we begin its spiritual practice. However, we may suffer from harmful effects if we directly commence the spiritual practice of Tejtattva (Absolute Fire Principle); for instance, chanting the Gayatri-mantra without having the potential to do so. This does not happen with the worship of the Kuladevata.

B. If we have both, the Kuladev and Kuladevi, we should chant the Name of the Kuladevi for the following reasons.

1. Children are more demanding with the mother because the mother fulfils their demands faster. The Kuladevi, too, is appeased faster than the Kuladevata.

Once the chanting of the Name of the Kuladevata is completed, the Guru Himself comes into the seeker’s life and blesses him with a Gurumantra.

Kundalini
Dormant spiritual energy in the subtle-body. It is coiled like a serpent and consists of one central channel and two channels on its sides
mantra
A syllable or words representing spiritual reality or an aspect of God uttered to protect oneself or to achieve a specific goal