According to the Vedas, the alphabet ‘da’ in Durga suggests destruction of demons. The ‘u’ has been accepted tore present over coming of obstacles. The half ‘ra’ signifies elimination of disease, ‘ga’ nullification of sins and ‘a’ the overcoming of fear and destruction of enemies.‘Dur’ in Durga means evil and ‘ga’ means remover or destroyer. Hence, Durga means the one who destroys the evil. Slaying powerful demons such as Mahishasur, Chanda-Munda and Shumbh-Nishumbh, Durgadevi emerged as Mahashakti (Supreme Shakti) and assured protection to all Deities and man.

There is also a spiritual form of Durga beyond Her physical form. In that form, She liberates devotees from the web of Maya (The Great Illusion) and attachment and bestows them with self-realisation.

All the Deities appeared before Devi and asked Her,“O Mahadevi (Supreme one), who are you ?” She replied, “I am Brahmanswarupini, a form of Brahman. This universe composed of the Prakruti (Primeval Nature) and the Purush (Absolute Being)and the unmanifest and manifest universe has been created from me. I am both, Anand (Bliss) and Niranand (Lacking in Bliss),ignorance and knowledge and also non-Brahman and the Brahman worthy of realisation”.

The image of Durga represents the energy of the Nation.The physical and mental prowess, prosperity in all dimensions and spiritual strength of the Nation, all three are fused into this image. 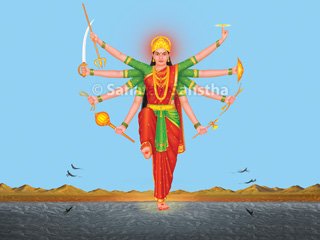 1. Science pertaining to the Idol of Durga devi

Shri Durgadevi is depicted in various forms having four, eight or ten hands etc.The matted hair of Shri Durgadevi is woven in such away that it appears as beautiful as a ray of moonlight. She is three-eyed,with a face as beautiful as a full moon, complexion like that of heated gold, with radiant and beautiful eyes, ever youthful, adorned with all ornaments. She has arms resembling the stems of a lotus and they reach Her knees. She has raised all of her ten arms. In the arms to Her right, She holds (from above) a trident, a sword, a Sudarshan-chakra, a sharp arrow and a weapon called Shakti, respectively. In the arms to Her left, She holds (from above)weapons like khadak (A weapon which is thorny and broad at oneend and narrow at the other), bow and arrows, noose, goad, bell or axe. Also, the body of demon Mahishasur is shown lying at Her feet. Therefore, one should contemplate deeply (Meditate) on mother ShriDurgadevi, who is full of radiance and energy,best ower of Dharma (Righteousness), Artha (Wealth), Kama (Desire) and Moksha (Final Liberation) and nourisher of the whole universe.

Implied meaning of various body parts depicted in the picture of Shri Durgadevi :

Shri Durgadevi holds various weapons such as goad, arrow, sword etc. in Her hands. The power of the weapons held by the Devi lies in Her who uses them. These weapons contain Devi’s energy. Shri Durgadevi holds a vessel of blazing fire in one of Her hands. Its temperature is up to 200 degrees centigrade. She continuously holds a vessel with such a high temperature. This gives an idea of Her power. In fact, She Herself is the origin and the Creator of the fire energy.

There are nine different dimensions in the nature and a separate form of Shri Durgadevi rules each dimension.There are nine such Durgas and hence they are called ‘Navadurga’.‘Mahakali, Mahalakshmi and Mahasaraswati are the three main forms of Shakti. Two other forms manifested in each of these, thus, giving rise to three forms of each type. These nine forms were then referred to as Navadurga.

A. Shailaputri : ‘Shailam’ refers to a mountain, which is at reassure trove of precious stones and other valuables. Shailaputriis one who is not attracted to worldly happiness even after seeing this store of precious items and who sacrifices worldly life in the pursuit of self-realisation.

B. Brahmacharini : The one whose only disposition is to merge with Brahmanand who behaves accordingly is Brahmancharini.

C. Chandraghanta : The one at whose doorstep the Alhad-bestowing (Alhadkari) moonshines constantly. Alhad is the combined state of affection, mercy and motherly love.

D. Kushmanda : The whole of the universe afflicted by the trividha tap (Three types of suffering -Adhyatmik, Adhidaivik and Adhibhoutik) exists in Her belly.

E. Skandamata : ‘Bhagaha’ means radiance. Bhagawati is thus‘Radiance consisting of vibrations with a specific ability.’ The unionof Deity Brahma and Bhagawati produced a specific composition of rays called Sanatakumar or Skanda. The Saptalok (Sevensuperior subtle regions) from the Bhulok to the Satyalok are referred to as Skandaresha (Skanda lines). The Skanda line controls the energy from each of the regions from the earth to the Satyalok. Vyahruti means mysterious sound or mantra. The controller of all these seven regions is Skandamata. Thus, Skandamata is the one whose assistance is required to cross the seven regions.

F. Katyayani : Katyayani is the daughter of Katyayan. Ayan is a part consisting of numerous constellations of stars. The guardian of one such galaxy(Ayan) is Sage Katyayan. Once a group of powerful unfavourable waves from the galaxy of Sage Katyayan attacked the Deities (or radiance) from that very galaxy. Due to the friction between these two groups, a catastrophe became imminent. It was then a small part of the subtlest wave of energy entered the Ashram of Sage Katyayan in the form of a little girl. Sage Katyayan considered her as His own daughter. Hence, she came to be known as Katyayani.

H. Mahagouri : One who acquired gour (Radiance) by austerities is Mahagouri. In the Mantra yogasamiksha, the word samadhi (Superconscious state) is derived from sam + a+ dhi. ‘Sam’ means the balanced subtle-most energy waves, ‘a’ means up to and ‘dhi’ means the vibrations, which are constantly generated from the human body. The process of conversion of these ‘dhi’ vibrations to the balanced state of the subtle-most energy waves is called the superconscious state. The process of attaining the superconscious state repeatedly is called austerity. If such penance is undertaken for a particular duration then one acquires gour (Radiance). The one who has acquired the supreme state of this radiance and by whose grace can one attain the superconscious state is ‘Mahagouri’.

Vedas
The most sacred Hindu scriptures, revealed directly by God
Tama
One of the three components in the Universe denoting inertia and ignorance
Dharma
Righteousness
Ashram
A place where a seeker can remain engrossed in spiritual practice through spiritual discipline
Anand
Bliss
mantra
A syllable or words representing spiritual reality or an aspect of God uttered to protect oneself or to achieve a specific goal