In this article you will get valuable information on Rudra, Kalabhairav, Veerabhadra, Bhairavanatha, Nataraj etc forms of Shiva and their mission. The vastness of Shiva’s functions will also become clear though this article.

Meaning : One who makes others cry is Rudra.

2. ‘Ru (रु) means to cry, and dru ( द्रु ) means to run. Rudra is the one who cries, one who makes others cry and one who runs while crying. One who cries so that God manifests before him. One who wails to attain Liberation, is Rudra.

4. Rutan means the truth, that is, the Upanishads composed of words. One who has realized or expounded the truth is Rudra.

5. Rutan is speech consisting of words or the knowledge of self-realisation expounded through this medium. One who bestows this to the worshippers is Rudra.

6. Another name of Rudra is Vrushabha. The word Vrushabha has evolved from vrush. It has two meanings – one who showers rain and one who has high reproductive ability. There is a clear mention in a Rudra-related mantra in Rugveda that Rudra showers rain and therefore, the plants bloom. Today, the word Vrushabha is used to refer to a bull. The reason is that the bull possesses high reproductive ability (fecundity).

They are Rudra’s subordinates who remain in His proximity and serve Him. Bhutanatha, Vetal, Uchhushma, Pretaputan, Kubhanda are the attendants created by Rudra. The attendants of Rudra don attire similar to that of their master. They reside in Heaven, destroy evildoers, protect the righteous, observe the pashupat vrat (A type of Vowed religious observance), vanquish obstacles in the path of the Yogis and perpetually serve Shiva. 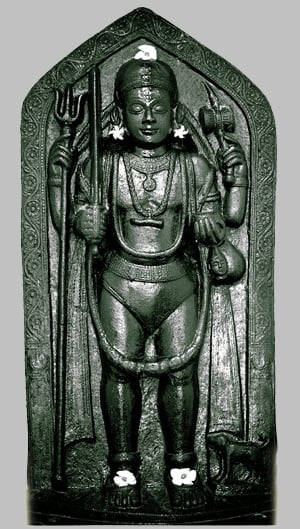 He is one of the eight Bhairavs, created from Shiva’s anger. After Shiva had the fifth head of Brahma severed through Kalabhairav, He directed Kalabhairav to stay at Kashi, a place of pilgrimage in Uttar Pradesh, Bharat (India) . Kalabhairav is also referred to as the guardian of Kashi. Upon entering Kashi, first we have to pay obeisance to Him. When returning from His worship, we have to tie His black thread around our arm. 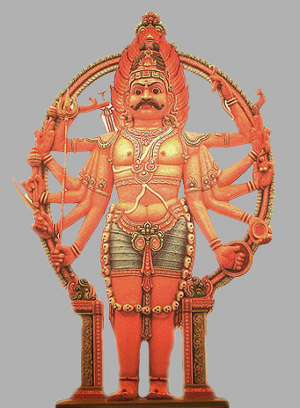 Yamadharma and the chief of the southern region Veerabhadra, are also attendants of Shiva. Veerabhadra is the only Deity who is directly associated with the southern region; hence, He is the master of spirits and is known as Bhutanatha. He has made Vetal His vehicle. A legend says that it was Veerabhadra who first ritualistically worshiped Shiva in the form of His linga (a symbol for the worship of Shiva). 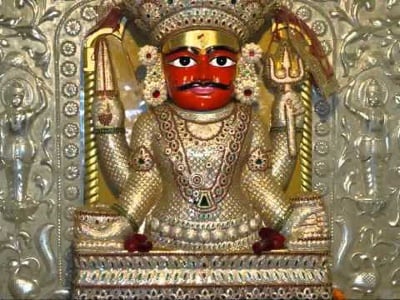 The text Shiva-Agam describes sixty-four types of Bhairavs. Eight Bhairavs constitute one category. The chiefs of these eight categories are renowned as Ashtabhairav, Kalabhairav and Batukbhairav. The Tantra texts consider the sixty-four Bhairavs as the masters of the sixty-four Yoginis and display close association between Shakti (Divine Energy) and the Bhairavs. It is said that a Bhairav guards every Shaktipeetha (Seat of Divine Energy). The Holy text Mahapeethanirupan says that ritualistic worship of Shakti performed without the inclusion of the Bhairav is wasted.

In Maharashtra, generally Bhairav is worshipped as the village Deity. He is referred to as Bhairoba or Bahiroba or Viroba. The Deity has its seat in almost every village in a snake-hole or a smashan. At times it is in the form of an Idol or in the form of a round stone. It is said that at night He roams on horseback and is accompanied by a black dog. Bhairav is an inferior Deity and hence, is not worshiped from the perspective of spiritual practice.

C. One who reduces distress caused by a negative energies

This is the Kapalik form of Shiva. Amongst the people, this form is as popular as Shiva Himself. The spirits dance merrily in front of Him. Bhagawati Uma (also in the same attire) accompanies Him. While the Shaiva sect was in supremacy, this form of Shiva gradually disappeared only His association with the dance remained. With the evolution of this dance form, the Idol of Shiva as Nataraj came into existence.