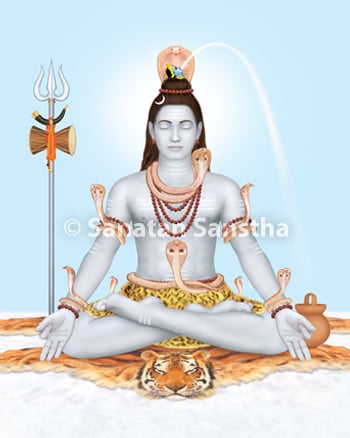 Mahashivaratri is celebrated with great enthusiasm all over the country. The vrat (Vowed religious observance) of Mahashivratra is performed on the fourteenth day in the dark fortnight of the Hindu lunar month of Magh. This year Mahashivaratri is on 11th March 2021.

Fasting, worship and remaining awake the whole night are the three aspects of this vrat. The ritual of the vrat is as follows – one should have only one meal (ekabhukt) on Magha Krushna Paksha Trayodashi (Thirteenth day in the dark fortnight of eleventh month of the Hindu lunar almanac). On the next day, that is, Chaturdashi morning, the sankalp (Resolve or intent) for the vrat should be made. In the evening, bathe in a river or a lake according to religious restrictions. Wear a rudraksha mala and apply bhasma (Holy ash). At the time of Pradosh, go to the temple of Deity Shiva, meditate, perform Shodashopchar-puja (Ritualistic worship involving sixteen specific substances) and offer water to Shiva-Parvati. Deity Shiva should be offered 108 lotuses or bel leaves, accompanied by chanting. Then Arghya (An oblation of water to God) should be performed after offering flowers. After worship, recitation of verses and chanting of moolmantras (the primal mantra), the flower offered to Deity Shiva should be taken and kept on one’s head. Also, one should ask pardon for the sins committed.

This year, in some places due to the corona pandemic, there may be limitations on performing this vrat as usual. What should one do in such times? What are the steps to be taken to obtain the benefit of Shivatattva (Principle of Deity Shiva) on Mahashivaratri? Here are some helpful tips and perspectives on this.

Note : These tips are only for those who have restrictions or limitations for observing the vrat of Mahashivaratri at their locations as usual. Where it is possible to observe the vrat and visit temple as usual by abiding all the rules of administration, it should be done as per usual practice. A. Due to the restrictions imposed to curb the spread of Corona pandemic, those who cannot visit the Shiva temple on Mahashivaratri should worship Shivaling at their home.

B. If Shivaling is not available, one should worship the picture of Deity Shiva.

D. If none of the above is feasible, then one can write Deity Shiva’s chant ‘ॐ नमः शिवाय ।‘ and worship it.

These points are also applicable to those who fast on Mondays in the Hindu lunar month of Shravan and perform ritualistic worship of Deity Shiva.

Chanting the Name of God is the recommended spiritual practice for Kaliyug. Chant ‘ॐ नम: शिवाय ।‘ (Om Namah Shivay |) as much as possible in order to avail spiritual benefit from the Principle of Deity Shiva which is 1000 times more active on the day of Mahashivaratri, One should possess spiritual emotion of paying obeisance to Deity Shiva while chanting. 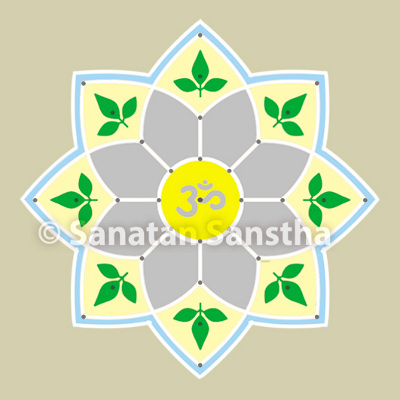 There is a fear of second wave of Corona pandemic everywhere right now. Natural disasters are occurring in many parts of the world. India-China relations are strained. These incidents are signs of coming adverse times. The calamity has begun, as many saints and astrologers have predicted. If you want to survive in these calamitous times, you need spiritual power. Therefore, even though there are limitations in performing the vrats as usual, one should not feel discouraged and should pay more and more attention to ones’ spiritual practice. On the occasion of Mahashivaratri, let us surrender ourselves to the holy feet of Deity Shiva and pray with submission, ‘O Shiva Shambho, give us strength, intellect and inspiration to do sadhana. Let the difficulties and obstacles that come in the way of our sadhana get eliminated.’

Sankalp
Resolve
Rangoli
Holy designs made from white crushed powder
Pradosh
The period of 72 minutes (3 ghatikas) before sunset on the 13th day of the bright and dark fortnight of every Hindu lunar month.
Kaliyug
Era of strife (The present era, amongst the four eras)
Arghya
Water offered to the Lord as a token of respectful greeting
mantra
A syllable or words representing spiritual reality or an aspect of God uttered to protect oneself or to achieve a specific goal