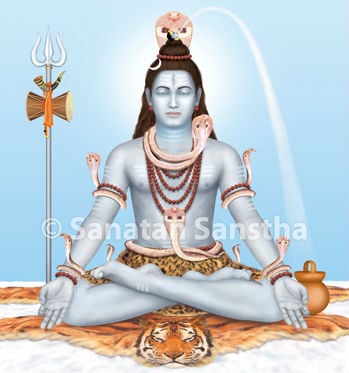 1. Excellent servitor of the Guru

Deity Shankar has tremendous faith in Mahavishnu. He installed Ganga flowing beneath the feet of Mahavishnu on His head.

Shiva is the only Deity who chants continuously. He is perpetually seated in meditation (locked in a posture of meditation). To neutralise the heat generated in His body by performing severe austerities, Shiva makes use of cooling agents such as the river Ganga, the moon, serpents etc. and lives in the snowclad Kailas mountain.

If Deity Shiva stops His chanting on His own then He remains calm but if someone makes Him stop it by creating an obstacle (like Deity Madan the deity of love did) then the heat generated from His spiritual practice suddenly manifests and as the one opposite Him cannot tolerate it he gets annihilated. This phenomenon itself is referred to as ‘annihilation by Shiva’s opening His third eye’. If the one trying to trouble him experiences 100% distress then Shiva experiences only 0.01% distress. This gets Deity Shiva out of His meditation but His posture (asan) remains unchanged. Then Shiva goes into meditation again.

Despite all objects of sense pleasure being available to Him His subconscious mind remains unblemished, it remains steady. Even when Deity Parvati is seated on His lap He remains unblemished, untouched by sexual desire. Such is Shiva who has conquered the sense organs.

5. The one prepared to undergo any amount of distress to make another happy

The poison created from churning of the ocean (samudramanthan) was icinerating the whole earth. No Deity was prepared to drink that poison. But Deity Shiva did. He drank the poison and saved the earth from destruction. The poison made His throat blackish blue from which He has derived one of His Names, Nilkanth (the one with a blue throat).

6. Pacifier of the uncontrollable anger of Mahakali

When annihilating demons Mahakali became terrifying like a dangerous storm and could not be controlled. So Deity Shankar assumed the form of a corpse and placed Himself on the pathway of Her dance. Annihilating demons She finally reached the corpse of Deity Shiva. No sooner did She step on it than Her fearsome dance ceased, Her anger was pacified. Such is the Principle of Deity Shiva, the Supreme Principle. – Gurudev Dr. Kateswamiji

7. The one who is pleased easily
(Ashutosh) and the one giving anything after He is pleased

Once pleased with Ravan Deity Shiva had gifted him an atmalinga (soul). (Ravan wanted to make use of it to become Shiva.)

8. The Deity with both Deities and demons as His devotees

Inferior Deities, some Deities residing in heaven (swargalok) and Shri Vishnu Himself are also worshippers of Deity Shiva. His characteristic is that demons too are His devotees. Demons Banasur, Ravan etc. neither worshipped Shri Vishnu  nor did Shri Vishnu give them a boon but they worshipped Deity Shiva who granted them a boon. Each and every time it is Shri Vishnu who has deferred a situation arising from granting of these boons.