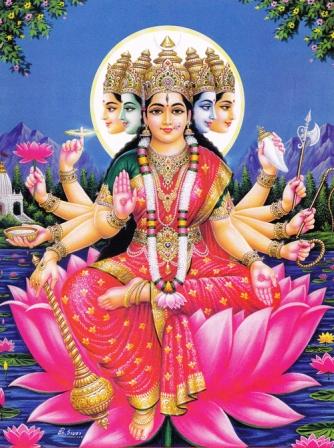 We are all well versed with the Gayatri mantra and many of us chant it. Let us now offer obeisance at the Holy feet of Gayatri Devi and learn about Her.

1. The story of the origin of Gayatri Devi

‘Before commencement of the Satyayug Deity Brahma created Deities. After the commencement of the Satyayug the radiance (tej) of Deities did not reach man because They were in a Nirgun (non-materialised) state to a greater extent. To convert the Nirgun Principle from Deities to the Sagun (materialised) Principle Shri Ganesh required a Divine Energy (Shakti). That is why Deity Brahma created Gayatri Devi using the combined Principles of Deities Saraswati and Savitru.’ – (Reference : Knowledge received in the subtle)

2. Meaning of the word Gayatri

The word Gayatri originates from – ‘गायन्तंत्रायते।’, meaning ‘the One who protects through singing (recitation of a mantra)’ and ‘गायंतंत्रायंतंइति।’ meaning ‘the one who makes the body sing (creates subtle vibrations of the mantra in the body) due to continuous recitation of the mantra, generating the saviour energy in the individual reciting it.’  – Reference (Sanatan’s Holy text : Mantrayoga)

In the Atharvaveda Gayatri is called Vedamata. Since Gayatri Devi has originated from Deity Saraswati sometimes She is referred to as Savitri. She is also labelled as Ganesh Gayatri, Surya Gayatri, Vishnu Gayatri etc.with reference to Names of mantras.

Her abode is on the way from Brahmalok to Suryalok. This being a sub-region of Brahmalok it is called ‘Gayatrilok’. Victory slogans of Vedic mantras are recited continuously in this region and golden light is spread everywhere with no trace of darkness. The atmosphere in this region is enriched with enthusiasm and bliss. Worshipers of Deity Gayatri attain Gayatrilok after death. Some devotees of Deity Surya too attain a status in this region.

5. Proportion of the three components (gun) in Her (%)

7 B. Types of energy

‘Gayatridevi is mounted on a red lotus signifying wealth and opulence. She has five heads – namely Mukta, Vidruma, Hema, Neela and Dhawala. She keeps vigil over the ten directions with Her five pairs of eyes. Her eight hands hold a conch, Divine discus (sudarshan chakra), axe, noose, japamala(rosary), mace, lotus and a bowl of payas (which is offered to Her as naivedya). Her ninth and tenth hands are in postures endowing blessings and protection respectively.

8 B. Her second form

Gayatri Devi mounts a swan. She has two arms – one hand holding the Vedas representing spiritual knowledge and the second bestowing a blessing.’ – Reference (Website)

9. Her mission and special features

9 A. She is of the nature of Adishakti (The Primal Mother)

Gayatridevi is the form of the three Deities – Saraswati, Mahalakshmi and Parvati and is of the nature of the Primal Mother (Adishakti).

9 B. The functional energy of Deity Brahma

9 C. Providing radiance to the 12 Adityas and the Sun Deity

Deity Gayatri receives radiance from Savitru which She transmits to the twelve Adityas (messengers of Deity Surya). Gayatri Devi Herself is the Divine Energy providing gross energy to Deity Surya as She possesses sixteen-fold more energy than Him.

Recitation of the Gayatri mantra causes manifestation of unmanifest energy and divine consciousness in the Deities, in different forms, and becomes functional leading to early bestowal of grace of Deities.

As part of obeisance unto Gayatri Devi, Her idol is worshiped.

10 B. Recitation of the Gayatri mantra

The benefit of reciting the Vedas is obtained when the Gayatri mantra is recited at twilight and during the spiritual rite of thread ceremony.

The Savitrukathayayag (note) and the Gayatriyag are fire sacrifices performed to appease Deities Savitru and Gayatri respectively.

Note: The Savitrukaythyayag is performed to please Deity Savitru and was performed thousands of years ago at Pithapur, Andhra Pradesh by Sage Atri as mentioned in the biography of Shripadshrivallabh. Reference to this yag is also found in the Scriptures.

11 A. The Gayatri mantra

‘This being a fourteen worded mantra it is associated with 24 Deities residing in 24 spots in the physical body. It is a fortified mantra.

11 A 1. Origin and meaning of the Gayatri mantra

Om is the word which originated first and the main Gayatri mantra arose from that. That is why the Gayatri mantra is called the ‘king of all Vedic mantras’. The main rhythm (chand) in the mantra is that of Gayatri. However it has to be recited as a mantra otherwise it remains a mere chant (Jap).’ – Reference Sanatan’s Holy Text : Mantrayoga)

11 A 3. Meaning of the Gayatri mantra

Change in words for easy comprehension of the shloka (Holy verse)

Meaning : We worship the greatest radiance of Deity Surya, which inspires our intellect.

11 A 4. Associated Sages and Deities

Vishwamitra being the Sage of this mantra, its Deity is Savitru.

11 A 5 A. The Tripadgayatri (three step Gayatri mantra) : Om appears before the mantra thrice.

When reciting this the first step is during inhalation, second when holding the breath and third when exhaling. The proportion of purak (inhalation), kumbhak(breath holding) and rechak (exhalation) in the pranayam (regulated breathing) is thus 1:4:2.

This has three Oms as in the Tripad Gayatri, the fourth Om is suffixed to prachodayat. As a result kumbhak (breath holding) occurs after rechak (exhalation).

11 A 6. Gayatri mantras of different Deities

Different Deities have different Gayatri mantras e.g. based on the need Saints advice the required Gayatri mantra of a particular Deity such as Krushna, Rama, Saraswati etc.

11 A 7. Benefits from recitation of the Gayatri mantra

Recitation of the Gayatri mantra purifies the subtle body making it conducive to absorb the Divine energy generated in the embodied soul, by recitation of Vedic mantras.

11 A 7 C. Holistic purification of the embodied soul

Recitation of the Gayatri mantra alleviates obstacles in flow of vital energy thus purifying the blood vessels, 72000 nadis / spiritual channels and every cell within the embodied soul.

Worship of Deity Gayatri makes study of the Vedas easier.

11 A 7 E. Facilitates those worshiping as per Karmakand (Path of Rituals)

11 A 7 G. Periodic chanting of Gayatri Mantra endows liberation from the cycle of birth and death

If recitation of Gayatri Mantra is done regularly with spiritual emotion and faith throughout once lifetime, then Deity Gayatri becomes pleased and that person gets liberated from the cycle of life and death and attains Moksha.

12. As advised by Dr. Mohan Phadke, a mantra
expert from Pune, reception of Spiritual experiences
after drinking water charged with recitation of the Gayatri mantra

Two months ago, Dr. Mohan Phadke, an expert in mantras visited Sanatan’s Ramnathi ashram. He advised me to drink water charged with the Gayatri mantra every day to reduce the fat in my body. I started charging the water in a copper tumbler by reciting the Gayatri mantra 108 times placing the fingers of my right hand in it. When I touched the water after the recitation, I realised that it was hot due to generation of heat. I continued this ritual for a fortnight and observed the following effects in myself.

12 A. Perception of a thick black envelope of
negative energy around my body undergoing dissolution

I realised that after drinking this charged water the thick covering of negative energy around my physical body, mind and intellect was undergoing dissolution and that the mind was becoming enthusiastic and refreshed with new thoughts.

12 B. Creation of new energy in the physical body

I perceived that positive energy was being created in the region of my navel and was spreading till my Adnya and Sahastrar chakras.

12 C. Perception of hot waves emanating from different parts of my physical body

When chanting the mantra, I perceived hot waves emanating from my ears, eyes, lips, cheeks, palms and soles.

12 D. Different kinds of physical distress
due to intolerance of energy in the Gayatri mantra

After drinking the Holy water (tirtha) charged with the Gayatri mantra for fifteen consecutive days as I was unable to tolerate the energy within it, I began to experience abdominal cramps and developed ulcers in the mouth. So, I started drinking water charged with the mantra only 21 times. Then all that distress stopped completely.

Information for this article was received with the grace of Deity Gayatri Herself. I offer gratitude a million times at the Holy feet of the Devi. Let us pay gratitude with devotion and let us pay obeisance unto the holy feet of Deity Gayatri, who transmits the warrior radiance (kshatratej) of Deity Sun and Brahma Tej ( radiance of brahma) of the Vedas to the man.

Vedas
The most sacred Hindu scriptures, revealed directly by God
Tama
One of the three components in the Universe denoting inertia and ignorance
Satyayug
The first in the cycle of four eras since the origin of the Universe
Naivedya
Food offered to the Deity as a part of ritualistic worship
Karmakand
Ritualistic worship
Ashram
A place where a seeker can remain engrossed in spiritual practice through spiritual discipline
Sattva
One of the three components in the universe, signified by purity and knowledge
mantra
A syllable or words representing spiritual reality or an aspect of God uttered to protect oneself or to achieve a specific goal