1. Picture depicting the subtle-characteristics
of ‘Sattvik picture of Deity Shiva’ made by Sanatan 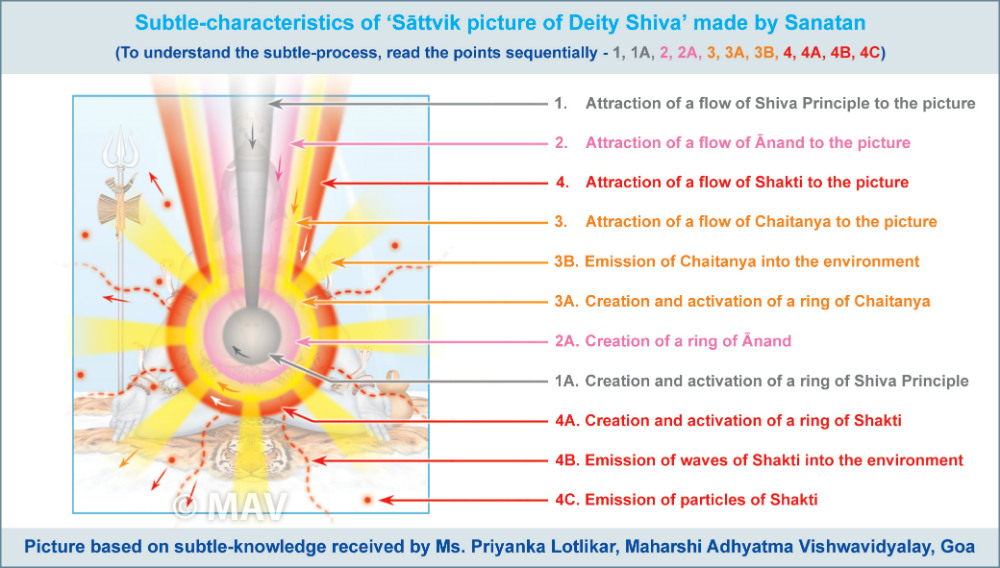 Proportion of vibrations in the picture based on subtle knowledge is as follows – Shanti (Serenity) 4%, Shivatattva (Principle of Deity Shiva) 4%, Anand 2%, Chaitanya (Divine consciousness) 3% and Shakti (Divine Energy) 4%.

B. Upon looking at every organ of Deity Shiva, we get the spiritual experience that various vibrations such as Shakti, Chaitanya, Anand, Shanti etc. are active.

C. I felt as if the picture had come alive and the serpent, Ganga etc. were activated

Upon looking at the picture for a long time, because of the Divine sagun vibrations inherent in it as well as that attracted to it, I perceived that the objects (The serpents on the right and left hand, the flowing Ganga and the saffron colour cloth on the damaru (An hourglass shaped drum associated with Deity Shiva)) had become active.

D. The nirgun vibrations (of Shanti) are perceived in greater proportion in the picture.

E. In the spiritual experience of Shanti, superior-level Shakti is also perceived in the picture.

F. Special characteristics of picture of Deities made by Sanatan :

Since different vibrations are emitted by Sanatan’s pictures of Deities as per the need of respective individuals, it becomes difficult to draw their pictures based on subtle-knowledge

Emission of different vibrations are perceived from every organ of the Deities in Sanatan’s pictures as per the need of an individual. Hence, it is very difficult to draw their pictures based on subtle-knowledge. For example, sometimes the vibrations of Shanti are emitted by Deity Shiva’s eyes and sometimes those of Shakti. This puzzles the mind on how to show them in a picture based on subtle-knowledge. (Different vibrations are emitted by Sanatan’s pictures of Deities depending on the distress and need of the individual who looks at them.)

2. Chaitanya enriched nature of ‘Pictures of Deities’
made by Sanatan proved through pendulum technique

In the beginning of the year, I purchased ‘Sanatan Almanac 2012’. The percentage of Deity Principle in each picture of the Deity in the Almanac was mentioned underneath it. I measured this percentage using a pendulum and the results matched to the second decimal point. In this way, since I experienced the sattvikta of the pictures, I displayed the Almanac in my office and distributed ‘Sanatan Almanac 2012’ too. – Mr. Nandakumar Mungekar (Architect, Environmentalist and Pendulum-analyst), Dadar, Mumbai

3. ‘Sattvik Name-strips of Deity Shiva’ made by Sanatan

4. Picture depicting subtle-characteristics of
‘Sattvik Namestrip of Deity Shiva’ made by Sanatan 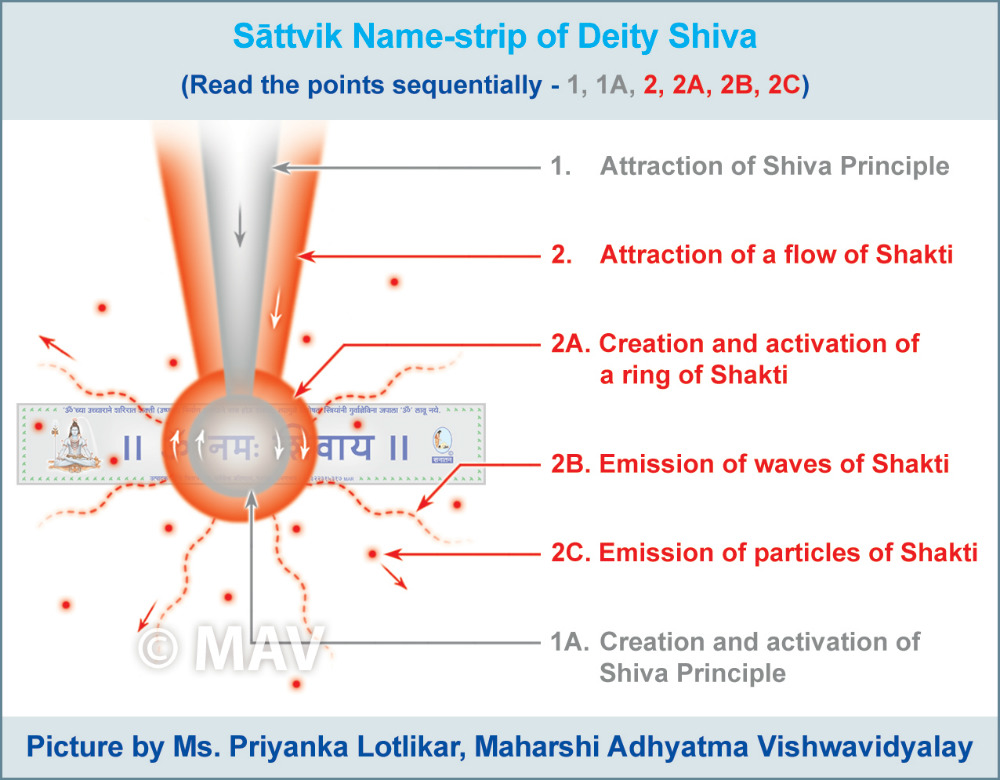 B. Proportion of Vibrations

Proportion of other vibrations experienced is as follows – Shanti 4%, Shivatattva 4% and Shakti 2%.

1. Chanting takes place automatically due to this Name-strip.

2. Due to the void created by the roundness of the letters in the Name-strip, it obtains nirguṇtattva in a greater proportion.

3. When we look at the Name-strip for a long time, the letters begin to move, and after some time, it is perceived that there are no letters at all.

D. Difference between a Deity’s form and Name

1. In the picture of a Deity, its saguṇ form manifests. Hence, the proportion of Tej-tattva is greater in it.

2. Deity’s Name attains oneness with the Deity’s nirguṇtattva to a greater extent. Hence, the proportion of akash-tattva is greater in the Name-strip.

2 A. With the help of Deity’s Name, it is possible to merge with the original Principle of the Deity.

2 B. The beejmantra in the Deity’s Name generates energy in the body and hence, the body obtains the energy to function.