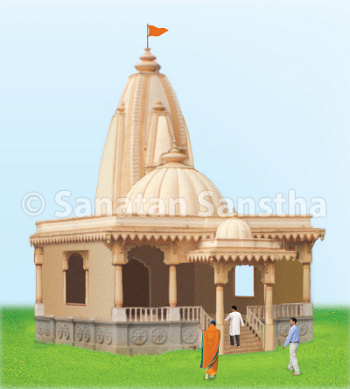 Prevent malpractices and denigration in temples

2. Do not make noise inside the temple or in the garbhagruha (sanctum sanctorum). Noise not only reduces the sattvikta of the temple, but also disturbs the devotees who are chanting or meditating there.

3. Many a time, devotees are forced to place money in the donation plate. Do not fall prey to such demands, refuse politely.

It is the duty of every devotee to maintain the sattvikta of the temple; hence, educate the devotees visiting the temple, priests and trustees of the temple etc. on the above mentioned malpractices.

Act to prevent denigration of Deities

1. Protest against anti-Hindus and exhibitions they organise in which they publicly display nude and derogatory pictures of Hindu Deities.

3. Stop those who dress up as Deities and beg.

4. Lodge complaints with the local Police whenever religious sentiments are hurt because of denigration of Deities.

5. Participate in the mission of Sanatan Sanstha and Hindu Janajagruti Samiti for protection of Dharma :

Over the past years, Sanatan Sanstha and Hindu Janajagruti Samiti have been protesting in a lawful manner against the denigration of Deities and Saints, malpractices taking place during Religious festivals, anti-Dharma bills like ‘Prevention and eradication of human sacrifice and other inhuman, evil and aghori practices and black magic’, take-over of temples by the Government etc. O devotees ! You too should participate in this mission to discharge your duty unto Dharma and thus, obtain supreme grace of the Deities. ‘धर्मो रक्षति रक्षितः ।’ that is, Only when we protect Dharma, Dharma (God) will protect us !