How to celebrate Ganesh Jayanti ?

Chant the name of Shri Ganesh !

To increase devotion and spiritual emotion and to derive maximum benefit from the increased Principle of a Deity, it is absolutely essential to pronounce the Name of the Deity appropriately. Let us listen to the below audio clip to understand the correct method of chanting the Name of Shri Ganesh.

On the auspicious occasion of Shri Ganesh Jayanti, the devotee or seeker (sadhak) should chant Deity Shri Ganesha’s name for 3 to 9 turns of a japa mala (108 stringed beads). The chant is ‘Om Gan Ganapataye Namaha’.

If the font is sattvik, the words contain Chaitanya (Divine consciousness). Sanatan Sanstha has prepared Name-strips of Deities with sattvik fonts and sattvik border designing that matches the Deity’s Principle. These chant-strips attract and emit the specific Deity’s Principle in a higher proportion. Placing the chant-strip in the house creates sattvikata (increase in positivity) in the house and also reminds us to chant the Deity’s name.

There are two poplular stotras of Deity Shri Ganesh. One  one of them is the Sankasht-nashan stotra, which was composed by Devarshi Narad. It includes 12 Names of Shri Ganesh. This stotra should be recited thrice a day in the morning, afternoon and at dusk, for fulfillment of all desires.

Join our online satsang to learn more about festivals and spiritual practice !

On Shri Ganesh Jayanti, due to the increased principle of Deity Shri Ganesh in the atmosphere, many devotees get spiritual experiences. Join our online satsang to learn how to celebrate various festivals, how to do Sadhana (spiritual practice) !

Before starting the Deity Shri Ganesh Puja, do the following prayers.

A. O’ provider of intelligence, Shri Ganapati! Provide me with a virtuous intellect. O Vighnaharta (Vanquisher of all obstacles)! Remove all sufferings from my life!

B. O’ Shri Ganapati! You are the one who provides Pranashakti (Vital energy). Provide me with enough Shakti to work with enthusiasm throughout the day!

C. O’ Shri Ganapati! Through this worship, let devotion and bhav (Spiritual emotion) unto you develop in me!

D. O’ Shri Ganapati! By your grace, let me be able to imbibe maximum Chaitanya (Divine consciousness) emitted from this worship.

How to offer gandha, haldi and kumkum to Deity Ganesh? 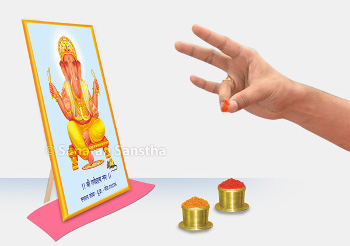 While performing Panchopachar puja, gandha (sandalwood paste) is applied to the Deity with the ring finger of the right hand. Thereafter, haldi (turmeric powder)-kumkum (Saffron) is offered at the Deity’s feet by taking a pinch of each between the thumb and ring finger of the right hand. Haldi is offered first followed by kumkum. The mudra formed by joining the tips of the ring finger and the thumb awakens the Anahat-chakra in the body of jiva and helps awaken the kriya-shakti (energy of action) in the jiva.

Which flowers should be offered to Deity Shri Ganesh? 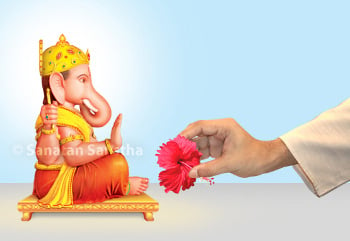 The complexion of Shri Ganapati is red. Red clothes, red flowers and raktachandan (Red sandalwood) are used in His puja (ritualistic worship). The red colour of these substances attracts pavitraks of Shri Ganapati from the atmosphere to the Idol in a greater proportion and helps in its awakening.

Why are durva offered to Deity Shri Ganesh? 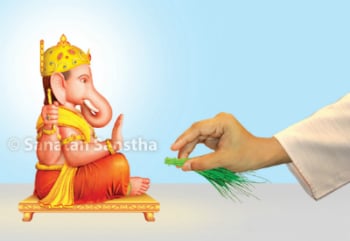 Aarti should be sung after worshipping Deity Shri Ganesh. Sattvikta and bhav (spiritual emotion) in the Aarti depends upon the bhav of the individual singing it. The more the bhav of the individual singing the Aarti, the more the Aarti becomes enriched with bhav and sattvikta. Such an Aarti reaches the Deity faster. The sattva component and chaitanya generated by the words in the Aarti depend on the pronunciation, pace of pronunciation and pronouncing the words together or separately.

This app gives information about the scientific reasons underlying the worship and religious actions pertaining to the worship of Deity Ganapati, and its benefits. This app has been created as an attempt to make every effort made by an individual for God realisation to occur from the spiritual perspective and to derive benefit from it.

This App is a collection of sattvik stotras, shlokas, artis and chants of Deities. This App contains Chaitanya-enriched audios recited in the sattvik voice of Saints and seekers who perform spiritual practice. Their recital is in a bhav-enriched voice with pure and appropriate pronunciation, pure language and in a scientific manner. This app is available in Marathi, Hindi, English and Kannada languages.