2. The tandav dance and its seven types

Everyone is familiar with Shiva’s Natraj form, especially one who is associated with the fields of art and literature. In this article you will find information on this form of Shiva. 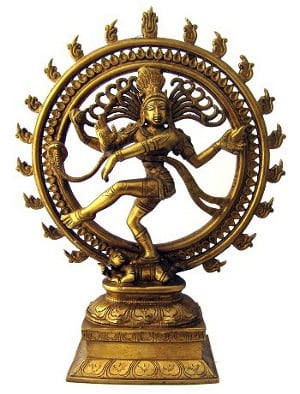 Shiva is believed to assume two states – the samadhi (Superconscious) state and the tandav or lasya dance state. The samadhi state is His nirgun (Non-materialised) and tandav or lasya dance state is His sagun (Materialised) state. Body movements performed to depict a particular event or issue is known as natan or natya. The one who performs this natan is a nat (Actor). Traditionally, it is believed that Natraj is the promoter of dance. Since Shiva is the pioneer amongst actors, the title of Natraj is accorded to Him. The universe is His dance school. Just as He is the dancer, He is its observer too. Natraj plays the role of bringing about activity in the universe through the commencement of His dance and merging the visible and invisible Creation into Himself when He stops it. Thereafter, He remains alone, engrossed in Anand . In short, Natraj is the manifest form of all activity of God. Natraj’s dance is considered to represent the five actions of God, namely Creation, Sustenance, Dissolution, the covering of the Great Illusion and initiation (God’s grace to get liberated from the Great Illusion).

The tandav dance and its seven types

Origin of the tandav dance is explained as follows

Meaning : Then Shiva remembered and showed the uddhat dance (that He had performed earlier) to Sage Bharat through the chief of His attendants (known as Tandu). He also made Parvati perform the lasya dance with great enthusiasm in front of Sage Bharat. Lasya is a dance performed by women, wherein the hands remain free. Realising that the dance performed by Tandu was tandav, Sage Bharat and others later taught these dances to mankind. The dance form in which the sound emitted by every cell in the body is Shivatattva-predominant, is known as the tandav dance. It is a dance performed by males and consists of mudras; for instance, the dnyanmudra is performed by touching the tip of the thumb to the index finger. As a result, the mounds of Jupiter and Venus get joined, meaning, the male and female unite.

This dance form has seven types –

Of these seven types, the verse Shivapradosha (or pradosha) describes the Sandhyatandav as – Shiva offers Gouri, the Creator of the three worlds, a throne studded with precious stones and performs this dance in the evening. When Shiva dances, Saraswatidevi plays the veena (A stringed musical instrument), Indra plays the flute, Brahma keeps the rhythm, Lakshmidevi sings, Vishnu plays the mrudanga (A type of drum) and all the other Deities stand around and watch the dance. In this dance, Shiva has two arms, and the scene of a demon being crushed under His feet is absent.

Of the seven types mentioned above, the Gouritandav and Umatandav are fearsome in depiction. In these dances, Shiva assumes the form of Bhairav or Veerabhadra and is accompanied by Gouri or Uma. He performs this fearsome dance with the spirit attendants in a smashan where the corpses burn.

Among Natraj’s sattvik dance forms (with the Sandhyatandav), the nadanta dance is also renowned. The world-famous Idol of Natraj at Chidambaram is in this very posture. Followers of the Shaiva and the Shakta sects consider these dances to be symbols of specific Principles. In their opinion, during such a destructive, fearsome dance, Shiva not only destroys the world but also frees jivas (Embodied souls) from bondage. The smashan is selected for the dance to depict that the ego of the jiva is reduced to ashes. Deities as well as demons are enthusiastic to accompany Shiva during the tandav dance.

The table given ahead shows how significant the various postures adopted in a tandav dance are.

Note 1 – Abhinaya : The word is formed thus – abhi + naya. Abhi means well organised, solid and naya means emotion. Abhinaya (Acting) generates energy. The science of drama by Bharatmuni is referred to as the fifth Veda. (Back)