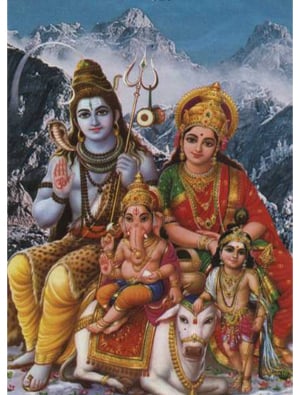 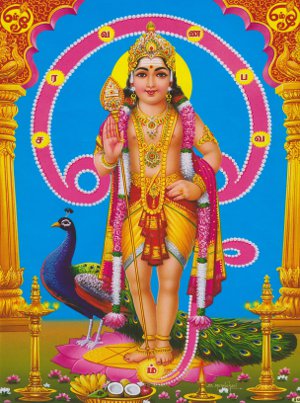 He is the son of Deity Shiva and Devi Parvati. He is named Kartikeya because He was nurtured and brought up by Deities of the constellation of six stars known as Krutikas. The story about Kartikeya goes thus – After Kartikeya slayed the demon Tarakasur, He became well-known. As a result, Devi Parvati began pampering Him. Excess of pampering spoilt Him and He began molesting the consorts of the female Deities. The Deities complained about Him to Devi Parvati. In order to subdue His boisterousness, Devi Parvati began to manifest Herself in every woman He saw. This manifestation induced a feeling of repentance in Kartikeya and He swore that from then on, He would view every woman in the world as His mother. The Shivalilamrut narrates a story in which Kartikeya has cursed women thus – “Women who come to pay their respects to me will be widowed for seven births”. However, there is no evidence of this in the Puranas (The eighteen sacred Holy texts compiled by Sage Vyas). In Maharashtra, Kartikeya is a celibate; while in South Bharat He has two wives. In West Bengal, in the Hindu lunar month of Kartik, a kshanika (An earthen Idol) of Kartikeya is worshipped by women desirous of bearing a son. This Idol holds a peacock feather in His hand, not a staff. Shivagana reside in Shivalok (Deity Shiva’s abode). Shivagana are servitors. They control the Mahayoni (Divine birth passage) and the pavitraks (Subtle most particles containing Chaitanya (Divine consciousness)). When spirits come into contact with purity, they are saved from the effects of destiny and become Shivagana in Shivalok and obtain a type of Anand called as mod. The different types of Shivagana are as follows :

a. Ugraganas : They undertake spiritual practice of the form of Deity Shiva known as Ugreshwar.

b. Rudragnas : Rudra means one who cries. They cry, yearn for a vision of God.

The functions and spiritual practice of each of these three types of Shivagana are different. Some Shivagana come to Deity Shiva from Deity Yama’s abode, while others approach Him through Nandi, the bull, as a medium. The colour and the organs of each of the Shivagana are different. Nandi, Shrungi, Bhugiriti, Shaila, Gokarna, Ghanṭakarna, Veerabhadra and Mahavikaṭa are considered to be the main groups of Shivagana. 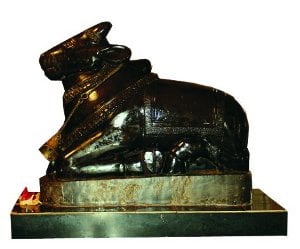 Nandaha means full of Anand . Nandi means blissful. Nandi is a prominent Shivagana (Assistant of Deity Shiva) and is referred to by various names like Nandisha, Nandishwar, Nandikeshwar. Information on Nandi as per two different schools of thoughts is as follows.

1. A sage named Shilad appeased Deity Shiva after rigorous austerities, to be blessed with a knowledgeable son. At that point, Deity Shiva replied, “Since there cannot be anyone omniscient like me, a fraction of me will become your son; however, he will die on completing sixteen years of age”. After a few days, Shilad was blessed with a son, who was named Nandi. Nandi worshipped Deity Shiva. On completion of sixteen years of age, Deity Yama threw the noose of death around Nandi, who was engaged in the worship of the Shivalinga (Deity Shiva’s sacred symbol; Divine Phallus) on the banks of a lake. At the very moment, Deity Shiva Himself manifested and mitigating Nandi’s death made him His follower. – Gurudev Dr. Kateswamiji

2. Nandi performed rigorous austerities at the age of eight or nine years and acquired proximity to Deity Shiva. Deity Shiva accepted him as His son and chose him as the chief of His gana. Later, he was married to Suyasha, the daughter of a Marut. Shaivites consider that spiritually Nandi is a symbol of the Anand tattva (Principle). When Deity Shiva performs the tanḍav dance, Nandi stands by to keep the rhythm. In South Bharat, generally the Idol of Nandi is present to the left or right side of the main entrance of Deity Shiva’s temple.

They are short, stocky and have a reddish complexion. They have two tusks. They have four arms, holding a noose, a serpent, a trident and a mahapatra (Vessel). Their duty is to transport the souls of expired devotees of Deity Shiva in the pushpak viman (Flying Chariot) to Kailash (Heavenly abode of Deity Shiva).

A. Unique attributes of Nandi

1. Sage Sayanacharya has derived the word Vrushabha from the root ‘vrush’, which means ‘one who showers’. The other meaning of the word is, ‘one with excessive reproductive strength.’ Hence, Nandi is believed to be the symbol of developed masculinity.

2. Just as Manu is the first exponent of Dharmashastras (A genre of Sanskrut Holy texts and refers to the shastra or the science pertaining to Hindu Dharma ) and Bruhaspati that of Arthashastra (Economics), Nandi is the founder of Kamashastra (Science underlying sexual desire).

B. Spiritual significance of Nandi’s Idol

1. The two fore legs of Nandi denote truth and penance. Two hind legs denote mercy and donation.
2. In a temple of Deity Shiva, Nandi stands on one leg, with the other three bent at the knees. This signifies that in Kaliyug , Dharma is only 1/4th in existence.

C. Comparison between some forms of Shiva and His retinue

Note 1 – Chief of Shivagaṇas; this is not the same as His vehicle Nandi.

All those who are able to bring purity into their lives go to Shivalok. The region where peace, purity and spiritual evolvement exist is Shivalok.

Penance increases the body heat. To bring it down, Shiva lives on the Kailas mountain, the place where ice
resembles a cluster of bananas.