1. Chanting the Name of the Kuladevata 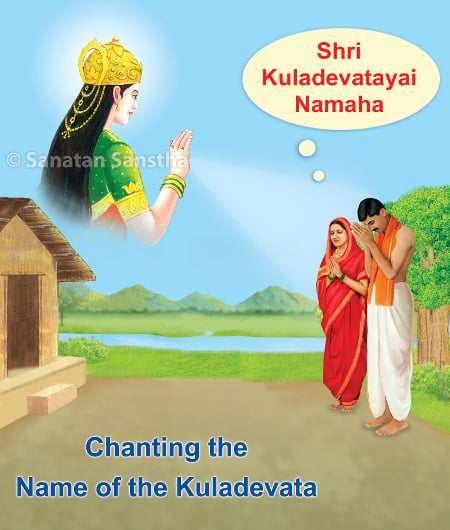 1. When suffering from a major illness, we do not treat ourself. We consult an authority in that field, meaning a physician, and then take medicines according to his advice. Similarly, to recover from the great illness of ‘being entangled in the vast ocean of worldly life’, that is, to progress spiritually, we need to practise Spirituality under the guidance of an evolved individual. However, there are very few of such spiritually evolved people in the society. Hence, the question remains about which Name should we chant. Here, God has provided us with an excellent solution. Each of us is born in a kula (Family) which is conducive to our spiritual progress.

2. When ill, we consult the family physician, since he is aware of our constitution and weaknesses. When somebody has to get some work done in an office quickly, he contacts an acquaintance working there. In the same way, of the thirty-three crore Deities, our Kuladevata is the closest to us; the one who will respond to our call and assist in our spiritual progress.

Similarly, chanting of the Name of the Kuladevata helps imbibe all the Principles in the universe and increase them by 30%. As against this, chanting the Names of Deities like Vishnu, Shiva, Ganapati, Lakshmi etc. only helps make up for the deficiency of that particular Principle. It is similar to taking energy-boosting vitamins A, B etc.

2. If we have both, Kuladev and Kuladevi, then chanting the Name of the Kuladevi is more suitable for the following reason. Children are more demanding of their mother than they are of the father because she gives in to their demands easily. Similarly, it is easier to appease the Kuladevi than the Kuladev !

4. If we are not aware of the Kuladevata, we should ask the elders in the family or people of the same surname, distant relatives, villagers, priests etc.

5. Which Name should a married woman chant – Kuladevata of her in-laws or of the parents ?

Usually a woman’s surname changes after marriage. A woman leaves her parental home and comes to live with her in-laws. In a way, this is considered to be her rebirth. Hence, after marriage a woman should chant the Name of the Kuladevata of the in-laws. However, if a woman has been chanting the Name of a specific Deity since her childhood and is a progressed seeker, she may continue to chant the same Name. This also holds good if before marriage she has been given a Name to chant by her Guru.

Once chanting of the Kuladevata’s Name reaches a certain level, the Guru Himself comes into the seeker’s life and blesses him with a Gurumantra.

It is important to chant the Name of Deity Dattatreya along with the ritual of shraddha.Deity Dattatreya is the Principle created from the combination of the Principles of the three main Deities, Brahma, Vishnu and Mahesh. One of His functions is to give momentum to the journey of our deceased ancestors (Pitars) to the next region. Hence, one should chant ‘Sri Gurudeva Datta’. In order to eliminate problems due to deceased ancestors we should chant ‘Shri Gurudev Datta’ for a minimum of 1 to 2 hours every day. If the intensity of the distress is medium in nature, chant for 2 to 4 hours and if the intensity is severe, then we should chant this Name for 4 to 6 hours.

B. In the discourses of Shri Gondavalekar Maharaj, chanting of Shriram’s Name is advocated. Saints of the Varkari sect advise chanting the mantra ‘Ram Krushna Hari’. Upon reading the ‘Ganapati Atharvashirsha’, we feel like chanting the Name of Ganapati. Thus, confusion ensues. The point to be noted is that in Spirituality the implied meaning is more important than the literal meaning. Hence, instead of taking the literal meaning of the above point, we should understand its implied meaning – ‘Chant God’s Name’.

D. Sectarian Spiritual practice emancipates only the mind and not the embodied soul.

Unlike the bygone days, nowadays since rites like shraddha, paksha, etc. for departed souls are not performed by most people nearly 30% of people are troubled by ancestors’ unsatisfied souls. That is why there are obstacles both in worldly life as well as in one’s spiritual practice. Since an average person can never know whether he is included in those 30% or whether he will be troubled by ancestors in the future, one should chant three malas (rosaries) of ‘Shri Gurudev Datta’ daily. One should increase the chanting to six to nine malas if the trouble is severe.

Kundalini
Dormant spiritual energy in the subtle-body. It is coiled like a serpent and consists of one central channel and two channels on its sides
Shraddha
Ritual performed on the death anniversary according to Hindu Almanac, to appease departed ancestors? subtle bodies
mantra
A syllable or words representing spiritual reality or an aspect of God uttered to protect oneself or to achieve a specific goal