So long as the mind is active, its dissolution does not take place. Whatever be the attempts, such as removal of personality defects and ego, awakening of bhav (Spiritual emotion), etc. to make the mind thoughtless, it remains active. Similarly, even if the Name of a particular Deity is chanted continuously, the mind remains active and the memories of God, bhav, etc. come to mind. Conversely, if we chant ‘Nirvichar’ or ‘Shri Nirvicharaya Namaha’, the mind does not remember anything else. This is because according to one spiritual rule ‘Word, touch, form, taste, fragrance and their energies co-exist’, the mind becomes one with the word ‘Nirvichar’ and thoughtless; meaning, first dissolution of the mind, dissolution of the intellect, dissolution of the subconscious mind and finally dissolution of the ego take place. As a result, it helps attain the nirgun (Non-materialised) state early.

1 A. Conduct the following experiment

1. Look at any object and experience what it feels like while chanting ‘Nirvichar’ or ‘Shri Nirvicharaya Namaha’. We will feel that looking at something pleasant does not make us happy, nor does the unpleasant make us sad.

2. If seekers find the word ‘Nirvichar’ or chanting ‘Nirvichar’ difficult, they should chant ‘Shri Nirvicharaya Namaha’ more every day for a few months and tell us what you feel; write to [email protected] or send it to Mrs. Bhagyashree Sawant, Sanatan Ashram, 24 / B Ramnathi, Bandora, Ponda, Goa. 403 401.

If this chant starts smoothly over time, it should be continued. The chanting of ‘Nirvichar’ or ‘Shri Nirvicharaya Namaha’ is the last chant in the spiritual practice as per Gurukrupayoga (Path of Guru’s grace).

2. For those who have distress caused by negative energies

3. Seekers on the Path of devotion or Path of knowledge

There can be devotion in the chants of Deities; whereas in Jnanayoga, the mind becoming thoughtless has its benefits of this state because in Spirituality, one has to go finally to nirgun, state of thoughtlessness. Even those on the Path of devotion want to go from sagun (Materialised) devotion to nirgun devotion in the end. Therefore, whether a seeker is on the Path of devotion, or the Path of knowledge or one who performs spiritual practice by any other Path, everyone will benefit by chanting ‘Nirvichar’.

4. It is not necessary to have bhav while chanting ‘Nirvichar’

So far, seekers were trying to overcome improper thoughts through the PDR process but this takes many years. If there are more personality defects, it may take several births to remove them. Supplementing the chant ‘Nirvichar’ with this method along with trying to remove one defect at a time will reduce many defects at the same time. Therefore, progress will be faster. Now, the next period in Kaliyug is very short for performing spiritual practice. This reminds me of a Hindi idiom – ‘If you master one aspect, the rest will be accomplished. If you try to master all aspects, nothing will be achieved’.

There is no need for a separate mudra for this chant; but if one wants to, make a mudra which is convenient.

7. While chanting ‘Nirvichar’ or
‘Shri Nirvicharaya Namaha’, seekers should remember the following aspects

1. So far, seekers were meditating or chanting between 9.30 to 10 in the morning or night. This need not be done.

2. Chanting ‘Shri Durgadevya Namaha (3 times) – ‘Shri Gurudev Datta – Shri Durgadevya Namaha (3 times) – Om Namaha Shivaya should be done 108 times daily sitting in one place to enhance immunity against coronavirus and obtain spiritual strength. If there are symptoms of coronavirus, ask the responsible seekers and chant what they suggest more for more time as required.

3.If a seeker is chanting the Name of the Kuladevata (Family Deity), he may continue if he wishes to; however if he wants to go to the chant of the next stage, then he should chant ‘Nirvichar’ or ‘Shri Nirvicharaya Namaha’.

4. Saints and seekers chanting for samashti : Some Saints chant for samashti (Society) for a few hours, and some seekers who are a spiritual level above 60% chant to remove the obstacles of negative energies in the propagation of Dharma to establish the ‘Hindu Rashtra’.

They should also chant ‘Nirvichar’ or ‘Shri Nirvicharaya Namaha’ after the necessary prayers.

8. Why is the word ‘Nirvichar’ a chant for seekers of all stages ?

To progress in Spirituality, one has to complete various stages in spiritual practice. For example, removal of personality defects, elimination of ego, chanting, attending satsangs, performing satseva, working to awaken spiritual emotion, sacrificing and developing Priti (Spiritual love without expectations). It may take 10-15 years for a seeker to complete the stage of chanting externally and reach the state of chanting from within. The seeker can progress only 4-5% spiritually in 4-5 years. Then, he would reach the stage of ‘satsang’. If he moves at this rate in spiritual practice, he will not reach his goal in one birth. If the seeker continues to make some efforts of the next stage of spiritual practice, the progress of the seeker will increase; for example, if efforts at the stage of ‘satsang’ are made while chanting, it will increase the rate of spiritual progress. Likewise, in Gurukrupayoga, the seeker of the primary stage is advised to make efforts of all eight stages (as mentioned earlier).
Therefore, progress in this path of spiritual practice is faster than other paths. So is the case with the chant of ‘Nirvichar’. For this chanting to take place, the spiritual level of the seeker should be at least 60%, which means, the starting of the dissolution of his mind. The seeker can then reach the state of ‘Nirvichar (Thoughtlessness)’; however, if he starts chanting ‘Nirvichar’ from the very beginning, he can reach this stage in a shorter time than what is required to reach the stage of dissolution of the mind by inculcating the sanskar of this chant to some extent and practising the 8 stages of spiritual practice.

A. Which is the chant for a seeker
who is at a spiritual level less than 60% ?

The chant of ‘Nirvichar’ leads to the state of ‘Nirgun’. Therefore, it may be difficult for seekers who chant the Name of the Kuladevata or seekers who are a spiritual level less than 60%. However, they should try to chant ‘Nirvichar’ along with their usual chanting. If it becomes possible to chant this voluntarily, it should be continued. Because in the end, you have to reach the next stage of spiritual practice and chant this word (‘Nirvichar’) all the time.
– Paratpar Guru (Dr.) Athavale

Some seekers may find it difficult to chant just ‘Nirvichar; they should try chanting ‘Om Nirvichar’. ‘Om’ has strength and energy. Therefore, adding ‘Om’ at the beginning of the chant ‘Nirvichar’ will help speed up the effect of the ‘Nirvichar’ chant. Those who are able to chant ‘Shri Nirvicharaya Namaha’ easily should continue with it.
– Paratpar Guru (Dr.) Athavale

Individual spiritual experiences of seekers published here are according to the Principle – ‘Where there is bhav (Spiritual emotion), there is God’. It is not that every individual will have similar experiences.

For listening a collection of sattvik stotra, Arti, Shloka and chantings download the ‘Sanatan Chaitanyavani App’ on the following link of ‘Google Play Store’. https://www.sanatan.org/Chaitanyavani 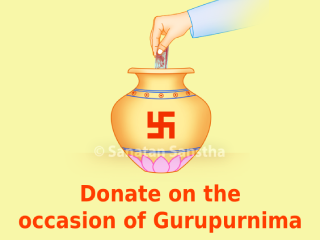