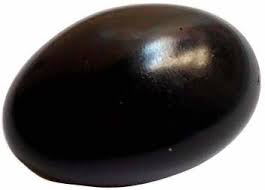 Shaligram is a sacred stone, a symbol of Shri Vishṇu. Situated 300 miles from Pashupatinath in Nepal is a place called Muktanath. Shaligrams are found there in River Ganḍaki. Besides, there is also amount a in of these stones. Idols are sculpted from these stones. It is also customary to carve yantras on these. The genuineness of these stones is tested based on certain types of chakras and openings on them. Sometimes, a stone may have a fine gold line on it. A genuine Shaligram is always heavier than a common stone, because it is non-porous like marble. As a result, it erodes less.

The colour of a Shaligram varies. Its name is derived from its colour – 1. Shubhra (White) – Vasudev, 2. Blue – Hiraṇyagarbha, 3. Black – Shri Vishṇu, 4. Red – Pradyumna, 5. Dark green – Shri Narayaṇ and 6. Dark blue – Nrusimha or Vaman. A Shaligram with twelve circles on it is called Ananta.

Eighty-nine such varieties of a Shaligram are known as of now. Shaligram is kept either in milk or rice. Thereafter, if it increases in form and weight then it is considered suitable for regular ritualistic worship. In some temples of Shri Vishṇu in South Bharat, a necklace of Shaligram adorns the neck of the Idol. Infact, the Vaishnav sect of the Madhava sect consider the Shaligram to be superior to even the Idol of Shri Vishṇu. In the Panchayatan (A group of five Deities) puja, Shaligram represents Shri Vishṇu. Followers of the Madhava sect partake of the tirtha (Holy water) offered to Shaligram instead of panchagavya (A mixture of cow’ s milk, curd, ghee, cow’s urine and cow dung) as atonement. 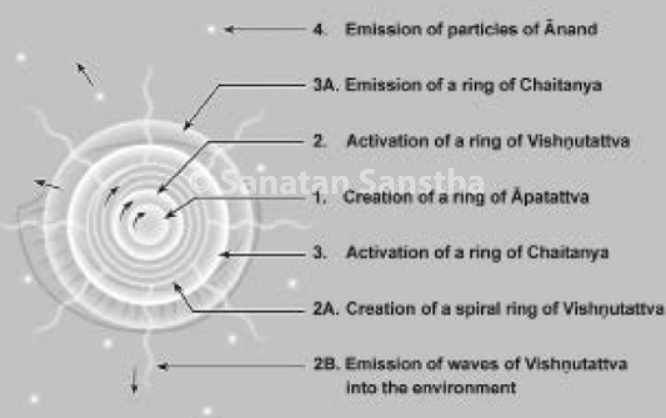 The Shaligram was created by Shri Vishnu. It contains a very high proportion of positive energy, which is why Vishnutattva is constantly attracted to it. Therefore, to protect ourselves, for good health & progress the Shaligram is worshipped ritualistically.

When Shri Vishnu hurled the Sudarshan-chakra towards the demons to destroy them, it went over the Shaligram into the sea and the design appeared on the Shaligram.

Since Shaligram contains Apatattva (Absolute Water Principle), the individual feels less thirsty if he keeps the Shaligram with him. This could be use full for mankind during the adverse times.