Information on ten main Incarnations of Shri Vishnu is given ahead. 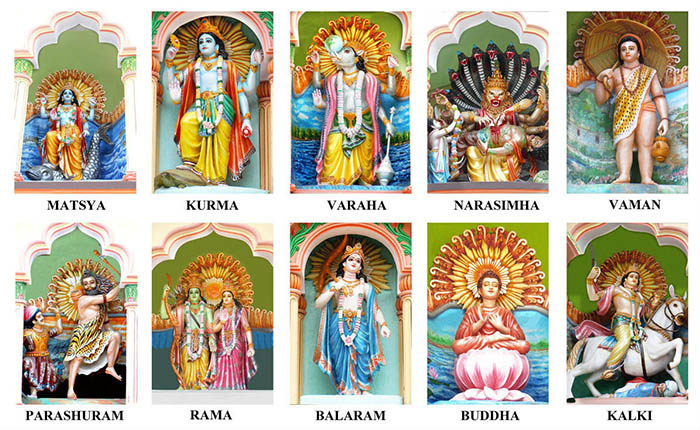 Note 1 – At the end of the Kaliyug(Era of strife) on the day of Shravan Shukla 3, the Incarnation of Kalki will be born. (Kalkipurana).

Just as a fish swims against the stream of a river, against the flow towards its origin, so also a seeker should go to his place of origin, that is, to Supreme God.

Idols of Nrusinha and Varaha are found all over Bharat in abundance; however, Idols of the Kurma Incarnation are rarely found independently.

Just as a tortoise withdraws its four limbs, head and tail into its shell, so must we control our shadripus(The six foes).

According to Vaikhanas-agam (Vaikhanas standsfor followers of Sage Vaikhanas and agam means tradition), Idols are of the types mentioned ahead.

The body is of a man and the head of a ferocious lion.

C. Implied meaning of some incidents

It is difficult to tolerate the Tej(Radiance) of Nrusimha. Hence, He is worshipped by adorning the back of His Idol with eyes, whiskers etc. Similarly, the eyes of Balaji of Tirupatiare half open since it is difficult to tolerate His Tej. Sacrifice of a goat is offered to Nrusimha. (While sacrificing an animal for the completion of a specific task, if the animal walks willingly towards the Deity of sacrifice, it not only ensures the completion of the task, but the animal also gets liberated. This is the noble intention underlying animal sacrifice.)

Nar was created from the human part of Narsinha, and Narayan from the face of a lion.

Vaman is the son of Kashyap and Aditi.His other Name is Urukram. Urukram means one who has a wide stride.

He kept Bali, a demon king, in bondage.

One comes across stories about Parashuramin the Ramayan, the Mahabharat and in some Puranas. There is no separate Purana about Parashuram unlike the Incarnations preceding Him.

Sage Jamadagni (of the Bhrugu dynasty) and Renuka were the parents of Parashuram. Renuka is also known as Ekvira in Maharashtra and Yallama in Karnataka. Renuka was the daughter of a Kshatriya (Warrior). However, Jamadagni being a Brahman, Parashuram too became a Brahman. The Ashram ofSage Jamadagni was situated on the banks of River Narmada.Parashuram was born there in the nineteenth Tretayug (in the transition period between the Treta and Dwaparyug according to the Mahabharat). Renu means particles of earth. Renuka performed the spiritual practice of the water element, meaning,she was a water-seeker. Hence, she could fetch water in  of wet clay. Jamadagni performed the spiritual practice of the fire element. Jamat is a type of fire. Jamat also means are solute wish.

The body is huge like that of Bhima. It has matted hair locks and sports a bow on the shoulder and an axe in the hand.

Since Parashuram is an Incarnation of Shri Vishnu, He is an Upasyadevata (Deity of worship). His birthday, which comes on Vaishakha Shukla 3, is celebrated as avrat (Vowed religious observance) as well as a religious festival.

The name ‘Ram’ was prevalent even before Ram’s birth.He belongs to the Sun dynasty.After His victory at Lanka, when Ram returned with Sita to Ayodhya, He began to be addressed as Shriram. ‘Shri’ is an adjective for God. Upon Ram demonstrating His Godhood, everyone started addressing Him as Shriram.He observed all the codes of Righteousness; that is why he is referred to as ‘Maryada Purushottam’.Shriram was ideal in all respects – ideal brother, ideal husband, ideal friend, ideal king and ideal enemy.

The control of shrout-smart karmas such as Yadnya went into the hands of the demons. Since they did not have the right to perform these things, there was anarchy everywhere. At that time, Bhagawan Buddha incarnated, had discussions with the demons, enticed them and diverted them from performing a Yadnya.

Bhagawan Buddha, the 9th Incarnation of Shri Vishnu, and the founder of Buddha sect Gautam Buddha are different.The reasons are mentioned ahead.

He is the tenth or twenty-first Incarnation of Shri Vishnu. He will be born on Shravan Shukla 3at the end of the Kaliyug to a Brahman named Vishnuyashas in the Shambalvillage in Kikat. His gotra will be Parashar.

He will embark on the conquest of the earth on His horse named Devdatta. He will destroy the evil & unrighteous and reinstate Dharma (Righteousness). He will destroy His enemies, the evildoers who have become foreigners by conduct, and rule the world. The priest Yadnyavalkya will assist Him in this mission and finally at the age of twenty-five, He will renounce His body at the confluence of the Rivers Ganga and Yamuna. Thereafter, Krutayug (Satyayug)will commence. These are the predictions made in Kalkipurana.

The Hayshirshapancharatra and the Agnipurana describe the image of Kalki in two different ways – one with two arms and the other with four arms.Kalki wields a sword in one hand, is enraged, is seated on a horse, is mighty, is the destroyer of evildoers and has two arms.