‘Vaikunth chaturdashi is an invaluable opportunity granted to us to worship Shri Vishnu. Its significance is that on this day the doors of Vaikunth (The abode of Shri Vishnu) are open to all devotees!. A devotee who performs even little devotion on this day is assured a place in Vaikunth.’ 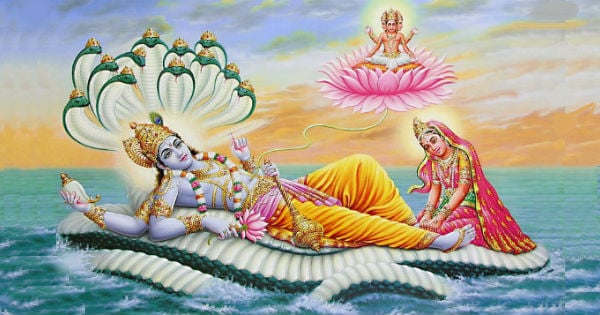 ‘Meditating upon Shri Vishnu and listening to His Divine stories eliminates our sins and also grants us a place in Vaikunth. There is a legend in the Purans in this regard. Once while wandering around the earth, Sage Narad (Sage of Deities) reached Vaikunth. When Shri Vishnu asked him the purpose of His visit He said, ‘O Master your Name endows grace. With Your grace, only Your beloved devotees can get rid of the cycle of birth and death. However, the common man is deprived of it. Please suggest a simple way by means of which even an ordinary devotee can perform your devotion and attain salvation.’

Upon this Shri Vishnu said, ‘O Narad, the doors of Vaikunth would be open to everyone who worships Me on Kartik shukla paksha chaturdashi (i.e. fourteenth day of the bright fortnight of Hindu calendar month of Kartik), with utmost devotion and faith. Thereafter Shri Vishnu summoned the doorkeepers Jai and Vijay and commanded them to keep the doors of Vaikunth open on that day. Bhagwan Vishnu further said, “If a devotee, on this day, worships Me with even little chanting, he will attain a place in Vaikunth. Any devotee living on the earth can ensure a place in Vaikunth by performing devotion unto Shri Vishnu ” This pleased Narad immensely and He felt immense gratitude unto Shri Vishnu for allowing an opportunity for ordinary soul to enter Vaikunth.’

2. A Description of Vaikunth

2A. Vaikunth is placed farther from the universe and at a level higher than
the three regions – bhu (Earth), bhuva (Nether region) and swarg (Heaven)

Mahadev, the Deity of Deities, resides in Kailas and Deity Brahma resides in Brahmalok. Similarly, Bhagwan Shrivishnu resides in Vaikunth, which is placed farther from the universe and at higher plane as compared to the three regions. It is impossible for ordinary souls like us to fathom the span of Vaikunth.

2B. Vaikunth imparts the highest form of Paramanand and Shanti

The nurturer of the universe, Bhagwan Vishnu, resides in Vaikunth, a subtle region which imparts Paramanand (Supreme Bliss) and Shanti (Peace). Vaikunth which houses Shri Vishnu is extremely Divine, lively and self-illumined. When performing spiritual practice on the earth we get to experience the highest form of Bliss, which is not equivalent to a fraction of the Supreme Bliss experienced in Vaikunth. In fact, this Supreme Bliss is something that cannot be imagined.

2C. The Vaikunth region as described in Shrimad bhagwad geeta

In Shrimad bhagwad geeta, God Himself has described His abode

2. ‘O Arjun my supreme abode is neither illuminated by the sun or moon, nor by fire and lightning. It is self-illumined. When humans attain place in this supreme abode, they do not take rebirth on the earth.’ – Shrimad bhagwad geeta, Chapter 15, Holy verse 6

2D. The abode of God is self-illumined by His own Brahmajyoti

In this Holy verse God Himself has described His supreme abode. We know that this material world, our earth, is lit by the sun, moon, stars etc. However God Himself tells how His abode does not need sun, moon, fire or lightning and that it is illuminated by the Divine Brahmajyoti originating from Him.

2E. Vaikunth region established as per the era

Badrinath, Jagannath and Dwarkapuri are considered as Vaikunth region on the earth. Badrinath was created in the Satyayug by Narayan Himself, in the Tretayug Rameshwar was established by Bhagwan Shri Ram, in the Dwaparyug Dwarka was created by Yogeshwar Shri krushna and now in Kaliyug Jagannath Puri is referred to as Vaikunth.

2F. Vaikunth is also the seat of origin of Deity Brahma

At the time of the deluge Nature nature is non-existent. At that time,  Shri.Vishnu, in His infant form,  sleeps on the leaf of the Holy fig tree (Peepul) leaf in His infant form. Later, A lotus emerges from His navel which giving gives birth to Deity Brahma. It only Thereafter, fter this that Deity Brahma  creates the universe. So Thus, the origin of Deity  Brahma, the creator of the universe, is the great abode of Shri.Vishnu, Vaikunth. The lotus feet of Shri.Vishnu are is our ultimate seat of refuge.