This article provides details of forms of Shri Vishnu such as Vitthal and Vyankatesha and also explains characteristics of various members of His family. 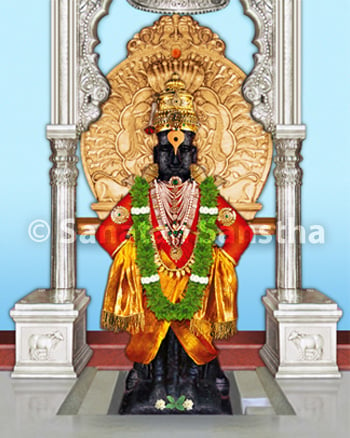 Pandurang is a Name of the fair-complexioned Shiva. In Kannada, this becomes Pandarange. Hence, Dr. Bhandarkar opines that the abode of Pandurang or Pandarange is Pandharpur.Many people wonder how He is named Pandurang (White)despite His Idol being dark-complexioned. Besides the point mentioned above, the answer is that to a true devotee His Idol appears white through the subtle-vision.Of the two Ekadashis in every Hindu lunar month, Vitthal is worshipped on the first Ekadashi and Pandurang on the second Ekadashi.

Rai and Rukmini are Vitthal’s consorts. Consorts of Deities are their Shaktis (Divine Energy). These are of two types – tarak (Saviour) and marak (Destroyer). From among Creation, Sustenance and Dissolution, Vitthal is the Deity of Sustenance; hence, both His Shaktis (Consorts) are associated with Creation and Sustenance.

D. Science of the Idol

Vitthal’s Idol is dark-complexioned,has protruding eyes and stands on a brick with the hands held at the waist. When Pundalik served his parents, Deity Vitthal was pleased and appeared before him. At that time, to avoid any slip in service of his parents, Pundalik threw a brick towards Vitthal and asked Him to stand on it. The Deity stood watching His devotee’s service with admiration. This Idol is different from the Idols of other Deities which wield either a weapon or bless with one hand. It depicts Vitthal, who sees everything with the stance of a spectator.Sense organs are above the waist and motor organs below the waist. Hands on the waist mean One who has control over His motor organs.

Vyankatesha has several Names – Vyankoba, Venkatraman, Venkatadhvari, Venkatadri, Shrinivas,Balaji, etc. Another Name is Tirupati. ‘Tiru’ means ‘Shri’, and hence,Tirupati means Shripati Vishnu. Since the radiance of Balaji of Tirupati cannot be easily tolerated, His eyes are half-closed.Shri Lakshmi is not beside Vyankatesha. Her temple is situated below the mountain in the Tiruchanur village. Here, She is called Padmavati or Almelumang. Padmavati is called Padubai by the shepherds.

He was born in space before the other Deities. Heis the son of Deity Brahma.

He is the son of Kashyap and Pracha. Some of His characteristics are given ahead.

The Garuda (Eagle) has acquired great importance in the Vaishnav sect. It is considered a major Deity in the Vaishnav family. Just as Nandi (The bull) is present in front of Shiva, Garuda is present in front of Shri Vishnu. In many temples of Shri Vishnu, a special pillar is erected which is called ‘Garuda’ pillar. This Idol of Garuda in front of Shri Vishnu is usually made of black stone; it is rarely made of wood. The Idol has a human form but a beak and wings of a bird. It stands in a posture with the hands folded in obeisance. When Garuda has four arms, it is called Vainateya.

The worship of Garuda has been going on since the ancient times. Garudagayatri has been described in the Mahanarayanopanishad (3.15) as –

Meaning : We are familiar with the Absolute Being in the form of an eagle. We meditate on that golden-winged Garuda. May he inspire our intellect benevolently.

C. Twelve names of Garuda and the benefits obtained by their daily recitation

In the Holy text Bruhadtantrasar, 12 Names of Garuda are prevalent. These are – 1. Suparna (With beautiful wings), 2.Vainateya (Son of Vinata), 3.Nagari (Enemy of snakes),4.Nagabhishan (One who is ruthless on snakes), 5.Jitantak (Onewho has won over time), 6.Vishari (Enemy of poison), 7.Ajit(One who never loses), 8.Vishwarupi (That which pervades the universe), 9. Gurutman (Extremely brave), 10.Khagashreshtha(Supreme among the birds), 11.Taksharya (Garuda) and 12.Kashyapnandan (Son of MaharshiKashyap).

Whoever gets up early and recites these 12 names everyday while bathing or going to bed, benefits in ways mentioned ahead.

Once these two had a quarrel over dividing the southern portion. At that time, Jay cursed Vijay saying, “You will become a crocodile”. Vijay retaliated and cursed Jay, “You will become an elephant”. Later, both repented for what they had done and surrendered to Shri Vishnu, who promised them that He would uplift them after they had undergone the curses. Under the influence of the curses, they were born on the banks of the River Gandki, one as a crocodile and the other as an elephant. Once, in the Hindu lunar month of Kartik, when the elephant entered the river to bathe, the crocodile held its leg. The elephant then fervently prayed to Shri Vishnu for deliverance. Shri Vishnu manifested,released both of them from the bondages of the curses and took them to Vishnulok (Abode of Shri Vishnu).

Once, when Sage Sanak was visiting Shri Vishnu along with other Sages, Jay and Vijay stopped them. As a result, the Sages cursed them – ‘You two will be born as demons’. When they pleaded for mitigation of the curse, the Sages replied, ‘After three births you will be liberated and return to Vaikuntha’. To undergo this curse,Jay and Vijay were born as Hiranyaksha and Hiranyakashyapu, Ravan and Kumbhakarna, Shishupal and Vakradanta. Each time they were slain by one of Shri Vishnu’s Incarnations, and finally after three births, they returned to Vaikuntha.

Like Yama,the Deity of death, Shri Vishnu too has messengers. They protect the devotees of Shri Vishnu, and after their death, take them to Vishnulok. These messengers always reside in Vaikuntha. They too hold a conch, a chakra and a mace like Shri Vishnu does. The fourth hand holds a baton. A necklace of tulsi leaves adorns their neck. Even Deity Yama respects them.

It is a sacred stone, a symbol of Shri Vishnu. Situated 300 miles from Pashupatinathin Nepal is a place called Muktanath.Shaligrams are found there in River Gandaki. Besides, there is also a mountain of these stones. Idols are sculpted from these stones. It is also customary to carve yantras on these. The genuineness of these stones is tested based on certain types of chakras and openings on them. Sometimes, a stone may have a fine gold line on it. A genuine Shaligram is always heavier than a common stone, because it is non-porous like marble. As a result, it erodes less.

The colour of a Shaligram varies. Its name is derived from its colour – 1. Shubhra (White) – Vasudev, 2. Blue – Hiranyagarbha,3. Black – Shri Vishnu, 4. Red – Pradyumna, 5. Dark green – Shri Narayan and 6.Dark blue – Nrusimha or Vaman. A Shaligram with twelve circles on it is called Ananta.

Eighty-nine such varieties of a Shaligram are known as of now. Shaligram is kept either in milk or rice. Thereafter, if it increases in form and weight then it is considered suitable for regular ritualistic worship. In some temples of Shri Vishnu in South Bharat, a necklace of Shaligram adorns the neck of the Idol.