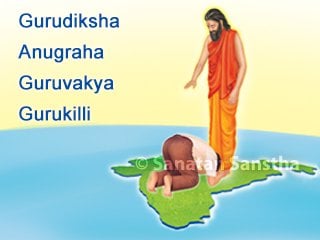 This article explains various ways in which a Guru imparts vision ( Guru Diksha ) and advises spiritual practice to His disciple. The disciple obtains blessing from the Guru after attaining complete knowledge for its fulfilment.

1. Guru diksha and its types

‘दीयते सम्यक् ईक्षणं यस्यां सा ।’ means that which imparts a true vision is known as Guru diksha. In short, Guru diksha is the spiritual practice advised by Him and at that time, usually a Gurumantra is recommended by the Guru. Types of Guru diksha are :

1 A. Shabdadiksha (Initiation through words)

When energy gets projected with the Guru’s words and creates a bhav (Spiritual emotion) of ‘I am Brahman’ in the disciple, Shabdadiksha takes place. In this method, at times the Guru summons the disciple and whispers a mantra in his ears.

1 B. Sparshadiksha (Initiation by touch)

Here, the touch can be in any form. Sometimes, the Guru touches with His hands, sometimes He squeezes the space between the eyebrows (the site of the adnya-chakra) with His fingers; or He may fling some object at the disciple. Once when Swami Vivekanand’s Guru, Ramakrushna Paramhansa, touched him with His foot, Vivekanand cried out aloud, ‘I am dying, I am dying’; and lost awareness of his body completely. Then, Ramakrushna Paramhansa brought him back to the normal state.

1 C. Darshandiksha by the Guru

This initiation is obtained by looking at the Guru. When His Holiness Bhaktaraj Maharaj met His Guru (Shri Anantanand Saish) the first time, He slipped into bhavavastha.

1 D. Drukdiksha (Initiation by a look)

In this type of initiation, the Guru imparts His inner energy to the disciple through His merciful gaze. This is also known as the Mayūrdiksha (Peacock initiation), since it is believed that a peacock impregnates its lover without any physical contact, simply by looking at it. The one bestowing this initiation Himself has to be introverted. An extroverted individual cannot impart such an initiation. Vision is of two types – the upper gaze or introverted vision and the lower gaze or extroverted vision. When we look at a photograph of Nityanandbaba or Saibaba, we see that their gaze is skywards.

When Bhagawan Raman Maharshi wished to bestow a devotee with initiation by vision, He would fix His gaze on him for some time. Consequently, desires and worldly turmoil in the devotee’s mind would disappear. Some devotees would feel the flow of electric current in the body, while others would experience radiant peace spreading in their bodies.

One devotee has described Bhagawan’s look as follows : “Bhagawan suddenly turned His radiant eyes towards me. Earlier, I was unable to stare at His eyes for a long period. But this time, I am unable to say for how long I continued to stare at His extremely powerful and radiant eyes. During this time, with the current of His vision I could hear the vibrations that were created in my body”.

Initiation is done by asking the disciple to drink Holy water.

The disciple receives initiation after looking at or reading a letter written by the Guru.

This initiation is acquired by a disciple solely with the Guru’s resolve. This is also known as Anugraha or Krupadiksha.

In ‘अनु (पश्चात्) गृह्यमि इति ।’ means receiving from the Guru later. Thus, it is a blessing obtained from the Guru after attaining complete knowledge for its fulfilment. The Guru’s energy of initiation itself is known as Gurupad (Guru Principle). Initiation is the goal and is obtained through some medium; Shri Guru Himself is that medium.

‘अभीष्टसम्पादनेच्छारूपः प्रसादः ।’, meaning, obtaining the desired prasad (Blessings) for the desirable object (God) is itself an initiation (according to the Nyayakosha). The Guru is God and God is the Guru. The grace of God itself is an initiation. In all sects, great importance is attached to the grace of God which appears in the form of an initiation. In the Shrimadbhagawadgita, Shrikrushṇa has explained the importance of initiation in the following words – ‘मत्प्रसादादवाप्नोति शाश्वतं पदमव्ययम् ।’ (Adhyaya 18, Shloka 56); meaning, my devotee acquires the eternal, imperishable abode with my grace (Initiation). All sects that follow the Bhaktimarg (Path of Devotion) believe that by intense devotion one can acquire God’s grace, that is, His initiation, and can attain ultimate emancipation.

According to Shri Vallabhacharya, Pushtimarg (Path of Evolution) is synonymous with Bhaktimarg. He has referred to evolution as initiation.

If the disciple has faith, the group of words that bestow self-realisation without the necessity of the intellect are known as ‘Guruvakya’.

The key which opens all the doors, even that of time, is known as the Gurukilli.