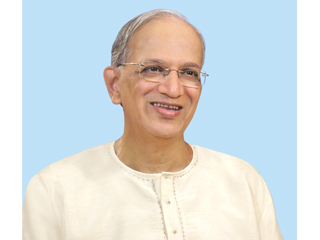 Sant Tukaram Maharaj says ‘ज्ञानियांचा राजा गुरु महाराव’ meaning, the Guru is actually a treasure of Knowledge itself. When I was with my Guru Saint Bhaktaraj Maharaj, I obtained Knowledge by asking Him many questions related to Spirituality repeatedly. Later, even after the Guru renounced His body, I continue to obtain Knowledge through various mediums by His grace. The main reason for this is – the Guru advised me to keep my virtue of ‘curiosity’ awakened. The main aspect to be realised in this regard is that the Guru did not expect me to have curiosity about the subjects in Maya (The Great Illusion), but in Spirituality, and He ensured that I follow it.

A. The origin of writing Holy texts

Saint Bhaktaraj Maharaj said, ‘Only the curious is worthy of knowledge’. It is because of curiosity, that I used to ask Him a lot of questions. I started comprehending many subjects related to Spirituality because of His answers. Later, when I started experiencing Anandavastha (Blissful state) during my spiritual practice, one day I said to Him, “Henceforth, I will not ask you any question”. He scolded me for saying so. Due to the scolding, my curiosity has been preserved so far. Now, two questions come to my mind regarding every event – ‘Why and how’. And, my Guru has also made arrangement to ensure that I get answers to these questions. So far, seekers of Sanatan who receive knowledge from the subtle world are promptly getting answers to all my questions through the subtle dimension. These seekers give answers to 7-8 questions I ask them daily. Through the medium of these seekers, in-depth spiritual Knowledge on various subjects is received daily which was unheard of in the past.

Even though it is true that the Guru scolded me for not asking questions anymore, sometimes He also used to scold me for asking Him inappropriate questions. He used to say, “What non-sensical questions are you asking me ? Increase your spiritual practice so that you get answers to all your questions from within”. Every word spoken by the Guru is like teaching something to His disciple. By scolding me like this, the Guru was helping in the dissolution of my mind. However, as per spiritual practice according to Gurukrupayoga, ‘samashti sadhana’ has more importance, and this Knowledge needs to be imparted to the society. For this reason, my Guru has still kept my curiosity awakened so far, because of which I am asking the seekers who receive Knowledge from the subtle dimension questions on various topics.

B. Uniqueness of Holy texts

In the texts and journals of other authors, Vedas, Upanishads, Puranas, etc. are related to the theoretical information incidental to the concerned subject; for example, the significance of chanting, reducing ego, etc. On the other hand, due to my curiosity, Sanatan’s Holy texts detail practical information such as ‘How chanting can be done consistently and in a bhav-enriched manner, and how to overcome the ego’.

It is because of my curiosity, that I get answers from the seekers who receive Knowledge. As a result, in the past 15-20 years, 7.45 million copies of 311 Sanatan’s Holy texts on various subjects such as Spirituality, Spiritual practice, Dharma, Nation etc. in 17 languages (11 Indian languages – Marathi, Hindi, Gujarati, Kannada, Tamil, Telugu, Malayalam, Bengali, Odia, Assamese, Gurumukhi and 6 foreign languages – English, Serbian, German, Spanish, French and Nepali) have been published.

In addition, matter enough to publish over 8,000 Holy texts on more than 11,000 subjects is ready and more matter is being added to it daily.

2. Hypnotherapy for psychiatric patients invented out of curiosity

When I became a doctor, I obtained information on the causes and remedies for physical illness. After studying psychology, I got acquainted with information about the mind. While treating, psychiatrists give preference to prescribing medicines to cure ailments of the patients such as worry, depression, etc. Due to these therapeutic methods, removal of personality defects and ego could not be achieved; as a result, the psychological disorders of patients remained uncured. Later, I invented methods in hypnotherapy to remove personality defects and ego. By using these methods, I could obtain brief introduction to the subconscious mind. As a result, I established the ‘Indian Society for Clinical Hypnosis and Research’ in 1982, and edited ‘The Indian Journal of Clinical Hypnosis and Research’ for 5 consecutive years, as well as published 6 texts on hypnosis and hypnotherapy.

3. Obtaining Knowledge on spiritual remedies due to curiosity

Later, when I started spiritual practice, due to my curiosity I learned that the causes of diseases are not restricted only to the physical and mental types, but these are also spiritual in nature. Therefore, I realised the importance of removing personality defects and ego. Once an individual becomes sattvik (Spiritually pure) due to the removal of personality defects and ego, most of his mental problems can be cured. I realised that if psychological disorders were still not cured, it would be because of spiritual reasons, such as obstacles in the Kundalini-chakras and distress caused by negative energies, and the only remedy on these is to perform spiritual practice. Therefore, I understood the importance of starting spiritual practice at the age of 44 and became a disciple of the Guru instead of becoming an expert as a hypnotherapist.

Later, as I continued to perform spiritual practice, I could study the types of negative energies, their effects on human life and environment, their reasons for causing distress to human beings and the symptoms of this distress. As a remedy on evil forces, I could invent methods of spiritual remedies to overcome the distress caused by negative energies; for example, chanting two Names (of God) alternatively, placing sattvik pictures or Name-strips of Deities at the locations of the Kundalini-chakra of the body. I could also invent various remedial measures useful for eliminating physical and mental ailments, as well as spiritual distress; for example, remedies of empty boxes, Pranashakti flow remedies. Holy texts on these remedies have also been published by Sanatan. All this was possible only because of my curiosity.

4. Obtaining Knowledge on various subjects out of curiosity

B. Due to curiosity, I am also obtaining Knowledge on various subjects such as painting, sculpture, music, dancing, architecture, planting medicinal herbs, etc. along with various topics in Spirituality such as Jnanyoga (Path of Knowledge), Bhaktiyoga (Path of Devotion), Karmayoga (Path of Action), etc.

In the pictures of Deities made by Sanatan’s seeker-artists under my guidance, the Principle of concerned Deities has been imbibed from 28 to 31.7%; whereas, in the Idol of Shri Ganesh it is 28.3%. (In Kaliyug [The present era of strife]), the Principle of a Deity in its picture or Idol can be as much as 30%.)

5. Only due to the Knowledge obtained
out of curiosity, it was possible to present research
papers in National and International Conferences after
conducting research on various subjects using scientific methodology

It is becoming possible to present research papers in National and International Conferences after conducting research on more than 1,000 various subjects such as positive effects of chanting, Yajna, diet, hairstyle, Shraddha etc. in Hindu Dharma on individuals and environment. This research is conducted using scientific equipment and techniques such as the ‘UTS’ (Universal Thermo Scanner), ‘PIP (Polycontrast Interference Photography)’, ‘Thermal Imaging’, etc. From October 2016 to November 2018, such research papers have been presented in 8 National and 29 International Scientific Conferences. This has become possible only due to my curiosity.

The modern scientists and rationalists consider aspects to be true only when these are proved by scientific testing, meaning, some equipment. In the present age, only Knowledge that has been proved with the help of modern scientific know-how is considered credible over the Knowledge provided by some individual or Sage and Ascetic; as a result, the possibility of the present generation turning towards of Spirituality and spiritual practice have increased.

6. It becomes possible to study and
conduct research on concepts that are beyond
imagination and comprehension of the intellect due to curiosity

B.Sanatan’s Ramnathi Ashram (at Ponda, Goa) and many objects in the Ashram have undergone distressing changes due to the attacks of negative energies and undergone Divine changes due to positive energies. These changes are at the level of Panchamahabhuta (The five Cosmic Principles – Pruthvi, Apa, Tej, Vayu and Akash).

Some examples of distressing changes are given ahead

Some examples of distressing energy manifestation are – foul smell emanating from objects, dislike for its colour, loathing its touch, hearing distressing sounds. Some examples of Divine changes manifestation are – fragrance emanating from objects, pleasing change in their colour, feeling good upon touching them, hearing Divine sounds without any external source, reflection from the floor tiles. These and so many other objects such as more than 15,000 objects and photographs along with recording that will be enough to prepare over 27,000 DVDs have been collected so far.

Efforts are being made to find out subtle cause-effect relationship underlying the abovementioned phenomenon by conducting research. This is becoming possible only because of curiosity in me. All this has opened a new field for scholars and researchers in the spiritual world.

7. Only because of curiosity, it became
possible to introduce the subtle dimension to mankind

From the information provided above, it may have been realised that ‘Spirituality’ is a science related to vyashti and samashti sadhana, meaning, in the context of God-realisation, and it is the most superior science. Every day, I experience a dictum of Sant Rahim – ‘Accomplish one thing and all others get accomplished’. In my case, accomplishing ‘one thing’ is the ‘grace of God’ and ‘all others get accomplished’ is being able to perform satsevas in various fields, meaning, without any knowledge of various subjects such as drawing, music, sculpture, spiritual research etc. I am able to guide seekers in these fields. I am blessed by God because of my spiritual practice, and He only suggests to me appropriately due to my curiosity. In this way, God is making sure that the ego of ‘I perform a lot of work. I should become famous’, will not develop in me. Hence, I am immensely grateful at the Holy feet of God.