On 1st June, it was declared during 8th All India Hindu Rashtra Convention that Dr. Shibnarayan Sen, the Editor of a fortnightly periodical called ‘Truth’ published by ‘Shaastra Dharma Prachar Sabha’, Kolkata (Bengal) and a scholar of Hindu Dharma has attained ‘Sainthood’; while it was declared that Smt. Ranu Bora (age- 71 yrs) of ‘SwamiVivekananda Kendra’, Tejpur (Assam) and Shri. Anirban Niyogi (age-53 yrs), General Secretary of ‘Salakia BharatiyaSadhak Samaj’, Howrah (Bengal) attained 61% spiritual level. Given here is the detailed news about the function.

Dr. Shibnarayan Sen, General Secretary of ‘Shaastra Dharma Prachar Sabha’ took care to see, when he was serving the Government, holding high post, that customs and traditions of Hindu Dharma were followed. We all have some idea of how difficult it is to abide by Sanatan Dharma in Kali Yuga. Despite being a scholar of ‘Dharmashastra’, he is very humble. He seems to be always in communion with God. He has now gone beyond words though he used to create awareness towards matters related to nation and Dharma through the medium of words; i.e. he has attained high spiritual level. One feels happy just to look at the books written by him. His ‘Kshatra-Teja’ can be seen when he talks especially against atheists. Dr. Shibnarayan Sen, who is a blend of ‘Brahma-Tej’ and ‘Kshatra-Tej’, is also a unique combination of devotion towards Guru and God. He is a devotee of God in true sense of the term. All participants could feel the divine energy when he spoke during the Convention. I feel special joy to declare that Dr. Shibnarayan Sen has attained 71% spiritual level and has become a Saint. I pray to Bhagavan Shrikrushna for his rapid further spiritual progress !’- (Paratpar Guru) Dr. Athavale

H.H. (Dr.) Shibnarayan Sen said while expressing his feelings on attaining Sainthood, “I am not eligible for this honour. When God gives His flag to someone for holding in his hand, He also gives strength to that person for waving that flag. I pray to him who has made me Saint to get work done from me even in future. It is necessary to know for people who are working for protection of Dharma that God’s power is beyond science. Truth is the biggest power in life. Truth is science and Truth is Dharma. Truth is Shiva and God certainly bestows His grace on those who do not let go of Truth. I want to be a slave of God; I want to worship Him. Today, Hindu Dharma is criticized by many people; therefore, we should commit ourselves for unification of Hindus. Activities of ‘Shaastra Dharma Prachar Sabha’ have been blessed by great Saints.”

Sadguru (Dr.) Charudatta Pingale said, “Pujya Dr. Shibnarayan Sen has been working ceaselessly for ‘Dharmashiksha’ and ‘Dharmajagruti’. He has written many books refuting charges leveled against Sanatan Dharma. These books are like guides. These books give strength to fight against anti-Dharma thoughts. A person, making available such information, has to really slog hard. H.H. (Dr.) Sen is a scholar; still he has qualities like love, respect and modesty; so he can easily mix up with everyone. It is difficult to undertake ‘sadhana’ on the path of knowledge along with devotion; but he has been working through both these media, in present situation. H.H. Dr. Shibnarayan Sen is a self-illuminated person. He has sacrificed his mind now i.e. he has attained ‘Manolaya’ and ‘Paratpar Guru’ Dr. Athavale has said so.

H.H. Nilesh Singbal said, “Bharat used to be ‘Vishwa-Guru’ on the strength of knowledge during ancient times. Later, such power of knowledge was destroyed by anti-Hindus. Hindus were kept away from ‘Dharmashastra’. It is very easy to destroy something but it is very difficult to re-create the same thing or re-establish that thing since it requires severe spiritual practice and loyalty towards principles. Erudite persons do such incomparable task of exposing the power of knowledge and that is what H.H. (Dr.) Sen has done. Living in an adverse place like Bengal and doing this work is great ‘sadhana’. H.H. (Dr.) Sen is always busy in writing books whenever we go to the office of ‘Shaastra Dharma Prachar Sabha’ at Kolkata. Still, he spares time for us. He always attends Sanatan’s ‘Guru-Pournima’ function held at Kataras (Jharkhand) and gives guidance.” 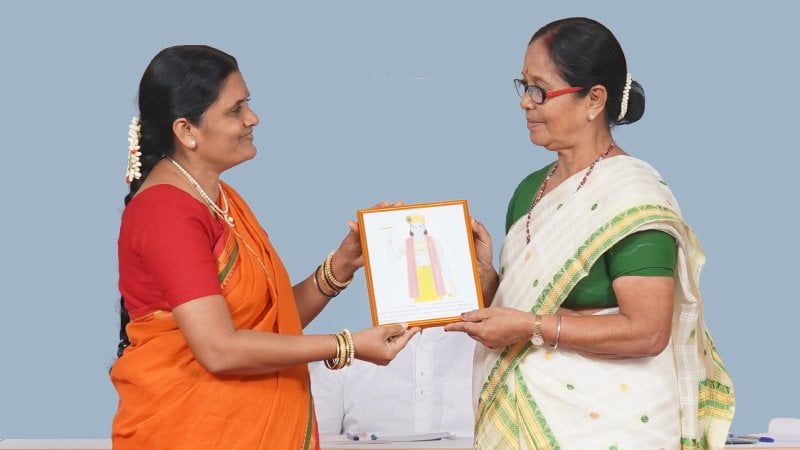 Smt. Ranu Bora (SwamiVivekananda Kendra, Tejpur, Assam) said after her felicitation, “I am not fit for such honour. I have not done anything. Earlier, I was quite reserved. I read literature of Swami Vivekananda when I got associated with Swami Vivekananda Kendra. Since then, valour has been created in me and I started feeling that I must do something for the nation and Dharma. In 9 districts of Assam, Muslim population is 80%. I am the only one working in Assam and when I say I am a Hindu, people laugh at me. We have to obtain permission from local administration if ‘puja’ is to be performed in public. Awareness needs to be created amongst local Hindus for bringing change in their pathetic condition.”

Spiritual practice should be increased for undertaking ‘Samashti seva’ ! 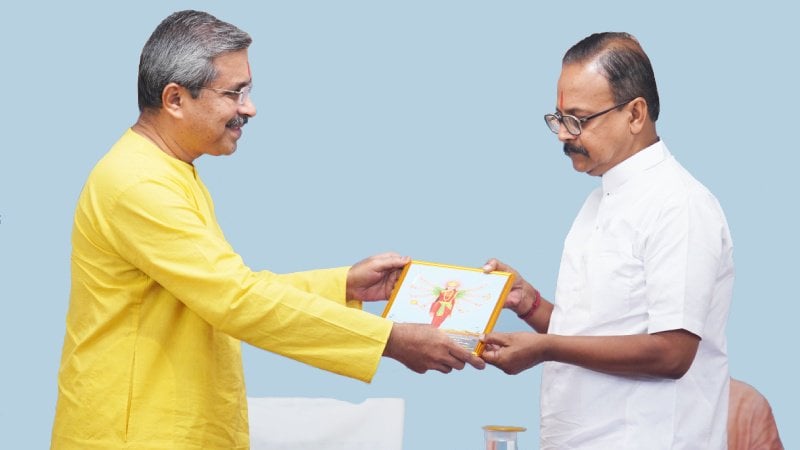 Shri. Anirban Niyogi (General Secretary, ‘Salakia Bharatiya Sadhak Samaj’, Howrah (Bengal)) said after his felicitation, “I never thought that I would attain 61% spiritual level. It has happened with God’s grace. Higher spiritual level helps in creating unshakeable faith in God; reducing doubts. We experience God as much as our mind is pure from within. We go close to Him. Only a person with pure mind can associate others with ‘sadhana’. ‘Sadhana’ has to be increased for ‘Samashti Seva’. God bestows His grace when we call Him with faith. We cannot do anything without spiritual strength. Obstacles faced in ‘Dharmakarya’ are removed only with God’s grace.”