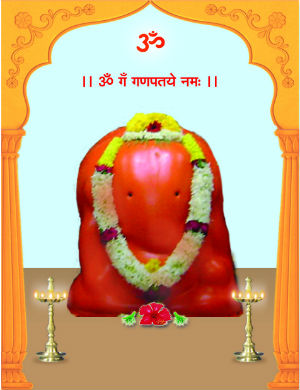 A very learned sage named Vachankavi lived in Vidarbha. His wife Mukunda was extremely beautiful. One day Rukmagandha, the king of Kundinpur, came to Vidarbha for hunting. During the afternoon, he went to the ashram of Vachankavi to quench his thirst. Maharshi was not in the ashram and Mukunda was alone. Allured by his beauty Mukunda expressed her erratic desire to him. The king did not accept it and left the ashram without drinking water. This enraged Mukunda and she cursed the king that he would be diseased with leprosy. The king got infected with the disease instantly yet not yielding to her desire, he left cursing his misfortune. (Later Maharshi Naradmuni cured him of the disease with water from the Chintamani pond.) Seeing Mukunda ridden with lust in the ashram and knowing that it was the auspicious moment for the birth of an extraordinary soul, King Indra planted his semen in her, the outcome of which was Sage Maharshi Grutsamad. Maharshi Vachankavi and Maharshi Grutsamad both were completely oblivious of all this. Later however in his youth Grutsamad visited Magadh. In Magadh he defeated all scholars in the court of the king with his intellectual prowess. Sage Atri, another sage from Vidarbha, could not tolerate the glory showered upon Grutsamad and shouted impulsively, ‘O son of Rukmagandha, you have no right to debate’. Grutsamad was hurt by these words of Sage Atri. He came home and questioned his mother about his birth. Ridden with fear Mukunda narrated everything to him. Angered with her, Grutsamad cursed her that in every birth she would become a kantaki tree and that no bird would inhabit that tree. Then as he was about to renounce his body there was a heavenly message ‘Do not give up your body Grutsamad. You are not a son of a Kshatriya (Warrior), you are the son of a Dev (Deity). You are the son of King Indra who had assumed the form of Rukmaganda. Your incarnation is not meant for such suicide. You should worship Shri Ganesh’. Thereafter Maharshi left Vidarbha choosing Theur in Pune District as his place of functioning and undertook penance. After performing austerities for 12 years, Bhagwan Ganesh manifested and gave Maharshi Grutsamad a number of blessings. It is at this very spot that Maharshi Grutsamad installed an Idol of Shri Ganesh. The Shri Ganesh Idol installed at Theur (Pune District) is also known as Chintamani. It is one of the famous places of pilgrimage from among the eight Vinayaks.

Discoveries made by Maharshi Grutsamad