1. A day in each fortnight of a calendar is
allotted by Scripture writers to a Deity based on solar
and lunar effects and that allotted to ‘Shri Ganesh’ is ‘chaturthi’ 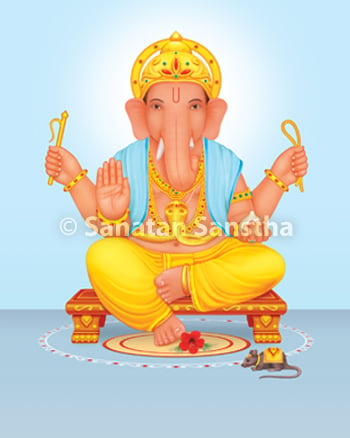 ‘Based on astrology and the Religious Scriptures the sun represents cosmic energy (pranshakti) and the moon, mental energy. Tithis (dates as per Hindu lunar calendar) are determined by the sun and moon. Their movement creates different angles. On amavasya (no moon day) the moon enters the sun house and on pournima (full moon day) they face each other at an angle of 180 degrees. On ashtami they remain midway. Based on the effects of the sun and moon Scripture writers have decided the Deity for every date of the fortnight.

So chaturthi (the fourth day of the fortnight) is allotted to ‘Shri Ganesh’ because He is the remover of obstacles. Shri Ganesh and Shri Saraswati are both Deities who endow intellect as described in Holy texts, yet the missions of both of them are different. Intellect and knowledge grow with the grace of Shri Ganesh and with worship of Shri Saraswati the knowledge so gained can be expressed verbally. That is why She is called ‘Vakvilasini’ (vak means word).

2. Different Incarnations of Shri Ganesh and Their missions

Till date Ganesh has been created and undergone dissolution several times. Every time Shri Ganesh has assumed an Incarnation to accomplish a particular mission. The biography of these Incarnations is different or appears different but it is the truth because all this has been described by Sage Vyas. If Ganesh is worshiped with faith then one receives the benefit even today.

tithis
Dates as per Hindu lunar Almanac
Vedas
The most sacred Hindu scriptures, revealed directly by God
Ashram
A place where a seeker can remain engrossed in spiritual practice through spiritual discipline
Amavasya
New moon day
mantra
A syllable or words representing spiritual reality or an aspect of God uttered to protect oneself or to achieve a specific goal