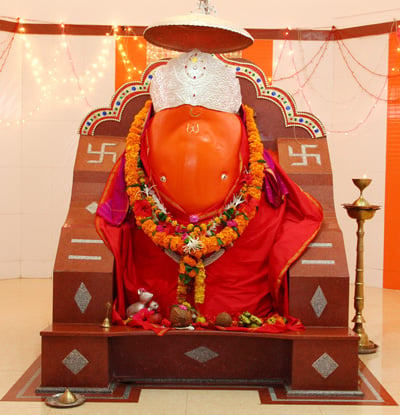 The attractive idol of Shri Ganesh in the form of Varad Vinayak installed by Sage Vasishtha at Kelzhar (Wardha District). Let us offer obeisance to Varad Vinayak the bestower of intellect, with a spiritual emotion of surrender !

At Kelzhar in Wardha District there is a famous temple of Varad Vinayak form of Ganapati. Kelzhar is 52 kilometers away from Nagpur and is a scenic place located on a hillock.

Both Vasishtha Puran and the Mahabharat mention importance of this temple. In both the holy texts, the name of Kelzhar village is referred to as ‘Ekchakra Nagar’. Sage Vasishtha lived in Kelzhar. It is stated that the Sage installed this idol to be able to perform devotion and ritualistic worship. A reference is also found about creation of River Wardha approximately around the same time. As stated in Vasishtha Puran, this Ganapati is named as ‘Varad Vinayak’ and the river as ‘Varda’. This timeperiod was before the birth of Prabhu Shri Ramachandra. After His birth, Sage Vasishtha left this place.

The ‘Varad Vinayak’ idol of Shri Ganesh at Kelzhar is 1.40 metres tall and 4.40 metres wide.This idol is extremely attractive and spiritually active too and devotees believe that He fulfils their vows. This temple is one of the eight temples of Ganesh in Vidarbha.

‘The Ganesh created by Deity Parvati is an incarnation of Mahaganapati. She made a clay form and invoked Ganapati into it. Prior to creation of universe as His Principle existed in a non-materialised form which manifests itself in diverse forms of illusion, the Principle is called as ‘Mahaganapati’. When Mahaganapati is worshipped for a specific supernaturnal power or purely for intention of attaining Moksha (Final Liberation), traditionally a Ganapati idol with a right sided trunk is used. But at such times as far as possible an earthen idol is used. Very rarely gold or silver idols of Ganapati with a righ sided trunk are found.’

‘Every male Deity has an associated Shakti (Energy), for example Brahma-Bharati, Shrivishnu-Shrilakshmi, Shiva-Parvati. It would not be surprising if devotees of Ganapati in form of Parabrahman (Supreme Soul) also believe in existence of His Shakti. There is a sculpture of Ganapati with His Energy seated on His lap, embracing Her. A picture print of this is available even today. A sculpture of Siddhi and Buddhi, His two consorts seated beside Him is available too. In the Science of Tantra this kind of Ganapati along with His Energies is called ‘Mahaganapati’.