Puja (Ritualistic worship) of Shri Vishnu has been prevalent since the Vedic period. The greatest Vaishnav is Shiva and the greatest Shaiva is Shri Vishnu; because, they worship each other.The Padmanabhaswamy Temple (in Thiruvananthapuram,Kerala) and Shri Vyankateshawar (Balaji) Temple (in TirumalaTirupati, Andhra Pradesh) are the main centres of Shri Vishnu’sworship.

To represent the 108(Narayan) waves emerging from God, the Vaishnav sect applies gandha (sandalwood paste) to their foreheads vertically. On the other hand,Shaivites apply bhasma (Holy ash) horizontally to represent the 360 waves revolving around the earth.

A. 9 to 5 dots (Straight lines) : Upon drawing a rangoli withstraight lines we get the spiritual experience of Shakti (Divine Energy). 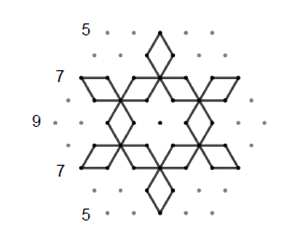 B. 9 to 5 dots (Curved lines) : Upon drawing a rangoli pattern with curved lines we get the spiritual experience of Anand (Bliss). 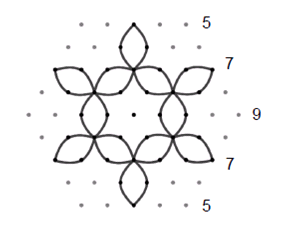 If rangoli is drawn with bhav (Spiritual emotion), the Principle also increases in proportion with the bhav. Fill the rangoli with sattvik colours such as yellow, pale blue, pink.

3. Worship according to the doctrines of the Vaishnav sect

Just like other Deities, Shri Vishnu is also worshipped with Shodashopachar puja. Tulsi(Basil) leaves are an essential part of Shri Vishnu’s worship. If lotus flowers are available, it is even better. Khir or shira is Shri Vishnu’s favourite Naivedya. The main ritualistic worship is performed throughout the year using a different Name every month. It should be performed on the Dwadashi. Keshav in the month of Margashirsha, Narayan in Pousha, Madhav in Magha, Govind in Phalgun, Shri Vishnu in Chaitra, Madhusudan in Vaishakha, Trivikram in Jyeshtha, Vamanin Ashadha, Shridhar in Shravan, Hrushikesha in Bhadrapad,Padmanabha in Ashwin and Damodar in Kartik should be the Names used during the worship. An Idol made of gold should bed raped in white cloth and installed on a kalash (Pot). Every substance in the worship should be offered while chanting the twelve letter mantra- Om NamoBhagawateVasudevaya. The flowers and fruits offered every month should be different. Since devotees have given a human form to Shri Vishnu to a great extent, as part of His worship the doors of a Shri Vishnu temple are kept closed with the reason that He is eating, sleeping, etc.

4. Why are tulsi leaves offered to ShriVishnu ?

Tulsi is a sacred plant. The plant grows to a height of 3-4 feet.Worship of Shri Vishnu without tulsi leaves goes in vain,because without offering tulsi leaves or without sprinkling the Naivedya with water using the tulsi leaves, Shri Vishnu does not partake of the offering. Looking at, touching, meditating upon, praying to, worshipping, planting or eating tulsi leaves can cleanse the demerits of many past births. It is said that all Deities reside inthis plant right from the roots to its shoots.

One objective of ritualistic worship is that the Idol being worshipped should get charged with Chaitanya (Divine consciousness)and this in turn should help us progress spiritually. To generate this Chaitanya, a substance that has greater ability to attract the pavitraks of that Deity from as far as the Maharlokis offered to the Idol. Red flowers have the ability to attract the pavitraks of Ganapati, bel leaves that of Shiva, tulsi leaves that of Shri Vishnu, etc. Hence, tulsi leaves are offered to Shri Vishnu.A tulsi is planted on a pedestal in front of the house and tulsi is even wedded to Shrikrushna.

Meaning : Shri Vishnu and Shiva are one and the same.The similarity with respect to ritualistic worship is as follows- The inherent characteristics of a commodity change with time.On Kartiki Ekadashi, tulsi leaves develop the ability to imbibe pavitraks of Shiva and bel leaves of Shri Vishnu. Hence, on this day Shiva is offered tulsi leaves & Shri Vishnu is offered bel leaves. The psychological explanation is – this is done to illustrate the non-duality between Hari (Shri Vishnu) and Har (Shankar).

B. An icon of vairagya (Detachment)

A tulsi plant symbolises detachment. Once, while performing the ritual of tula(Weighing with food grains, gems etc.) of Shrikrushna, despite putting diamonds, precious stones, gold etc. in one pan, the other pan with Shrikrushna seated in would just not balance. Finally,Rukmini placed a tulsi leaf over the wealth and only then did the pan balance. Through this incident Shrikrushna has taught that He can be won over not with wealth, but only with detachment. In Marathi, the term, ‘Placed a tulsi leaf on the house’ is often used, which means sacrificing the worldly life to serve the Nation and Dharma (Righteousness).

5. Norms to be followed during the worship of Shri Vishnu

6. Some prayers to be made to Shri Vishnu

A. Prayers to be made before commencing the worship of Shri Vishnu

B. Prayers to be made to the respective Deities on the day of Holy/Religious festivals

The five main Holy texts of followers of Vaishnav sect are collectively known as the Pancharatna (Five jewels). Vishnusahastranam is one Pancharatna. It comprises 107 Shlokas and has been included in the Anushasanparva of Mahabharat. Whoever recites Vishnusahastranam daily, obtains the three Purusharthas of Dharma,Artha and Kama. This assurance has been given in Mahabharat.(Mahabharat, Parva 13. Adhyaya 135, Shloka 124).

This is to be recited every day. Usually, it should not be interrupted.

This mantra consists of sixteen words –

These sixteen words are associated with the sixteen kalas of the embodied soul. Thus, it is a mantra which destroys the covering of Maya(The Great Illusion) on the embodied soul. Some sects which worship Shrikrushna chant the second half of the mantra first and then the first half.

These are taken from Kriyayogasara Vaishnaviteupa-Purana. ‘Om NamoNarayanaya’, the eight (In Sanskrut) letter mantra is called Narayan-mantra. It is also known as mantraraja (King of mantras). This mantra is believed to symbolise the eight images of Shri Vishnu, namely Panchamahabhutas, the sun, the moon and the host performing the Yadnya, as also the eight matras of the Omkar.Ramanujacharya, the Vaishnavite Saint, was initiated with this mantra.

Meaning : We know Narayan. We meditate on Vasudev. May the same Shri Vishnu inspire our intellect benevolently.

Ekadashi is the tithi (A lunar day) of Shri Vishnu. It is also called ‘Haridini’. Ekadashis are two types –

Smarta and Bhagawat. The Shaiva sect worship on the day ofSmart Ekadashi; whereas, the Vaishnvav sect worship on the day of Bhagawat Ekadashi. Whenever the two Ekadashis appear in the same fortnight, the Shaiva sect consider the first as the Smart Ekadashi and the Vaishnvav sect considers the second as the Bhagawat Ekadashi. Whenever there is no separate mention, it is assumed that both the Ekadashis have appeared on the same day. There are two Ekadashis per month, meaning 24 in a year.

The vrat(Vowed religious observance) of Ekadashi, like other vrats, need not be commenced after making a resolve and through ritualistic worship. This is such an important vrat because – Depending on the time, the proportion of Sattva, Raja and Tama components in the individual keeps changing. On the day of Ekadashi, sattvikta(Purity) of all the living beings is highest. Hence, if we fast on this day and increase our sattvikta, we can imbibe the waves of Shri Vishnu that are in abundance on this day to a greater extent. It is best if we eat nothing on the day of Ekadashi and drink only water and consume powder of dry ginger mixed with sugar. If this is not possible, eat only items that are permitted on the day of the fast. After fasting on the day of Ekadashi, break the fast the next day. The vibrations of Shri Vishnu reaching the earth on the Ekadashis of the Shukla Paksha of the lunar months of Ashadha and Kartik are in much greater proportion than on Ekadashis of any other lunar month; hence,the greater importance to the two Ekadashis (pertaining to ShriVishnu)

This is a prevalent vrat that is performed for the fulfilment of specific desires. It has been said that whoever has devotion and faith can perform the vrat of ShriSatyanarayan puja on any day. The days of Pournima, Amavasyaand Sankrant are favourable for this vrat. The time of sunset,meaning, the gorajmuhurt (Auspicious time) is a preferable time for the puja; however, it is acceptable if the puja is performed at sunrise. If the puja is performed in the evening, then the people who will be performing the puja have to fast during the day. Bathe before commencing the puja and apply kumkum tilak. Make the arrangements of the puja in a manner that the performer preferably faces the east. He should never face the south. Distressing energies emanate from the south, and if the performer of the pujasi ts facing the south, these can cause obstacles in the vrat. During the puja, while pronouncing each Name in Vishnusahastranam,offer one tulsi leaf to Shri Vishnu. If 1000 tulsi leaves are notavailable, offer 108.

Shri Vishnu is a Deity that encompasses the world. It is advised to perform Vishnuyaga(Fire-sacrifice) for neutralising demerits and fulfilling wishes. The ritual has been explained in Rugveda. It has no relation to Shrouta karma (Vedokta karma); hence, it is called Smart karma. In this Yaga, while offering the oblation to the fire for the sake of Shri Vishnu, after reciting each Rhucha of Purushasukta, the line ‘Narayanayaswaha’ is to be recited.

12. Worship necessary as per the times