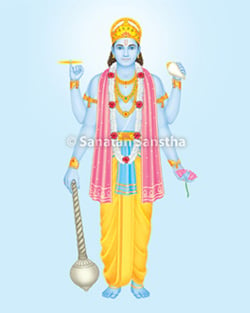 Narayan is a Deity from the post-Rugveda period. The word Narayaṇ is derived from ‘nar’ which means Apa (Absolute Water) and ‘ayan’ which means location. Thus, One who dwells in the region of Apatattva (Absolute Water Principle) is Narayaṇ. In this definition, the meaning of Apa should not be restricted to water. In the initial stages of the existence of earth, everything was in Ape form. Later, the environment was created from Apa. What we call water was created much later through a gross (meaning physical) process. The all-pervading Shakti in the very beginning is termed Apa here; effectively, it means that the Principle from which the world was created is Narayaṇ.

This is a form of Narayaṇ. The serpent Here clines on is the King of Patal (Hell region). ‘Palam’ in the word ‘Patalam’ is from Tamil which means water. There is no word such as ‘alam’ in Sanskrut.

They were born to Murti (Daughter of Daksha) and Dharmarhushi (Son of Deity Brahma) and were partial Incarnations of Shri Vishṇu. The abode of Nar-Narayaṇis Badrikashram. Nar-Narayaṇ later took birth as Arjun-Krushṇa.’(Shrimadbhagawat)

Nar (Man) was created from the man part of Narsimha (Man-lion) and Narayaṇ from His lion face (Kalikapuraṇa, Adhyaya 29). Some special characteristics of Nar-Narayaṇ are given in the table ahead.

The Navanarayaṇs nurture the nine serpents in the Vishwakunḍalini (Dormant spiritual energy in the subtle-body).

The group of nine Siddhas (Highly evolved people) from the Nath sect constitutes the Navanaths. The Holy text Navanathbhakti sarenumerates the pairs of the Navanaths and the Navanarayaṇs, whose respective Incarnations they are. These pairs are given in the table ahead.

Narayaṇ was considered to be a form of Deity Shiva. This concept of Narayaṇ not being separate from Shiva becomes clear after seeing the Idols of Narayaṇ at Shivasamudram, Shrirangam & Shrirangapattnam (These are pilgrimage centres in South Bharat). In South Bharat, Narayaṇ is called Shriranga or Ranganath. Among these three pilgrimage centres, Shivasamudramis originally a Shaivite centre of pilgrimage. The characteristic of Narayaṇ’s Idol is that it is always in a reclining posture. However, the reclining posture does not mean asleep as the eyes are half-open.