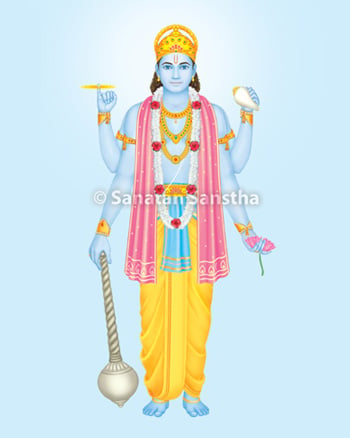 1. Origin and meaning of Name Vishnu

A. Yaska has derived this word from ‘Vish’ which means to be constantly active (Nirukta 12.19).

B. Yaska has also opined that the word Shri Vishnu has been derived from the Sanskrut word ‘vish’, which means to pervade, and based on this, Sayanacharya too has defined the word as vast or all-pervading (Commentary on Rugveda, Mandal 1, Sukta 154, Richa 1, 5). In accordance with this meaning, a commentary on the Vishnusahasranam says – ‘चराचरेषुभूतेषुवेशनाद्विष्णुरुच्यत’ – He is called Shri Vishnu because He pervades all animate and inanimate creation.

C. ‘वेवेष्टिइतिविष्णु: ।’ – One who pervades the universe is Shri Vishnu.

D. ‘विशेषेणस्नौतिवाविशेषेणगच्छतिइतिविष्णुः।’ – One who melts with compassion for His devotees is Shri Vishnu or one who goes around in a specific manner (keeps moving), who travels throughout the universe is Shri Vishnu.

Vishnusahasranam is a famous stotra of Shri Vishnu. Amidst recitation of these thousand Names, Shri Vishnu is ritualistically worshipped with an offering of tulsi (Holy basil) leaves or lotus flowers. Although, all the Names mentioned in Vishnusahasranam are Shri Vishnu’s Names, according to the doctrine ‘Word, touch, form, taste, fragrance and their energies coexist’, different Names activate different Shakti (Divine Energies). This can be understood from the lines of the following stotra. 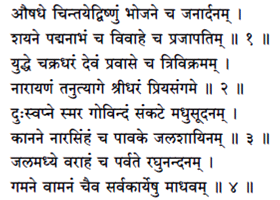 The six virtues – wealth, Dharma (Righteousness), success, opulence, spiritual knowledge & detachment are known as ‘bhag’. One who possesses these virtues is called Bhagawan in Sanskrut. Followers of Bhagawat sect refer to Shri Krushna and Shri Vishnu as Bhagawan.

1. This is a Deity from the post-Rugveda period. The word Narayan (नारायण) is derived from ‘nar’ which means Apa (Absolute Water) and ‘ayan’ which means location. Thus, One who dwells in the region of Apatattva (Absolute Water Principle) is Narayan. In this definition, the meaning of Apa should not be restricted to water. In the initial stages of the existence of earth, everything was in Apa form. Later, the environment was created from Apa. What we call water was created much later through a gross (meaning physical) process. The all-pervading Shakti in the very beginning is termed Apa here; effectively, it means that the Principle from which the world was created is Narayan.

3. ‘Nar’ is knowledge and ‘ayan’ is the path. Narayan is the path that leads to self-realisation.

This is a form of Narayan. The serpent He reclines on is the King of Patal (Hell region).

Just as Shri Vishnu’s abode is Vaikuntha, Shiva’s is Kailas, so also Narayan’s abode is Shwetadeep.

‘They were born to Murti (Daughter of Daksha) and Dharmarhushi (Son of Deity Brahma) and were partial Incarnations of Shri Vishnu. The abode of Nar-Narayan is Badrikashram. Nar-Narayan later took birth as Arjun-Krushna.’ (Shrimadbhagawat).

Narayan was considered to be a form of Deity Shiva. This concept of Narayan not being separate from Shiva becomes clear after seeing the Idols of Narayan at Shivasamudram, Shrirangam & Shrirangapattnam (These are pilgrimage centres in South Bharat). In South Bharat, Narayan is called Shriranga or Ranganath. Among these three pilgrimage centres, Shivasamudram is originally a Shaivite centre of pilgrimage. The characteristic of Narayan’s Idol is that it is always in a reclining posture. However, the reclining posture does not mean asleep as the eyes are half-open.

Followers of the Vaishnav sect call the Mahanarayan Tej (Kundalini) in the body Narayani.

Kirit means a crown. Among the superior Deities, Shiva does not wear a crown. It is in this context that Shri Vishnu is said to be wearing a crown.

Meaning : Whoever I bestow My grace upon, I take away everything (including sorrow) from him.

कः + ईश = केश (व) (Kaha + Ish = Kesh [v]). Here ‘kaha’ means sons or grandsons. One who is bestowed with sons or grandsons, meaning, One who bestows sons or grandsons is Keshav. ‘Kaha’ also means Deity Brahma, Dakshaprajapati, Kashyap, Vayu and Sun. ‘Ish’ means God, One who has control. One who keeps Deity Brahma, Dakshaprajapati, Kashyap, Vayu, Sun etc. under His control, meaning, who is ‘Ish’ (Supreme God) to all of them, is Keshav. The word Keshav has such an expansive meaning; hence, it earned the honour of being the first among the 24 Names.

Go + vid = Govind. ‘Go’ means cow, earth, Heaven and Veda. ‘गां अविन्दत इति गोविन्दः ।’ – One who has been given Kamadhenu (Divine, wish-fulfilling cow) by the ocean, One who saved the earth through the Incarnation of Varaha, One who was given Heaven by Deity Indra and One who protected the Vedas by taking up the form of a fish is Govind.

1. Madhu + sudan = Madhusudan. Meaning of the Sanskrut term ‘sudan’ is to destroy or eliminate. ‘मधुं सूदयति इति मधुसूदनः ।’, meaning, One who has destroyed the Demon named Madhu is Madhusudan.

2. ‘सर्वतत्त्वमयत्वाच्च मधुहा मधुसूदनः ।’- There are 24 fundamental Principles. Among all these Principles, Shrikrushna is the foremost and hence, He is called Madhuha or Madhusudan. (Mahabharat)

Tri+vikram = Trivikram. ‘Tri’ means three. The word ‘vikram’ has many meanings such as speed, departure, stepping, victory, valour, courage. Hence, the word Trivikram could be defined as ‘त्रिषु लोकेषु गुणेषु वा विक्रमः पदविन्यासः स्थितिर्वा यस्य सः त्रिविक्रमः । – One who encompasses the three regions of Heaven, earth and Hell and extends beyond. It also means, One who upon conquering the three basic components of Sattva, Raja and Tama transcends them, is Trivikram. Trivikram is associated with Vaman, Incarnation of Shri Vishnu.

As mentioned above, Vaman is associated with the Vaman Incarnation of Shri Vishnu.In Sanskrut, Vaman is broken up as ‘वामयति मदं इति वामनः ।’ – One who ensures discarding of the ego is Vaman.

There are many meanings of the word ‘Shri’ – Wealth, Lakshmi, prosperity, riches, elderliness, beauty, lustre, fame, Saraswati, virtues & the three Purusharthas of Dharma (Righteousness), Artha (Material gain) and Kama (Desire). ‘श्रियं धारयति इति श्रीधरः ।’- One who takes on ‘Shri’ in any of the above ways is Shridhar.

‘पद्मं नाभौ यस्य सः ।’ The Name Padmanabha has been interpreted thus in Sanskrut. Padma means nadi-chakra. All the chakras that find a mention in the science of Yoga are assumed to be in lotus form. The Name Padmanabha indicates Shri Vishnu’s mastery over Yoga.

1. ‘Daman’ is a rope used for tying cattle or a simple rope. ‘दाम उदरे यस्य सः दामोदरः ।’ – One whose stomach has been tied with a ‘daman’ is Damodar. This refers to the incident where Yashoda had tied Shrikrushna to a stone mortar using a ‘daman’.

2. Another meaning of the word ‘dam’ is ‘binding’. One who binds the entire world is Damodar.

3. Yet another meaning of ‘daman’ is ‘donor’ or ‘generous’. One whose stomach is generous, meaning, One who has accommodated the entire Creation, universe in His stomach is Damodar.

‘Dev’ means organs. The organs dwell in Him. He is the source of Creation and Dissolution of the collection of organs; hence, He is known as Vasudev. He is omnipresent and the entire universe is within Him; therefore, scholars know Him as Vasudev. He dwells in all the Panchamahabhutas; hence, He is called Vasudev.

Pradyumna means Deity Madan or Kamadev. Shri Vishnu is also identified as Kamadev. It is Shri Vishnu who enticed demon Bhasmasur by taking up the Mohini form and killed him; hence, the Name Pradyumna.

Aniruddha means One whose speed (of movement) can be restricted by none. Shri Vishnu has an unrestrained movement everywhere (in the universe); hence, He is Aniruddha. The name of Pradyumn’s son, meaning, the grandson of Shrikrushna is also Aniruddha.

‘उत्तमः पुरुषः पुरुषोत्तमः ।‘ – Supreme among the men is Purushottam. This Supreme Being not only encompasses but also nourishes all the beings. He is perpetual (cannot be destroyed); hence, is termed Purushottam.

Adhaha + aksha + ja = Adhokshaj. ‘अधः कृतं अक्षजं ज्ञानं येन सः अधोक्षजः ।‘ – That knowledgeable God, in front of whom knowledge acquired through the senses turns out to be too inferior, is Adhokshaj. A common man acquires knowledge through the sense organs. On the other hand, God is entirely in knowledge-form. He needs no medium to acquire knowledge.

Supreme among the men is Nrusinha or Narsimha (Man-lion). Shri Vishnu was half-man and half-lion in Nrusinha Incarnation, and in this form, He killed Hiranyakashyapu; hence, the Name Narsimha.

One who is never displaced from His position, whose position is always supreme, is Achyut. Meaning of the word ‘Achyut’ is – that which is indestructible.

Up + Indra = Upendra. He is the younger brother of Deity Indra. ‘Indra’ also means soul and the word ‘up’ means proximity. Hence, Upendra means One who is in close proximity to the soul, meaning, the Paramatma (Superme soul). Shri Vishnu is Paramatma-form, and from this perspective the Name Upendra suits well.

One who eliminates sorrows is Hari.

One who attracts ‘Shri’ is Shrikrushna. The word Krushna has been derived from the root ‘Krush’, which means ‘to plough’. ‘Krush’ is a word associated with earth, meaning, power. On the other hand, the word ‘na’ is associated with happiness. By uniting these words and their meanings, Shri Vishnu, meaning, Krushna becomes the existing and Anand (Bliss) form.

Shri Vishnu lives only with His devotees. Shri Vishnu’s abode is Vaikuntha (Shri Vishnu’s region). Shri Lakshmi is the daughter of the King of Hell. Hence, Shri Vishnu goes and lives in Kshirasagar (The celestial ocean). Yet, His real dwelling place is where His devotees sing His glory.

विकुंठा – विगतः कुण्ठः यस्मात्। – That from which all impurity has been wiped out is Vaikuntha. Vaikuntha means ‘Blissful’. Vaikuntha is the region of Shri Vishnu. It is above the seven regions of Heaven and is divinely beautiful. Jay-Vijay are the gatekeepers of Vaikuntha and allow only devotees of Shri Vishnu to enter. A river named Viraja flows through Vaikuntha. Devotees of Shri Vishnu who live in Vaikuntha sit on the banks of this river and perform spiritual practice. Since Shri Vishnu possesses the basic components of all foods, splendour of all sorts is present in His region. There are also musicians who play stringed musical instruments. Gandharvas (Celestial musicians), Yakshas (Demigods) and celestial Kinnars (Singers) sing in front of Shri Vishnu.

In the Brahman age, Shri Vishnu’s three foot steps have been clearly associated with the earth, space and Akash (Absolute Ether). This is known as Vishnukram.’ Space is the void between two regions, (for example – that between the earth and Heaven). Akash is a void, even the void between two most subtle particles.

In the universe there is a ‘zero route’. This itself is known as the Vishnumarg. There is no friction while traversing this path. It extends from Vishnulok to Patal. Narad can travel along this path; hence, He is able to reach the earth or Patal from Vishnulok in a moment.

Kundalini
Dormant spiritual energy in the subtle-body. It is coiled like a serpent and consists of one central channel and two channels on its sides
Vishnulok
Abode of Srivishnu
Vedas
The most sacred Hindu scriptures, revealed directly by God
Tulsi
Holy basil plant
Tama
One of the three components in the Universe denoting inertia and ignorance
Stotra
Holy hymn; These hymns praise aspects of the divine, such as Devi, Shiva, or Srivishnu
Mandal
Protective sheath
Dharma
Righteousness
Achaman
Sipping water from the cupped palm thrice, while uttering the first three of the twenty-four names of Srivishnu and releasing the water into a plate from the palm while uttering the fourth name.
Anand
Bliss
Sattva
One of the three components in the universe, signified by purity and knowledge