Saints, Prophets, Astrologers and others have predicted that the coming times are going to be very adverse, when besides our own health, caring for the health of our relatives will be a big challenge. During adversities, usually communication breaks down. It becomes difficult to take patients to a hospital, contact some doctor or buy medicines. 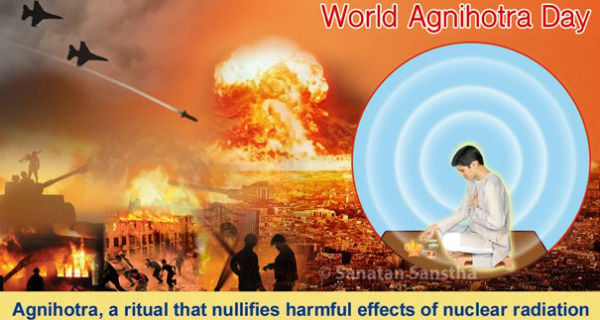 Saints who can see the past, present and future have already predicted that dreadful adverse times are approaching and a large population of the world will perish. Instead of saying these are approaching, we should say these have already begun. World War III will be fought in these adverse times. Most countries now have more destructive weapons when compared with World War II; they will use these against each other. To survive this war, effective measures to neutralise the effect of nuclear weapons are essential. Similarly, measures are also necessary to ward off the radiation effects of nuclear bombs. For this purpose, merely physical remedies will not suffice, because a nuclear bomb is subtler than a usual bomb. There are increasingly more effective steps such as the physical (Example, destroying the enemy with an arrow), physical and subtle (Example, shooting an arrow after reciting a mantra), subtler (Example, only reciting a mantra), and subtlemost (Example, a resolve of the Saints). The subtle level is many times more effective than the physical level. Therefore, to prevent the radiation from destructive weapons such as a nuclear bomb, some subtle remedial measures will have to be taken. Accordingly, Sages have advised performing Agnihotra – the first incarnation of Yadnya (Sacrificial fire). This remedy is very easy and takes a short time to perform; yet, it is a very powerful medium that has subtle effects. It charges the environment with Chaitanya (Divine consciousness) and creates a protective sheath.

Performing Agnihotra daily is beneficial not only from the point of view of coming adverse times but otherwise too. Here, we introduce the readers to Agnihotra. More information on Agnihotra is given in Sanatan’s Holy text on the subject. Readers should keep it in their collection.

A Divine worship done with oblations in Agni (Fire).

A. Importance of Agnihotra

1. Agni generated from Agnihotra disintegrates Raja-Tama particles and lingers for a long time in the atmosphere. Therefore, practising this regularly creates a protective sheath around an individual upto a radius of 10 feet. This sheath is very sensitive to the contact of anything that is related to Tej (Radiance). This sheath looks reddish in the subtle dimension.

2. When Tej associated with virtuous objects comes in contact with the sheath, the reddish Tej particles of the sheath absorb it and further strengthen the sheath.

3. Since the Raja-Tama-predominant Tej particles strike a very harsh note, this protective sheath senses their approach much in advance. Then this sheath, as a reflex action, emits multiple Tej ripples from within with tremendous force and destroys the harsh sound as also the Tej particles that produce these sound waves. As a result, the Tej in these destructive waves becomes powerless to strike. Since the striking destructive energy rings emitting from the atom bomb are already destroyed by the sheath, it becomes incapable of spreading radiation. Therefore, even if the bomb is dropped, the loss of life is avoided to some extent.

In the event of a bomb detonation, the rapidly flowing Raja-Tama-predominant waves in the form of Tej emitted by the bomb strike this subtler sheath of Agni in the atmosphere and disintegrate in this sheath; their subtle effect is also destroyed instantly, and the atmosphere becomes free from the danger of further toxic pollution.

2. Nature and process of Agnihotra

The sun emits and absorbs energy; hence, a state essential and nourishing for eradication of pollution is automatically created. Therefore, the earth attains Shanti (Peace).

Agnihotra is akin to a generator that generates power and the flames are like a turbine – the engine driven by the generator. When cowdung cakes, cow’s ghee and unbroken rice grains come together through the medium of Agni, they create a unique energy that strikes the surrounding objects, envelops them and destroys the harmful forces within them, thus making the environment nourishing. Later, the nourishing energies are provided, which help in survival, development and growth of organic elements in the environment. In this manner, Agnihotra directly repairs the damage caused to the atmosphere.

2A. Havan (Offerings to the fire)

2A1. Havanpatra : Vessel required for the offerings.

2A3. Procedure of Agnihotra

2. Method of kindling the fire

Keep a small, flat piece of cowdung cake at the bottom of the vessel, and above it arrange cowdung cakes smeared with ghee in such a manner (2-3 layers of vertically and horizontally arranged cowdung cakes) that there is free flow of air within the spaces. Then, take a piece of cowdung cake, apply a little ghee to it and after kindling it, keep it in the Agnihotra vessel.

After some time, all the cowdung cakes will start burning. For kindling the fire, you can use a hand-held fan. However, never blow air from the mouth; else, germs from the mouth will enter the fire. Do not use inflammable substances such as kerosene to kindle the fire, since the fire should remain smokeless.

2B. Mantras to be recited

Take two pinches of rice grains on your palm or in a copper plate and add a few drops of cow’s ghee to it. Precisely at sunrise / sunset, recite the first mantra once and take the mixture of rice grains and ghee in the pinch (made by joining the middle finger, ring finger and thumb of the right hand). Offer the mixed ingredients (Rice grains sufficient to fill a pinch) to Agni while pronouncing ‘swáahá’.

Again, offer the mixture of rice and ghee to Agni with the right hand when reciting the second mantra once while pronouncing the word ‘swáahá’. 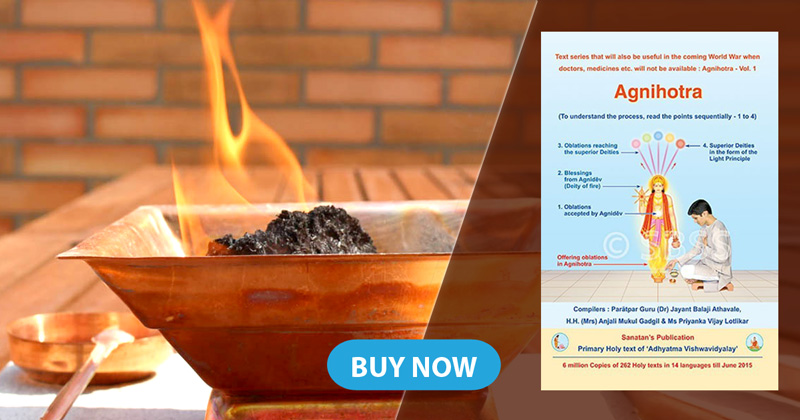 A. Ingredients used as oblations

Tej (Radiance) created by burning cow-dung cakes is in physical form and hence, it stabilizes in the earth’s atmosphere in the form of manifest Tej.

Tej in flowing form is created through the medium of rice grains in the atmosphere at the level of Apatattva (Absolute Water Principle). This is the one that appears as Divine bright radiance.

Through the oblation of ghee, this divinity in Tej form blends at the level of Akashtattva (Absolute Ether Principle) in a very short time and generates unmanifest Tej, meaning, Tej that bestows cool feelings and is associated with Chaitanya (Divine consciousness) at the subtle-most level. This very Chaitanya in the form of Tej can protect the people for a very long time from the toxic pollution caused by a nuclear war.

B. Spiritual level of the individual

It is important to keep in mind that the protection levels being discussed are in a nuclear holocaust environment. Hence, the benefit that the ritual of Agnihotra can provide is severely restricted compared with in a peace-time scenario.

A seeker whose spiritual level is above 50% can perform the havan (Offering of oblations in the fire) by reciting the mantra only once or just by offering a prayer instead of reciting a mantra.

Even if these seekers pray for the creation of the protective sheath twice a day in the period of the havan, this prayer itself will have the effect of actually performing the havan, and an invincible protective sheath that can protect the seekers will be created in the atmosphere. This itself proves the importance of the spiritual level and prayers.

Effects as per the spiritual level of the individual performing Agnihotra :

When a person performs Agnihotra, a few factors come into play that define the efficacy of the ritual in neutralising the effect of nuclear radiation. The table ahead shows the effect on a person (depending on his spiritual level and spiritual attitude or state) while performing the ritual of Agnihotra.

C. Duration for which the effects will last

If Agnihotra is performed repeatedly for many days, then an impenetrable protective sheath can get created.

If the havan is performed with complete sharanagatbhav, the duration of its effect increases in terms of years, that is, the havan performed twice a day can provide protection for eight days. In other words, a havan performed twice a day for one month can provide protection for eight months. In this manner, if the process of havan is performed consistently, then the protective sheath created due to sharanagat-bhav by God’s grace will last nearly four months, that is, the protection will last for a maximum period of one year.

D. Who gets more benifits ?

4. Acts to be performed after Agnihotra

After Agnihotra, reserve as much time as possible for meditation. At least meditate till the fire settles down.

B. Preserving the Vibhuti (Sacred ash)

Sometime before the next Agnihotra, take out the Vibhuti from the vessel used for havan, and store it in a glass or earthen container. This can be used as a fertilizer for plants and for preparing medicines. Vibhuti obtained from Agnihotra or sacrificial fires can be used for blowing it in the atmosphere or for applying it to the body. It can be used for purifying the premises through the act of blowing, for removal of distressing energy covering on the body by applying it to the skin, and for internal cleansing of the body by drinking sacred liquid made from the Vibhuti. Through the intake of the smell the Vibhuti, body gets cleansed at subtle level, unwanted thoughts and doubts from the mind are eliminated resulting in the mind becoming refreshed and cultivation of sattvik Tej-oriented frequencies of thoughts occur in the body.  Vibhuti obtained from one Agnihotra can be used up to 2 days, else it should be stored in a sattvik place so as to preserve the Chaitanya present in it.

5. Necessity of performing rituals
such as Agnihotra, Yadnya-yaga in every house

If Agnihotra, Brahmayadnya, Yadnya-yaga and rituals such as homa-havan are performed as samashti sadhana in every house, the congregation that takes place in the atmosphere at the level of Tejtattva with the help of mantras will act as a protective sheath when required. This sheath can combat and destroy the highly dreadful radiation emitting from the use of nuclear bombs. This is because the energy generated through the Yadnyas being subtle-most in action will destroy the Raja-Tama-predominant radiation active in the subtle form, and thus protect the human race.