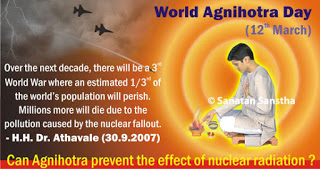 In many articles on the Internet, the ritual of Agnihotra has been promoted as a simple ritual that helps minimise the adverse impact of nuclear radiation. The statement piqued our interest, because for modern science this is a fantastic proposition – that a simple ritual at sunrise and sunset along with the recitation of a mantra can actually quell the harmful effects of nuclear fallout. This ritual also becomes relevant with some other information we have received through spiritual research about the coming times.

Most people do not know that there are measures that can be taken at the spiritual level along with efforts at the psychological and physical level to defend against a nuclear attack. This article explains the measures we can take at the spiritual level to protect ourselves from the effects of a nuclear attack and for the prevention of its occurrence.

2. Protection from a nuclear
attack on one performing Agnihotra

Damage caused by nuclear explosions can vary greatly depending on the weapon’s yield (measured in kilotons or megatons), the type of nuclear fuel used, the design of the device, whether it is exploded in the air or on Earth’s surface, the geography of the target and whether it is winter or summer, hazy or clear, night or day or windy or calm. Whatever the factors though, the explosion will release several distinct forms of energy as given in the immediate and delayed effects above. It also shows the level of destruction / level of protection experienced in the case of a person at 50% spiritual level practicing Agnihotra regularly.

Much of the damage (approx 50%) inflicted by a nuclear explosion is the result of its shock wave. The blast wave pressure deposits energy in the material it passes through, including air. When the blast wave passes through solid material, the energy left behind causes damage.

Along with the blast approximately 30-50% of the energy of the destruction is due to thermal radiation. Even if one is many miles away from the blast, one is able to view a bright flash created by the exploding bomb. In addition to being intensely bright, this radiation is intensely hot (hence the term ‘thermal’). At 7 kms. away from the source of the blast, one will experience third degree burns, which cause tissue death all the way through the skin, including to the stem cells required to regenerate skin tissue. A third degree burn over 25% of the body (or more) will typically precipitate shock in minutes and would require prompt medical attention.

A nuclear detonation creates several forms of nuclear or ionizing radiation. The nuclear fission (atom splitting) and nuclear fusion (atom combining) that occur to produce the explosion release, either directly or indirectly, neutrons, gamma rays, beta particles, and alpha particles. (In the case of a 1 megaton explosion the effect of ionizing radiation (measured at 500 rems) is estimated to be 3.1 kms. from ground zero.)

1. Neutrons are heavy particles that are released from atoms’ nuclei. These tiny ‘missiles’ can easily penetrate solid objects.

2. Gamma rays are another penetrating form of radiation that are energetic photons. Both these types of radiation can be deadly.

3. Alpha and beta particles are less dangerous, having ranges of several centimeters and several meters respectively.

4. Alpha particles can cause harm only if they are ingested.

One effect of nuclear weapons detonated on or near the Earth’s surface is the resulting radioactive fallout. Immediately after the detonation, a great deal of earth and debris made radio-active by the blast is carried high into the atmosphere forming a mushroom cloud. The material drifts downwind and gradually falls back to Earth, contaminating thousands of square miles. The larger the explosion, the higher and faster the fallout is lofted, and the smaller the proportion  deposited in the lower atmosphere. This fallout can continue to impact residents in the area and far off areas for many years.

When a nuclear device is detonated, it gives rise to Raja-Tama-predominant vibrations of the Tejtattva. Discordant subtle-sounds accompany these vibrations. These subtle-sounds have a subtle harmful effect on the mind and intellect of the people in the vicinity of the nuclear attack. This can range from depression or negative thoughts to fogging up of the intellect.

When the ritual of Agnihotra is performed, it gives rise to Sattva-predominant vibrations of the Tejtattva. The fire created from Agnihotra disintegrates Raja-Tama particles and hence, purifies the environment at the spiritual level. It also creates a subtle protective sheath around the person performing the ritual. This sheath is highly sensitive to anything related to the Tejtattva and in the subtle-dimension this sheath looks reddish.

This destroys the Raja-Tama-predominant Agnitattva particles that give rise to the sound vibrations. As a result, the destructive Agnitattva  vibrations from the detonated nuclear device lose their power.

4. Role of spiritual practice
and spiritual level in protection

The major events that happen in a person’s life are primarily due to their destiny as per the law of karma. The best way to overcome adverse destiny (which is a spiritual problem) is to perform spiritual practice.

By performing appropriate levels of spiritual practice, one can overcome destiny. For example, if one has medium destiny, only an intense amount of spiritual practice (of around 10-12 hours a day) can help overcome it. If one has severe destiny, only the grace of a Saint can help in overcoming the destiny. Even if one has to die in the coming times as per destiny, due to spiritual practice at least a negative impression of fear will not be created in the seeker’s mind as he/she goes to the afterlife. For a person not performing any spiritual practice, suffering and then dying after a weapon of mass destruction is detonated scars his/her subconscious mind with impressions of fear that may sometimes take lifetimes to overcome.

We urge relevant authorities in various countries to help people begin their spiritual practice, and along with that, the ritual of Agnihotra to minimise the damage from a nuclear holocaust.