1.1 One who gets rid of obstacles (Vighnaharta)

1.2 One who eliminates distress caused by distressing energies

1.3 One who augments the vital energy (pranshakti)

1.6 One granting an embodied soul (jiva), the permission to take birth

1.7 Worshipped by all sects

1.9 Expert in music and dance

On account of this attribute, He is worshipped before commencing any function right from a folk dance for entertainment to a wedding and all rituals including house-warming (gruhapravesh). (Refer: ‘Meaning of Vighnesh’)

1.2 One who eliminates distress caused by distressing energies

1.3 One who augments the vital energy (pranshakti)

Various body functions in man occur due to various types of energies. The basic energy of all these energies is the vital energy. Repetition (chanting) of the Name of Shri Ganapati augments the vital energy in our body.

Refer: ‘Meaning of Vidyapati’. ‘There is an ancient custom of writing, ‘Shri Ganeshaya namaha, Shri Sarasvatyai namaha, Shri Gurubhyo namaha’, that is obeisance to Shri Ganesh, deity Sarasvati and the Guru, before beginning any writing, for example a letter. Why is this order followed? Knowledge of any subject is first acquired through the intellect and Ganapati is the bestower of intellect. Hence ‘Shri Ganeshaya namaha’ is written first. Deity Sarasvati’s mission is to put into words the knowledge acquired through the intellect. Sarasvati is called “abhinav vagvilasini”, the deity of development of speech by Saint Dnyaneshvar and “shabda mul vagdevata”, the deity of the origin of words by Saint Samarth Ramdasswami. Hence, deity Sarasvati is second in the order. Since the Guru is the medium of acquisition of knowledge and its transcription into words, He is third in the order.’

Maharshi Vyas wanted an intelligent writer to write the Mahabharat. So He prayed to Shri Ganapati to undertake this task.

First repeat (chant) the Names – Brahma, Vishnu, Mahesh and Ganapati for one or two minutes each and if you see light, assess whether it is faint or bright. Only then read further.

From the above table, one will realise that a greater number of seekers got the spiritual experience of seeing light by repeating (chanting) the Name of Ganapati than with the Names of Brahma, Vishnu and Mahesh. This will also clarify why Ganapati is referred to as one who converts the language of sound into that of light.

1.6 One granting an embodied soul (jiva) the permission to take birth

Maha (the embodied soul taking birth) is born with the permission of Ganapati.

1.7 Worshipped by all sects

A sect is ‘one which considers only its deity of worship (upasyadevata) to be supreme and believes that it alone is responsible for the creation, sustenance and dissolution of the universe; it does not believe in other deities’. Despite the existence of several sects, every sect performs the ritualistic worship of Shri Ganesh. The Shaiva sect considers Ganapati to be the son of Shri Shiva and His main attendant (gan) whereas in the Vaishnav sect He has various forms like Aniruddha, Vasudev, etc. The Shakta (Divine Energy) sect is of two types – Dakshinmargi and Vamamargi, both of which worship Shri Ganesh. In this sect, Shri Ganesh is portrayed along with His consort as Shaktiganapati or Lakshmiganapati as well as worshipped in the feminine form too. Shri Ganesh is worshipped by the Jain sect too. Charumati, the daughter of Emperor Ashok who professed Buddhism, built a Ganesh temple in Nepal. Literature on Shri Ganesh mentions that the idol of Shri Ganesh installed in that temple, popularly known as ‘Heramb’, is seated on a throne and has five heads and ten arms. 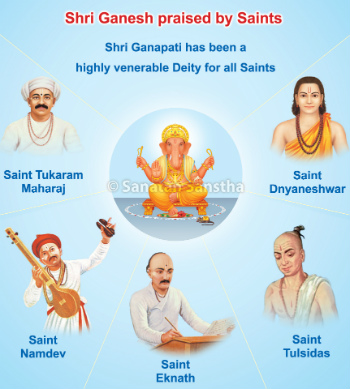 Although saints following different paths of spiritual practice may worship various deities yet all of Them have earnestly prayed to and sung the praises of Shri Ganesh. Shri Ganesh is highly venerable to all saints. Marathi literature authored by saints has described the worldly and spiritual nature of Shri Ganesh in a beautiful manner. The great saint, Shri Dnyaneshvar has offered His humble obeisance unto Shri Ganesh, ‘O Shri Ganesh, You alone enlighten our intellect (implied meaning).’ Saint Eknath has offered obeisance unto Shri Ganesh at the very beginning in His commentary on the holy text, Bhagvat, ‘Though the universe has originated from the Omkar, Shri you existed even before. You are the master of knowledge in vedas, vedants and different sciences in the universe. Of all those worthy of salutation, you are the Supreme.You are the master of all and everything lies within you (implied meaning).’ It is said that Saint Tukaram Maharaj had invited Shri Viththal and Shri Ganesh for a meal, both at the same time. Saint Namdev has said, ‘O Lambodar, (another name of Shri Ganesh) with your trunk, you vanquish all obstacles (implied meaning).’ Saint Tulsidas too has sung praises of Shri Ganesh at the commencement of His ‘Ramacharitamanas’.

1.9Expert in music and dance

Omkar is the manifestation of Brahman in the form of sound. Shri Ganesh is also referred to as ‘Shriganesh whose form is of the nature of Omkar.’ Numerous verses in the Shriganesh Varadstotra clearly illustrate the relationship of Shri Ganesh with music. The devotional songs (abhang) composed by Saint Dnyaneshvar, Saint Namdev, Samarth Ramdasswami and others also illustrate the close relationship of Shri Ganesh with music. One also comes across idols of Shri Ganesh in dance postures. This idol of Ganapati has a golden complexion with eight arms and His left leg rests on a lotus while the right leg is in mid-air. Sage Madhva has sung praises of the treasure of dance postures possessed by Shri Ganesh,’O Shri Ganesh, You are the vanquisher of all obstacles, the compassionate One, the One praised in all the three worlds and the Master of dance and music (implied meaning).’ The poet Moropant has excellently portrayed the beautiful and attractive form of Shri Ganesh through his masterly and imaginative exposition of words while narrating that the dance performed by Shri Ganesh puts to shame even celestial singers (gandharva) and celestial dancers (apsara).

According to the Purans, Shiva is the father, Parvati the mother and Skand is the brother of Ganapati. Shiva and Parvati are His parents implies that the Ganesh frequencies are generated by the confluence of the radiant (tej) frequencies of Shiva and Minakshi.

The word vahan (वाहन) is derived from the root, vru-vaha (वृ-वह) which means, to transport. The vehicle of deities changes according to their mission. The vehicle mostly used by Ganapati is the rat. But He has other vehicles as well. A (आ) + vahan (वाहन) = avahan (आवाहन) which means, to invoke. A deity does not manifest itself without invocation, that is without an invitation. (However, if a devotee is in distress then it rushes to his rescue even without invocation.) Thus when a deity is invoked to carry out a mission, the vehicle should complement that mission, for instance, a lion for a battle. The vehicle of Heramb Ganapati is the lion while that of Mayureshvar Ganapati is the peacock.

Vedas
The most sacred Hindu scriptures, revealed directly by God
Satsang
Company of the God Principle