A. Parvati creating Shri Ganesha from her grime

Once Deity Shiva goes away for a long period. Parvati, who is left behind, is advised by Lakshmi to create a son from her grime so that she would have company and the son would uplift the Universe. At her insistence, Parvati makes an idol of a boy and breathes life into it. He is the revered auspicious Ganesha. The days pass by and news of Shiva’s return reaches Parvati. As she is getting ready to welcome Shiva, due to constant disturbances caused in her bath, Parvati instructs Ganesha to guard the door and not to let anyone inside. Gaurinandan Ganesha stops everyone at the door like an obedient son. Bear in mind that Ganesha has not set eyes on Shiva yet.

Shiva comes there and while going inside to meet Parvati, Ganesha stops Him too. Despite telling Ganesha to let Him go, Ganesha does not allow Him to enter. Many Shiva-devotees, sages and Gods request Ganesha to let Shiva in; but Ganesha does not budge from His stand. Moreover, with His inflated ego, He derisively challenges them to wage a war with Him. In fact, Ganesha forces the others to fight with Him; He ties up Deities, harasses sages and seers; and doesn’t listen to anyone. Deity Shiva, therefore, comes there again and tries to reason with Ganesha; but Ganesha insults even Shiva, derides Him and aims ‘astras’ (weapons) at Shiva. Shiva is left with no choice and beheads Him. Everyone is stunned to see this. When Devi Parvati comes to know about the incident, She insists Shiva to revive Ganesha and when that is not done, she takes on a formidable, destructive form. All Deities request Shiva to make Ganesha alive in the interest of the Universe. It is, however, impossible to make Ganesha alive in His original form. So, Shiva instructs that another head must be joined to Ganesha’s body. He further says that before sunset if any animal is willing to give its head up, that head should be brought and fixed.

‘Gajasura’ is an elephant that Shiva-doots come across. Gajasura had performed severe penance to please Shiva. Gajasura requested Shiva to remain in his belly; but Brahma and Vishnu dissuaded Him from doing so and in turn bestowed a boon that in the future, Gajasura would always be with Shiva. This highly learned Gajasura gets an opportunity to take advantage of that boon so he becomes very happy and gets ready for the sacrifice. His head is brought back and joined to Ganesha’s body and Shiva revives Ganesha.

2. Story appears fabricated in absence of clarification of doubts

We have heard the story of Shri Ganesha’s birth since our childhood; that Parvati makes Ganesha from her grime; He is killed by his own father, Shiva; Shiva gives re-birth to Shri Ganesh by implanting an elephant’s head on Ganesha’s body.

Some of the ‘obvious doubts’ that arise in our minds are :

How can a live idol be made from grime ?

Why would a father kill his son that too for a trivial reason ?

Why can’t Shiva join Ganesha’s own head, but installs an elephant’s head instead ?

How is this all possible ? etc. and we feel that such stories are figments of imagination.

Later, by reading other stories to satiate the curiosity of our children and for the clarification of doubts, its hidden meaning comes to light; but real meaning as per spiritual science is still not understood.

3. Implied meaning of the story 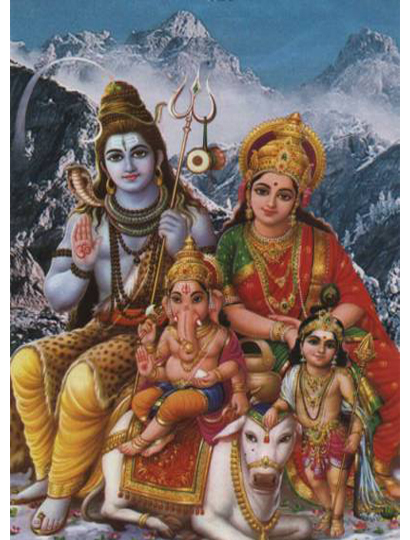 So, lets understand the very implied meaning of the happenings further.

‘Aadishakti’ Parvati is the mother of the world. Whole nature is created from Her. She gives power to Shiva as she is the embodiment of Power. It is said that without Her, Shiva is like ‘ Shava (lifeless body)’. The body made of ‘Panchamahabhutas (the five Cosmic Elements)’ has limitations; but with the power of ‘sadhana (spiritual practise)’, Parvati goes beyond all such limits; therefore, she can merge with God. Is there anything impossible for such superpower ? So, she could create a son from Her grime that is part of Her ‘chaitanya i.e. divine consciousness’.

B. Deity Shiva, the Father of the world, punishing His conceited son, for welfare of the world !

Ganesha was very powerful; but one becomes conceited, arrogant due to power if such power is not associated with ‘sattvikata (purity)’. He becomes destructive. At the time of His birth, Parvati has selfish thoughts that her son should always obey Her. Now, anything done with selfish thoughts drifts away from ‘Sattvikata (purity and holiness)’. So, Ganesha crosses all limits of prudence while obeying His mother; exhibiting no sense of mercy, pity or forgiveness. Such power tilts more towards ‘Raja/Tama’; rather becomes pre-dominant with ‘Tama’ and same thing happened with Ganesha. Ganesha had enormous power as He was made from grime of ‘Aadishakti’; but had ‘Raja-Tama’ intellect. He was created for the welfare of the Universe. Omniscient Shiva had realized that such tainted intellect would not do anything in the interest of world, in fact, would cause harm to the world. Shiva had to, therefore, decide to sever head of His son. Because without doing that, owing to Ganesha’s tainted intellect and inflated ego, the world would have been endangered .

So great is this Father, who severs head of His own son, for welfare of the entire world !

A. Those, denigrating Shri Ganesha through paintings or idols, should not draw His wrath!

Many a times, we come across paintings or idols of Shri Ganesha made by anti-Hindus making mockery of the Deity. One gives form to God as he perceives God by worshipping Him. ‘Sattvik’ person will perceive Ganesha in ‘sattvik’ form; e.g. idol made by Moraya Gosavi (a great Ganesh devotee of the past from Chinchwad, Pune, Maharashtra); whereas a ‘Tama-predominant’ person will see Shri Ganesha as per his own defects; so idol made by such person will be ‘asattvik(impure)’. Instead of drawing Shri Ganesha’s qualities and frequencies; such idol will draw more perversion. ‘Sanskars’ which will increase respect, reverence and faith towards Shri Ganesha are therefore inculcated amongst children at very young age as per Hindu culture. Where there is lack of such culture, lack of knowledge about own Deities and there is superstition instead of faith, such perverted, anti-Hindus only dare to denigrate Deities in the name of art or sometimes in the name of individual freedom; else due to ego of power ! But they forget that the great Father of the world, who could sever His own son’s head, for destroying his inauspicious, conceited nature; for protection of devotees and for welfare of the world, will certainly teach a lesson to such denigrating destroyers of culture ! Why should one draw His wrath ?

B. Know the importance of auspicious Shri Ganesha !

Shri Ganesha is ‘Trigunaatit (beyond the three components viz. Sattva-Raja-Tama)’, ‘Shaktitrayatmaka’, auspicious, eliminator of obstacles and helps in successful completion of task. He is master of all directions (Gana-nayak – ‘Gana’ means directions and ‘Nayak’ denotes the master), good leader and very powerful. He is also very benevolent and for this, Shri Ganesha is worshipped before undertaking any task at hand. Children are told to write Shri Ganesha’s name before starting studies. All ‘pujas’ performed in Hindu Dharma are started with ‘puja’ of Shri Ganesha by invoking His presence first, for facilitating arrival of all Deities for the ‘puja’. Today’s generation needs to understand this significance of Shri Ganesha.

Many times, parents take children to show them different decorations and scenes erected in marquees during Ganesha Festival. Earlier, people used to erect scenes from mythological stories during Ganesha festivals and we too used to take our children to see them. Children used to ask questions out of curiosity; but how can we answer their questions when we ourselves do not have much knowledge. Thus, children’s curiosity cannot be satisfied and they feel that all stories are fabricated. They don’t get answers to their questions during the period of their education and in the absence of ‘Dharma-shiksha (Dharma-education)’, they drift away from their own culture. Obviously, we have no answers when followers of other Sects, or some atheists, or persons with perverted mind, or so-called intellectuals and overtly modern people ask as to why should we consider our Hindu Dharma and culture superior when monkey, elephant, snakes are worshipped in this Dharma’.

Hindus need to learn about importance of various festivals celebrated by them, try to know the significance of customs and traditions, significance of our Sages and Seers praising Deities in different manner since ancient times, their advising different observances and penance for acquiring God’s grace. These Sages and Seers did penance and worshipped God to acquire Deities’ grace and boons for welfare of the world. They acquired knowledge on different subjects by undertaking spiritual practice and made it available for mankind. We should always be grateful to them for their benefaction. Let us undertake spiritual practice and acquire God’s grace by becoming His devotees. Today, all human beings have become devoid of ‘sanskars’ and are trying to destroy this universe in their quest to satisfy their selfish desires. We are on the verge of destruction; and at this stage, do not need science; but only spirituality; Dharma and Deities are only going to save us; however, spiritual practice is necessary for the same.