Shri Ganapati is referred to as ‘Omkarvadan’. Omkar and Shri Ganapati are not distinct but the same. ‘Om Ganesho vai Brahma’ (‘ॐ गणेशो वै ब्रह्म’), is a quote from the Ganeshtapini Upanishad. The Atharvashirsha Upanishad also states that ‘Om Gan Om’ (‘ओम् गं ओम्’) is a sign of the worship of Ganeshbrahman. Similarly, ancient literature like Chhandogya, Taittiriya, Mandukya, Narad, Prashnopanishad and Kathopanishad has mentioned ‘Om’ as the sacred syllable form. We come across worship and praise of Shri Ganapati in several suktas (Hymns) from the Rugveda and Yajurveda, too. This shows that worship of Shri Ganapati was in practice since the Vedic Era.

Let us learn about specific substances used in the ritualistic worship of Shri Ganapati. 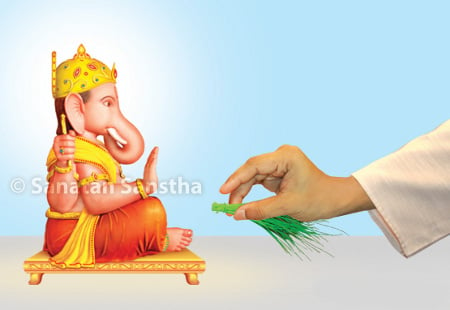 Durva, a sacred grass, has special significance in the ritualistic worship of Shri Ganapati.

Reason according to Puranas

Reason according to Ayurveda

According to Ayurveda, too, durva juice reduces the burning sensation in the body.

Generally one of the aim of performing ritualistic worship is to increase the divinity in the Idol we worship and to gain benefit of it’s Chaitanya (Divine consciousness). Hence, it becomes imperative that substances attracting maximum amount of that Deity Principle be offered to the Deity. Durva has the maximum capacity to attract Shri Ganapati Principle, hence it is offered to Shri Ganapati. 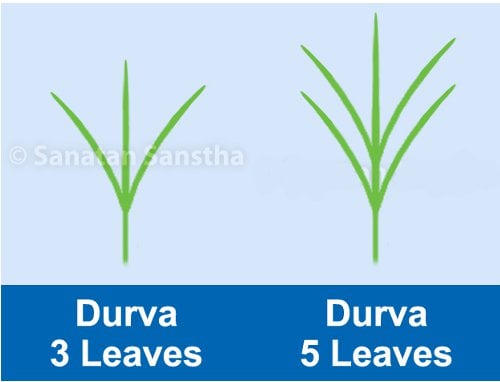 The durva to be offered to Shri Ganapati should be tender. It is referred to as ‘baltrunam’, that is young grass. The durva stalks offered should have leaves in odd numbers like 3, 5 or 7.

What should be the length of the durva ?

Earlier, the Idol of Shri Ganapati used to be about one meter in height. Hence, durva offered was about as long as samidha (Sacrificial firewood). If the Idol itself is of the height of samidha, then durva of shorter length should be offered. On the other hand, even if the Idol is huge, the durva should be as long as the samidha.

How many durva should be offered ?

Odd numbers are associated with the Shakti (Divine Energy) Principle. Durva is mostly offered in odd numbers (minimum of 3 or 5, 7, 21 etc.). This facilitates the entry of Shakti into the Idol in a greater proportion. Usually, 21 shoots of durva are offered to Shri Ganapati. The number 21 according to Numerology is 2 + 1 = 3. Shri Ganapati is associated with the number 3. Since the number 3 represents Creation, Sustenance and Dissolution, it is possible to destroy the 360 (Raja-Tama) waves with its energy. If durva is offered in even numbers, then more and more of the 360 waves are attracted first and later the 108 (Sattva) waves too. (Ravan used to offer 360 + 108 = 468 shoots of durva everyday.)

The entire Idol of Shri Ganapati, excluding the face, should be covered with durva. Thus, the fragrance of durva will spread around the Idol. Since the Idol is covered with durva, this fragrance assumes the form of the Shri Ganapati Idol and facilitates attraction of pavitraks of Shri Ganapati to this form. This is called the acquisition of similar qualities by the Idol. This is what is called ‘awakening’ of the Idol. The Idol is consecrated (also known as pranapratishṭha) to prevent the pavitraks from escaping, which have entered in it. The pavitraks remain in a greater proportion so long as the fragrance remains. In order to retain them there, the durva are changed thrice a day. Hence, ritualistic worship is performed thrice a day.

There is presence of Agni (The Deity of fire) in the shami tree. The Pandavas had kept their weapons in the hollow of a shami tree to retain their radiance. Sticks of shami are used for creating fire through friction.

There is a difference between rui (Cotton) plants and mandar (Coral) trees. The fruits of rui are coloured, while those of mandar are white. Just as mercury is a chemical among medicines, coral is a medicine among trees. 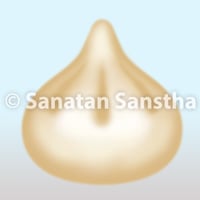 On the day after Shri Ganesh Chaturthi, that is, on Rushipanchami, the mouse, which is the vehicle of Shri Ganapati, is offered Naivedya of kheer (A sweet delicacy prepared from milk and rice).

7. Reason for not offering tulsi (Basil) leaves to Shri Ganapati 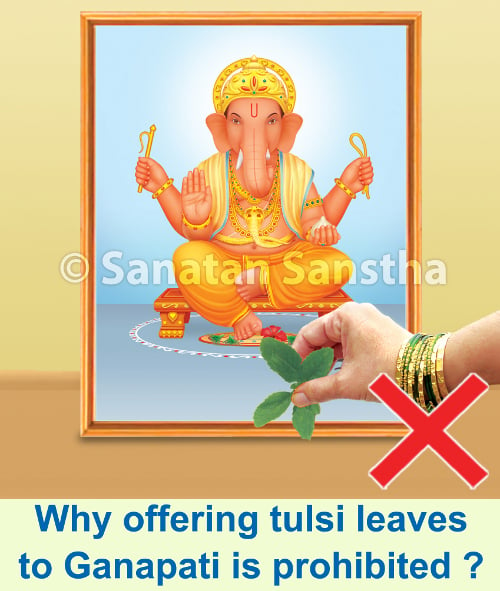 Reason according to Puranas

There was a celestial singer, who was very beautiful. She wished to have a good husband. She performed various Holy acts like chanting, performing vrats (Vowed religious observances), going on pilgrimages etc, in order to fulfill her wish. One day, she saw Shri Ganapati engrossed in meditation. She instantly fell in love with Him. To awaken Him from meditation, she called Him, “O Ekadanta, O Lambodar, O Vakratunḍa !”. Due to the interruption, Shri Ganapati opened His eyes. Seeing the celestial singer in front of Him, He said, “O Mother, why are you interrupting my meditation ?” To this she replied, “I like you very much. I want to marry you”. Shri Ganapati replied, “I will never marry and get entrapped in the noose of attachment”. To this, the singer said, “I curse you that you will marry for sure”. Shri Ganapati cast a counter curse, “You will become a tree on earth”. The singer regretted her behaviour and sought forgiveness. Shri Ganapati said, “O Mother, Shrikrushna will marry you and you will be happy”. The celestial singer took birth as a tulsi plant on earth. Shri Ganapati never patronised the tulsi plant; hence, the tulsi leaves are never offered to Him.

Shri Ganapati is a Deity mainly worshipped with expectations; whereas, the tulsi plant represents detachment; hence, offering of tulsi leaves to Ganapati is prohibited.