Spirituality is a science of the subtle dimension. Hence, it is natural that spiritual knowledge be approached in a scientific way. For instance, if we are a devotee of Shri Ganapati, we should strive to obtain fundamental knowledge about Shri Ganapati from the theoretical as well as the practical aspects to generate and increase our bhav (Spiritual emotion) towards Him. It is this bhav that will enhance spiritual practice and lead to spiritual progress certainly and swiftly. This article aims to provide the devotees with some vital information on Shri Ganapati, His uniqueness and special missions in God’s Creation.

Origin & Meaning of the word Ganapati

Why is Shri Ganapati worshipped before any other Deity ?

No other Deity can arrive at the venue of worship from any direction without the permission of Shri Ganapati. Hence, Shri Ganapati is always worshipped first while performing any religious function or before worshipping any other Deity.

Once Shri Ganapati clears the directions (of obstacles), the Deity to be worshipped can come to the venue. This is called Mahadwar Puja or Mahaganapati Puja. (In the Ganapatya sect, the word Ganapati is used instead of the word ‘Brahman’ and ‘Mahaganapati’ instead of ‘Parabrahman’.) Since He is called Vighnaharta, Shri Ganapati is worshipped before commencing any function, right from a folk dance to a wedding and all rituals including the inauguration of a house.

Different bodily functions are carried out by different types of subtle energies. The fundamental of all these energies is called the Prana-shakti. Chanting the Name of Shri Ganapati augments the Prana-shakti in our body.

‘Shri Ganapati absorbs the polluted energies from the universe and awakens the conscience in a person’s intellect. As a result of worshipping Shri Ganapati, the tendency to doubt does not arise. The intellect remains stable and the subconscious mind is at peace.’ – H.H. Parashram Pande Maharaj, Sanatan Ashram, Devad, Panvel, Maharashtra

Knowledge about any subject is first obtained through the intellect and Shri Ganapati is the bestower of intellect. That is the reason behind the ancient Bharatiya custom of writing ‘|| Shri Ganeshaya Namaha ||’ before beginning any writing; for example, a letter, an invitation to a ceremony etc. This is also the reason why, when Maharshi Vyas wanted an intelligent writer for the Mahabharat, He prayed to Shri Ganapati to undertake the task.

Maha (An embodied soul taking birth) is born with the permission of Shri Ganapati.

Worshipped by all sects

Despite the existence of several sects, every sect in Hindu Dharma performs Shri Ganesh puja – the ritualistic worship of Shri Ganapati at the beginning of any task. In the Shaiva sect, Shri Ganapati is considered to be the son of Shiva and as chief of His attendants; whereas in the Vaishnav sect He is seen in forms like Aniruddha, Vasudev, etc. In the Shakta sect (which worships Shakti) Shri Ganapati is portrayed in the married form as Shaktiganapati or Lakshmiganapati, and is worshipped in the feminine form too. The Jain sect too performs Shri Ganesh puja. 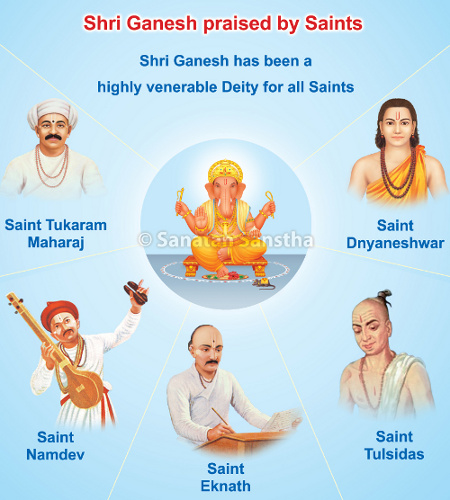 Although Saints following different paths of spiritual practice worship different Deities, all have been unanimous in their earnest prayers unto Shri Ganapati and singing His praises. Shri Ganapati has been a highly venerable Deity for revered Saints in all times, such as Saint Dnyaneshwar, Saint Eknath, Saint Tukaram Maharaj, Saint Namdev, Saint Samarth Ramdas Swami and Saint Tulsidas.

Expert in music and dance

Once blessed by Shri Ganapati, an individual attains mastery over speech.

After obtaining the above-mentioned information, it is important for the devotee of Shri Ganapati to understand the several types of effective spiritual practices they can undertake to obtain His blessings. Some methods are as follows :

7. Informing others about the science behind Shri Ganapati’s worship

9. Trying to prevent the rampant denigration of Shri Ganapati through various mediums

All the above-mentioned methods are effective in raising our understanding of Shri Ganapati Principle.

The tithi, that is, the date as per the Hindu lunar calendar on which the frequencies of Shri Ganapati Principle descended on Earth for the first time was chaturthi. Hence on chaturthi the vibrations of Shri Ganapati come on the Earth in higher proportion.

In every month there are two chaturthis.

A) The Vinayaki chaturthi that falls in the bright fortnight of the month, that is, Shuklapaksha

B) The Sankashti chaturthi that falls in the dark fortnight of the month, that is, Krushnapaksha

The chaturthi that falls on a Tuesday is called ‘Angaraki chaturthi’.

A) Apply the sandalwood paste to Shri Ganapati with the ring finger.

B) Offer the hina scent.

G) Offer the arati to Shri Ganapati three times in a clock-wise direction.

Special substances used in the worship of Shri Ganapati

In order to get more spiritual benefit of Shri Ganesh Principle, the use of incense sticks of sandalwood, kevada, jasmine and khas fragrance is beneficial

After the ritualistic worship, modaks are offered to Shri Ganapati as a Holy sacrament and kheer to the mouse, His vehicle.

Ruddhi-Siddhi the consorts of Shri Ganesh

Flow and counterflow of energy and Shri Ganesh’s Riddhi-Siddhi

Whenever this energy or Shri Ganesh become extrovert and gets activated, the embodied soul performs worldly actions and this energy is said to be attained.

Whenever this energy or Shri Ganesh becomes introvert, gets activated and flows, the path of the embodied soul expands with the objective of attaining a supernatural state of the soul.

Who started the practice of pradakshina (Circumambulation) ?

As per Purans (eighteen sacred Holy texts compiled by Sage Vyas) Shri Ganesh the bestower of intellect was the first to circumambulate Shiva and Parvati, His parents.

Shri Ganapati is easily pleased and fulfil desires fast in the Kaliyug (Era of strife) ?

In the Kaliyug only two Deities are easily pleased and fulfil desires fast ‘कलौ चंडिविनायकौ –Chandi Devi and Vinayak, that is Ganapati.

Greater details on Ganesh are given in the Ganesh Puran, Mudgal Puran, Ganesh Mahatmya, Padmapuran, Bhavishyottar Puran, Lingapuran, Brahmavaivartapuran and Shivapuran. Some references are found in the Mahabharat. But this is a Vedic Deity and His refence in the Vedant is as follows.

‘Sage Vyas told Shri Ganesh at Yaval that He would have to write what he says continuously, without stopping. Sage Vyas began His narration and Shri Ganesh kept writing. His pen suddenly got spoilt but since He had been told that He should not stop, He quickly broke one tusk and continued writing with it. Ever since He is called Ekadanta (the one with one tusk).’ – Mr. Tukaram Joshi, Shivajinagar, Vada (Thane) (Akkalkot Swami Darshan, year 33, Issue 4)

Tithi
A lunar day
Shlokas
Specifically denotes a metered and often rhymed poetic verse or phrase. Shlokas are usually part of stotras which are prayers to the Deities.
Naivedya
Food offered to the Deity as a part of ritualistic worship
Kaliyug
Era of strife (The present era, amongst the four eras)
Dharma
Righteousness
Ashram
A place where a seeker can remain engrossed in spiritual practice through spiritual discipline
Anand
Bliss