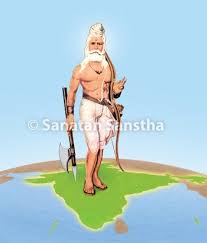 Parashuram is 6th incarnation of Shri Vishnu. Sage Jamadagni (of the Bhrugu dynasty) and Reṇuka were the parents of Parashuram. Reṇuka was the daughter of a Kshatriya (Warrior). However, Jamadagni being a Brahmaṇ, Parashuram too became a Brahmaṇ. The Ashram of Sage Jamadagni was situated on the banks of River Narmada. Parashuram was born there in the nineteenth Tretayug (in the transition period between the Treta and Dwaparyug according to the Mahabharat). Reṇu means particles of earth. Reṇuka performed the spiritual practice of the water element, meaning, she was a water-seeker. Hence, she could fetch water in pots made of wet clay. Jamadagni performed the spiritual practice of the fire element. Jamat is a type of fire. Jamat also means are solute wish.

A. Slaying of unrighteous Kshatriyas (Warriors)

Parashuram did not kill all Kshatriyas all together, but only the Kshatriya kings who were evil.

Kartavirya abducted Kamadhenu (The Divine wish-fulfilling cow) and her calf from Sage Jamadagni’s Ashram. This happened in Parashuram’s absence. Upon His return, realising what had happened, Parashuram vowed to slay Kartavirya. In the ensuing battle between them on the banks of River Narmada, Parashuram slew Kartavirya. Thereafter, complying with His father’s directives He embarked on a pilgrimage for austerities.

After Parashuram left, to avenge the death of Kartavirya, Haihaya beheaded Sage Jamadagni. When this news reached Parashuram, He returned to the Ashram. There were twenty-one arrow wounds on the dead body of Jamadagni. Seeing them, Parashuram instantly pledged that He would circumambulate the earth twenty-one times to punish and rid the earth of evil Kshatriyas and Haihaya because of the slaying of a Brahmaṇ by them. According to this vow, Parashuram slayed the unrighteous Kshatriyas and retreated for penance to the Mahendra Mountain. Whenever there was a rise in evil warriors, He would return and slay them. He completed twenty-one such missions. He fought the last battle on the Samanta-panchaka. There, He washed His axe soaked in the blood of the Kshatriyas and lay it down.

B. Erecting temples of Kshetrapaldevata(Deities of territories)

While circumbulating the earth twenty-one times, Parashuram established 108 Shaktipeeṭhas (Seats of Divine Energy), meaning, pilgrimage centres – temples of territorial Deities. Before Parashuram, these places were known to Saints; however, none erected temples or established peeṭhas there.

Parashuram, who knows all the four Vedas by heart (meaning, He has complete knowledge of the Vedas) carries a bow and arrow on His back (meaning He is courageous); effectively this means that there is presence of Brahmatej (Radiance of a Brahman) and Kshatratej (Radiance of a Kshatriya) in Him. Whoever opposes Him will be vanquished by Parashuram either with a curse or an arrow.

B. Passing His Tej to Shriram

Upon hearing about the fame of Shriram (the son of Dasharatha), Parashuram wanted to test Shriram’s bravery and hence, He once obstructed His path. He offered His bow to Shriram and told Him to bend it and mount an arrow on it. When Shriram complied and asked where He should shoot the arrow, Parashuram replied, ”Nullify my activity on this land of Kashyap”. Shriram obliged. Then, Parashuram gifted that bow to Shriram and thus passed His Kshatratej to Shriram.

After laying down His arms, Parashuram gave up His feeling of hatred towards Kshatriyas and began teaching archery to Brahmaṇs as well as Kshatriyas without prejudice. Great archers mentioned in the Mahabharat (such as Bhishmacharya, Droṇacharya etc.) were disciples of Parashuram.

Due to His mission of destroying the Kshatriyas, He became the master of entire earth. As a result, He also acquired the right to perform the Ashwamedha Yadnya (A yadnya [Ritual of sacrificial fire] performed by ancient Bharatiya kings to prove their imperial sovereignty). So He first bathed in all the places of pilgrimage, circumambulated the earth thrice and then performed the Yadnya. The Yadnyavedi of the sacrificial fire was made of gold and was ten vanva (Distance between the arms when extended sideways) long and nine vanva high. At the end of the Yadnya, Parashuram offered the entire land He had acquired to the officiating priest of the sacrificial fire, Sage Kashyap.

Kashyap realised that so long as Parashuram continued to live on earth, Kshatriyas would not prosper. Hence, He said to Parashuram, “The land you have offered me in the Yadnya now belongs to me. You have no right to stay on my land anymore”. Thereafter, making the sea recede, Parashuram created His own new territory. The area from Vaitarana to Kanyakumari is known as the Parashuramkshetra (Parashuram’s territory).

He is one among the Saptachiranjivi (Seven immortals);however, Mahabharat states that during the manvantar (a period) He will renounce His body.