1. Dharma does not mean religion 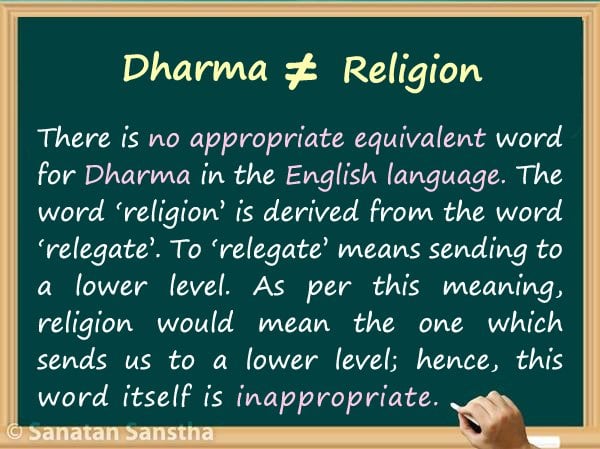 Quotes such as ‘One cannot live without religion’ and ‘Religion is the opium of the people’ are contradictory and create confusion in the minds of ordinary people. When we talk about Dharma (Righteousness), most people relate it to words such as Hinduism, Islam, Christianity, Buddhism etc. Others think that, since Bharat is a secular state, religion is an untouchable topic. There is no appropriate equivalent word for Dharma in the English language. The word ‘religion’ is derived from the word ‘relegate’. To ‘relegate’ means sending to a lower level. As per this meaning, religion would mean the one which sends us to a lower level; hence, this word itself is inappropriate. On the contrary, Dharma is one which elevates us to a higher plane.

According to Shri Shankaracharya : ‘Dharma is that which accomplishes the three tasks of keeping the setup of the society in excellent condition, bringing about the worldly progress of every living being, and facilitating their progress in the spiritual realm as well.’ We understand from this definition the vastness of Dharma and its extraordinary importance in human life.

2. Dharma in context of an individual

The mediums through which the two goals – Abhyudaya (Rise to prosperity) and Moksha (Final Liberation) are attained is Dharma. When an individual performs Dharmacharan (Abiding by Dharma in daily life) during the course of his life, he evolves spiritually. He attains positive momentum even in life after death, meaning, he attains a place in superior regions such as Maharlok, Janalok and Tapolok. As per Swami Vivekananda, Dharma means actual Atmanubhuti (Spiritual experience of the soul).

3. Dharma in relation to the society as well as an individual 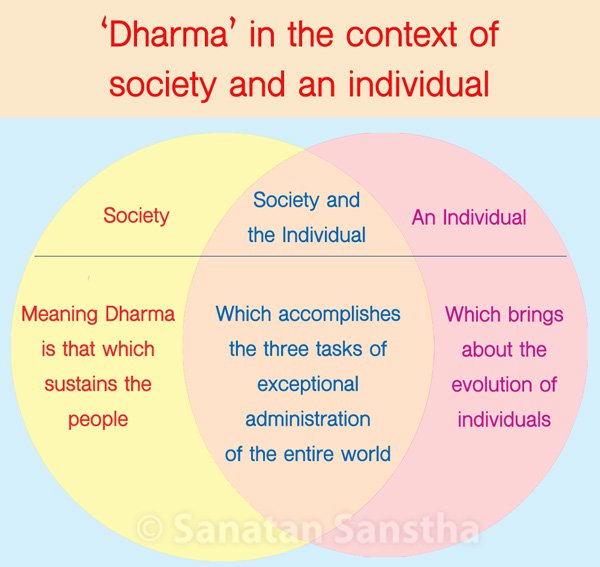 (From the preface to the commentary on Shrimadbhagwadgeeta)

Meaning : Dharma is that which accomplishes the three tasks of exceptional administration of the entire world, bringing about the worldly progress of every living being and causing progress in the spiritual realm (attaining Moksha) as well.

According to the Compilers of Dharmagranths (Scriptures that explain the science of Dharma), the scope of definition of the word ‘Dharma’ is not restricted to indicating merely a sect for doing spiritual practice; but it also incorporates the activities that an individual has to perform and the restrictions that he has to observe in an individual capacity to attain individual (his own) progress and that in the capacity of a component of society to further the progress of the human race.

B. Vedadharma or Vedic Dharma

Veda means knowledge, the subject matter of knowledge or the means to acquire it. Knowledge, in this context, refers to the knowledge of the soul, the realisation of God or spiritual experiences.

The Holy text Merutantra defines the origin of the word ‘Hindu’ (हिंदु)  as ‘हीनान् गुणान् दूषयति इति हिंदुः ।’ means that which destroys the mean and inferior Raja-Tama components. One who rejects the inferior Raja-Tama components and the resultant physical, verbal and mental inferior activities, and one who is engrossed in the Sattva predominant component and therefore, considers devotion unto God as the essence of life and thereby seeks God and further, strictly adheres to Karmayoga (Path of Action) so as to guide the society, is to be termed ‘Hindu’. Such is the expanded origin of the word Hindu. Thus, the term Hindu is an attitude (Sattva predominant). – H.H. Kane Maharaj, Narayangaon, District Pune, Maharashtra.

The sole eternal goal of Spirituality as perceived by Hindu Dharma is to display the God Principle in human beings, rather bring about the manifestation of God in them. – Shri Aurobindo (Vandemataram, 24.6.1908)

Hindu Dharma provides education on loving everyone and provides extreme freedom of thought. Importance of Hindu Dharma is as follows

Hinduttva is a doctrine of Chaitanya (Divine consciousness). Chaitanya sustains the Creation and hence, Hindu Dharma is also known as ‘Chaitanyadharma’.

Since Dharma is created by Ishwar (Supreme God), it is also called ‘Ishwari Dharma’.

Manav (Humans) are Sanatan, meaning ancient. Hence, Dharma is also called Manav Dharma. Though, thus said, not just human beings but the entire creation is given consideration in this definition.

Saint Dnyaneshwar has addressed Dharma as ‘Vishwadharma’, for human birth is for the realisation of the universe pervading God. –  H.H. Kane Maharaj, Narayangaon, District Pune, Maharashtra.

2 thoughts on “What is Dharma?”