From the point of view of a restricted meaning, Dharma is of the following types. 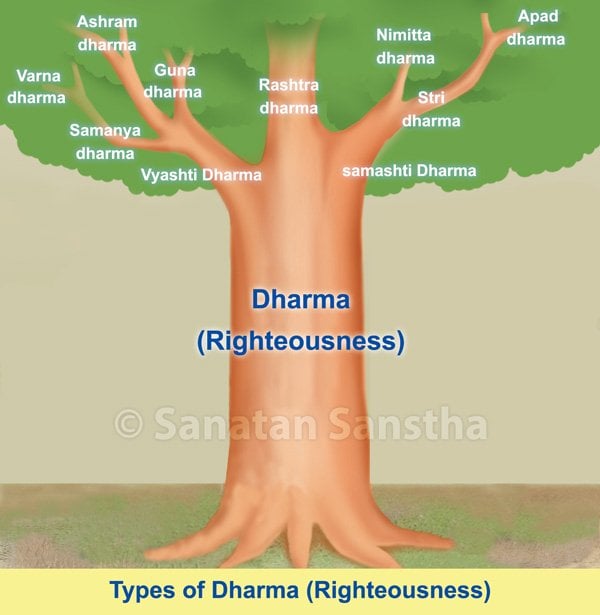 1. Samanyadharma (Morality, qualities of the soul)

Meaning : Samanyadharma includes mercy, truth, control over the mind, purity, offerings, control over the senses, non-violence, service unto the Guru, pilgrimage, compassion, honesty, absence of greed, honouring Deities and Brahmans and not criticising anyone.

2. Varnadharma (Dharma of a class)

3. Ashramdharma (Dharma according to stages of life)

Brahmacharyashram, Gruhasthashram, Vanaprasthashram and Sanyasashram are the four ashrams. This is limited to a particular stage of life.

4. Varnashramdharma (Dharma
according to the class and stages of life)

This is applicable to an individual of a particular class in a particular stage of life, for example, a Brahman in the stage of celibacy should use a staff made from the palas (Flame tree) and deerskin for a seat.

5. Gunadharma (Dharma according to the qualities)

This refers to the duty to be performed in accordance with the role one is playing or the position one is occupying, for example, the duty of a King is to nurture his subjects. The attributes of the five cosmic elements are also called gunadharma, for example, the gunadharma of water is coolness, liquidity, to flow from high to low area etc.

6. Apaddharma (Dharma in times of adversity)

This is expressed by the quote ‘आपदिकर्तव्योधर्मः ।’ which means, the code of Dharma that should be followed during a calamity. In the system of the four classes, each class is assigned duties as per Dharma. ‘Often due to unforeseen reasons such as Divine and earthly (spiritual or physical) crises, revolutions, famine, forcible migration etc., there is a sudden collapse in the system of classes, and it becomes impossible for people to perform karma prescribed according to their class. This hampers the means of their livelihood. Under such circumstances, according to an arrangement created by the Scriptures as an exception, an individual belonging to one class is allowed to accept the Dharma of the other classes. This arrangement is called Dharma in times of adversity.

Shruti means the Vedas. Shroutadharma includes worship of Agni (Fire), performing Yadnyas (Sacrificial fires) such as Darshapurnamas and Somyag described in the Shrutis.

Smartadharma includes the rules and codes of conduct to be adopted by the classes and in the various stages of life as described in the Smrutis.

This incorporates the rules, the knowledge about which is acquired from the behaviour of renowned personalities from the society.

8. Stridharma (Dharma of a woman)

To a woman her husband is her God, companion and seat of refuge. A woman cannot progress spiritually without a husband. Truly, a husband is equivalent to God. A Woman should not listen to her husband and also the elders in the family as well when not following Vedic Dharma and when asking for unwholesome food during sickness.

Dharma is symptomatic in a dual way – pravrutti (Worldly life) and nivrutti (Renouncing the worldly life). Pravrutti Dharma can be the attribute of a Nation. Here both vyashti(Individual) and samashti (For the sake of society) conditions are given due consideration. This consideration in itself is the relativity. Nivrutti Dharma is related only to vyashti. Hence, non-violence can be the Dharma of vyashti since staying away from day-to-day activities is a major part of spiritual practice therein. But this is not the case with a Nation. In this case, it is all about activities on a day-to-day basis. In such a case, presence of Brahmatej (Radiance of knowledge) and Kshatratej (Radiance of a warrior) are required. As a result, in these activities the non-violence that destroys the Truth is avoided, meaning, in that situation the violence itself becomes non-violence (Dharma) and the activities in which the Truth destroys the non-violence, are to be avoided. While avoiding such activities untruth becomes Truth. – H.H. Kane Maharaj, Narayangaon, District Pune, Maharashtra.

The spiritual practice of putting in efforts for the elevation of the Nation is Rashtradharma. Information on Rashtradharma is given in the Holy text by Sanatan Sanstha on the topic of establishing a Divine Kingdom.

Vedas
The most sacred Hindu scriptures, revealed directly by God
Shudra
The class that performs manual / physical work
Karma
An act that becomes destiny, meaning, leads to a give and take account that has to be settled
Dharma
Righteousness
Brahmatej
Radiance of a Brahman