It is next to impossible to present the pictorial biography of a great personality gifted with so many virtues and saturated with Divine Consciousness. It is due to Divine grace alone that we are making a small attempt to present selected photographs of H.H. Baba which we humbly offer at His Holy feet 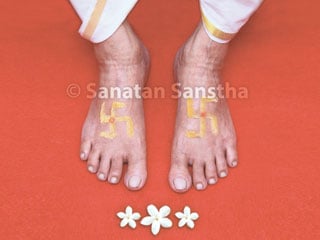 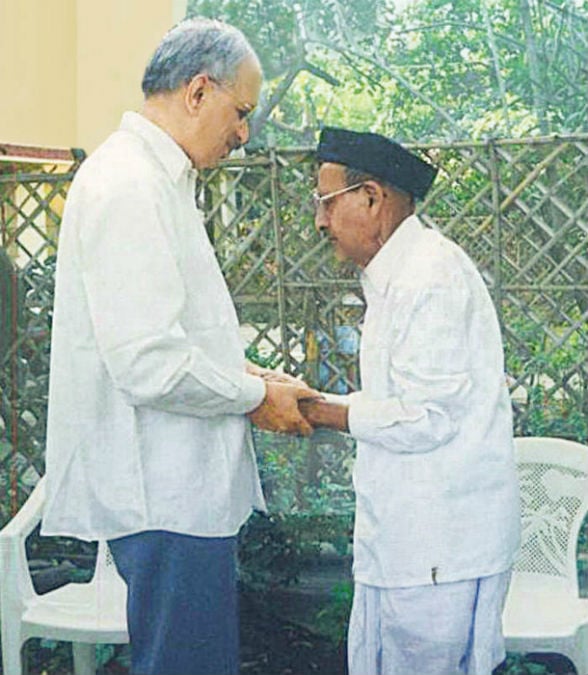 In a prediction made by Him in 2004 Yogatadnya Dadaji has said that ‘H.H. Pande Maharaj will come to the Devad ashram and provide seekers with spiritual remedies for distress’ and that is exactly what happened. 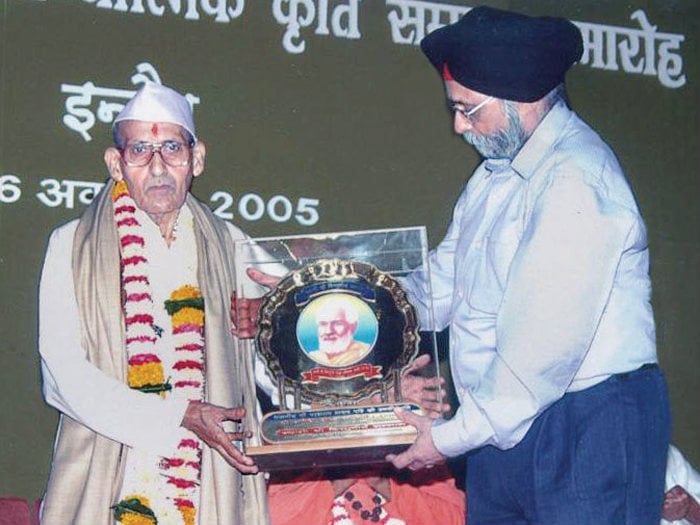 This is the memorable moment when Paratpar Guru Pande Maharaj was honoured with an award for His Holy text ‘Shri Ganesh Adhyatma Darshan’ by Swami Shri Vishnutirtha Shiksha Pratishthan on 16.10.2005 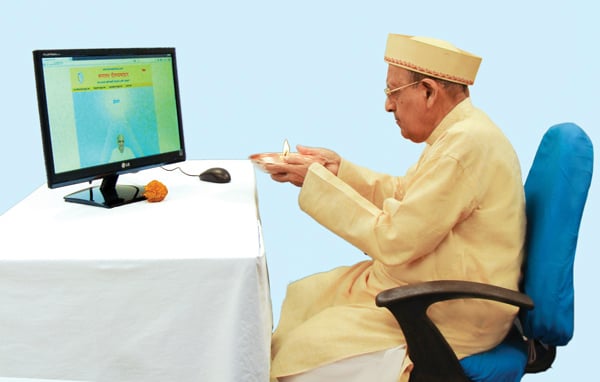 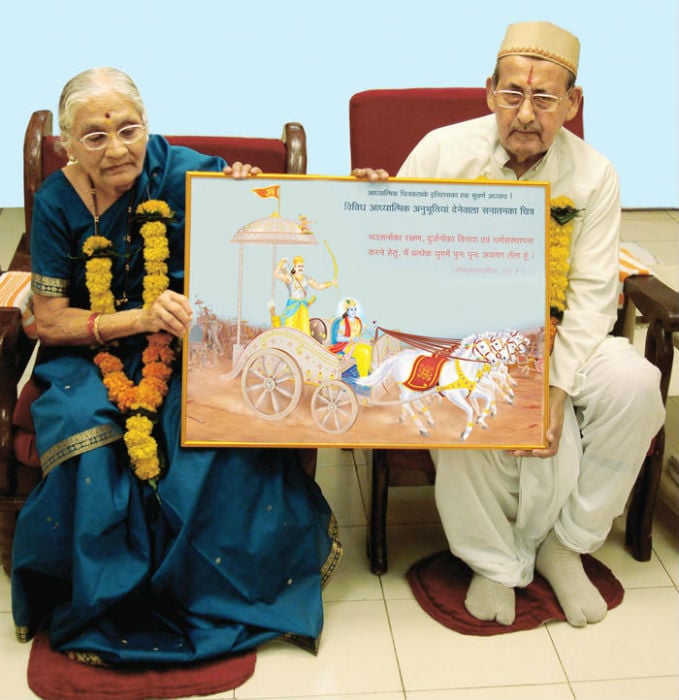 Paratpar Guru Pande Maharaj and Mrs. Asha Pandeaji were felicitated on the occasion of their wedding anniversary at the Devad ashram by gifting with a picture of Shrikrushna and Arjun. (2012) 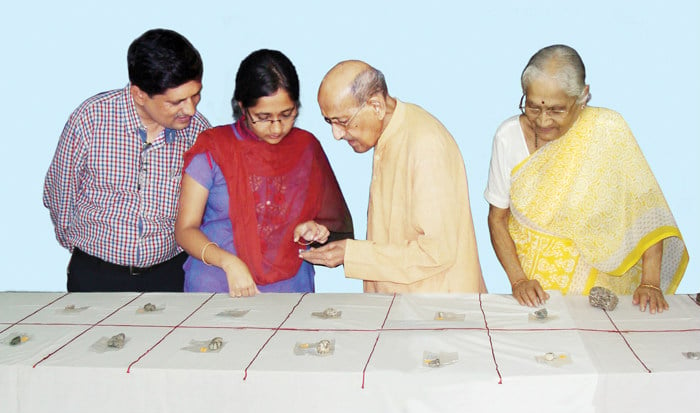 H.H. Baba had collected stones of different shapes and physical characteristics. Seen in the picture is H.H. Baba explaining about them to His granddaughter Gauri and son Amol during their exhibition. Seen beside Him is Mrs. Asha Pandeaji. (2015) 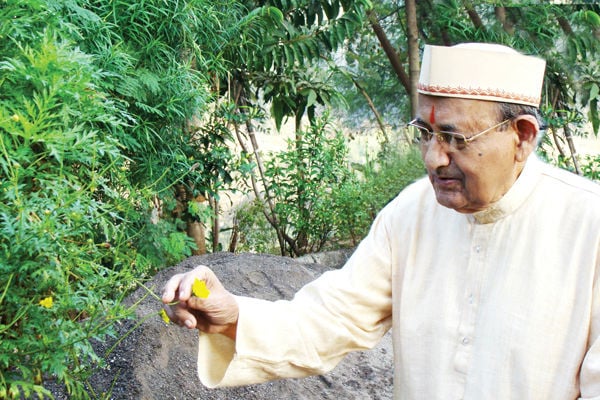 H.H. Baba merging with Nature. H. H. Baba had immense love for Nature just as He had for seekers. After He renounced His body this was observed in the Divine changes which occurred in Nature. 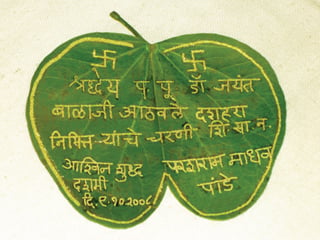 The prasad (Holy gift) that Saints and seekers would receive for Dasra every year was a leaf of the apta (bidi leaf ) tree on which He would write His greetings.This is one of the leaves sent by Him to Paratpar Guru (Dr.) Jayant Athavale. Every year He would send an innovative apta leaf. 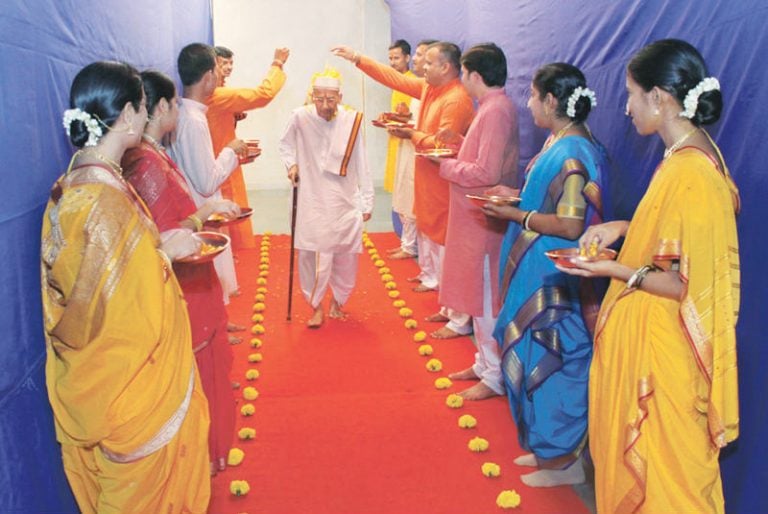 This is that great moment charged with spiritual emotion when seekers showered flowers upon arrival of Paratpar Guru Pande Maharaj at the function held to felicitate Him on His 90th birthday. (2017)

2. A moment evoking spiritual emotion, an example of how after the Guru 3. The room of Paratpar Guru Pande Maharaj, the soul of the Devad ashram 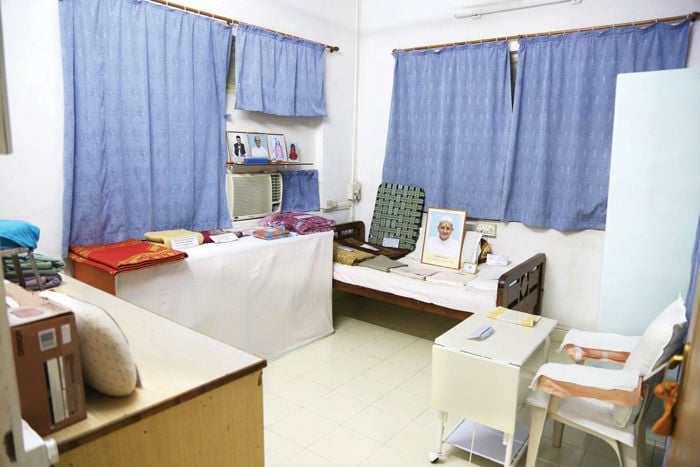 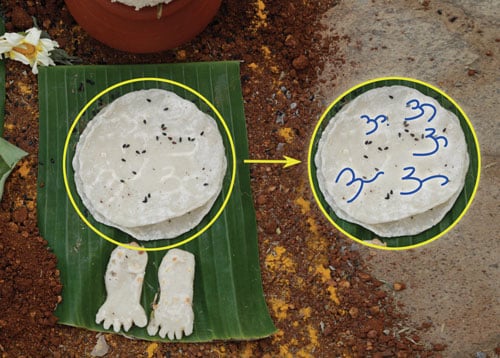 Prasad
Offering made to God and then distributed to devotees
Jiva
Embodied soul
Aukshan
Waving of lit lamps in front of a Deity or a person
Ashram
A place where a seeker can remain engrossed in spiritual practice through spiritual discipline
Arti
A ritual of waving a lit lamp in front of a Deity, accompanied by singing of hymns