A series doing a live presentation of the
Kumbha Mela with news reports : Kumbha Darshan

This special series of articles titled ‘Kumbha Darshan’ has been created to commemorate the Kumbha Mela. Through it we will make an attempt to give our readers its entire spectrum through pictures and special importance This will make our readers understand the extraordinary nature of the Hindu Dharma and the necessity to perform spiritual practice. During the auspicious period of the Kumbha Mela Hindus should make a resolve (sankalp) to undertake spiritual practice because it is this alone which will certainly ferry them across in the upcoming adverse times. 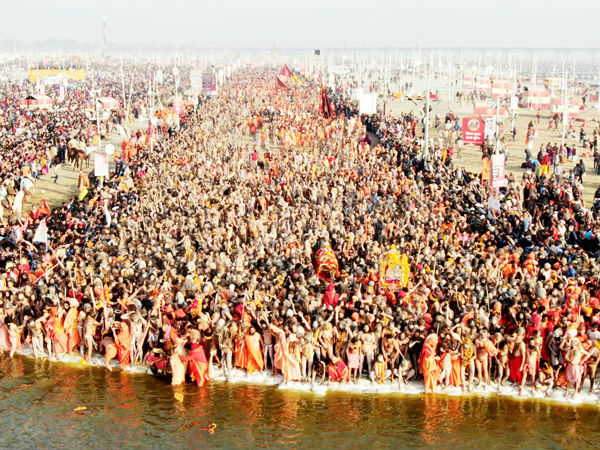 Since the Kumbha Mela is merit endowing if one bathes at Prayag, Haridwar, Ujjain or Trimbakeshwar-Nasik at that time, it endows infinite merit. That is precisely why millions of devotees and ascetics gather there.

A. ‘During the Kumbha Mela different Deities, Matrukas (Divine Mothers), Yakshas (demi-gods), Gandharvas (celestial singers) and Kinnars (celestial musicians) remain active in the atmosphere of the earth. By performing spiritual practice devotees receive blessings from all of them and the target is achieved within a shorter time.

B. The Kumbha Mela occurs in the purview of rivers Ganga, Yamuna, Saraswati, Godavari and Kshipra. Since at that time several Deities, meritorious souls, Sages and inferior messengers are awakened, along with their blessing, assistance is also received from them.

C. During this period accomplishing merit is infinite times more than at other times. The action too is conducive to the karma while the action gets the support of the karma.

D. As during the Kumbha Mela the frequencuies of merit travel all over, man’s mind gets purified and through his thoughts his actions too become fruitful; that is both the action and the karma become pure.’

– A scholar (Writings of Sadguru (Mrs.) Anjali Gadgil are published under the pseudonym of ‘A scholar’)

As bathing in sacred places of pilgrimage cleanses sins many devotees bathe at seats of the Kumbha to achieve this.

During this Kumbha Mela the Ganga remains in Her hidden form in the places of pilgrimage of Prayag (Ganga), Haridwar (Ganga), Ujjain (Kshipra) and Trimbakeshwar-Nasik (Godavari). As during the Kumbha Mela bathing in the Ganga is of spiritual significance  devotees and Saints bathe there.

3A. Reasons for Holy men bathing in the Ganga during the Kumbha Mela

During the Kumbha Mela Holy men bathe in it to cleanse it of the sins of others who have bathed there, with their energy.

3B. Mutual relationship between Seats of the Kumbha and River Ganga

1. Kumbha Melas at Prayag and Haridwar are held on the banks of River Ganga.

3. The Kumbha Mela at Ujjain is held on the banks of River Kshipra. Where this sacred river flowing in the north moves eastwards, in the ancient time it has a confluence with River Ganga.. Today a Shivalinga named Ganeshwar lies there. In the Skanda Puran too River Kshipra is considered as the Ganga.

Thus the history of all seats of the Kumbha is associated with River Ganga.

3C. Due to bathing in the flowing water at the
Kumbha Mela Divine energy flows into the physical body

The Kumbha Parva is associated with astronomy and geology.  Planetary positions during the Kumbha Mela generate energy of science which during the Kumbha mela charges the flowing water. By bathing in the flow of such a river with mere touch of that water Divine Energy starts flowing through your physical body.

The Ganga is meant basically to liberate ancestors. Hence at the Kumbha Mela along with ritualistic bathing in the Ganga Scriptures advise that offerings be made unto deceased ancestors.

Shankaracharyas belonging to different peethas (schools), ascetics from thirteen akhadas, Mahamandaleshwars, Shaiva and Vaishanav sects, scholars, renunciants, and Saints from all over Bharat come together. Thus it assumes the form of a vast Divine congregation of Saints from all over Bharat. For devotees this is the greatest opportunity to enjoy the Holy company of Saints.

Meaning : Darshan (paying respects) to, chanting in or touching the soil of the king of places of pilgrimage, Prayag cleanses man of his sins.

Sankalp
Resolve
Karma
An act that becomes destiny, meaning, leads to a give and take account that has to be settled
Ganga
A Holy Bharatiya river emerging from the crown of Deity Shiva
Dharma
Righteousness