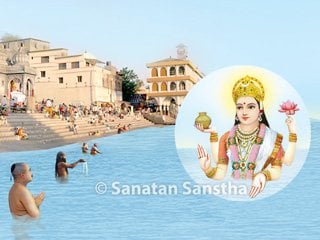 Kumbh Mela is the world’s largest religious fair. It is not only a display of supremacy of the Bharatiya culture, but is also a spiritual congregation that provides satsang. The Kumbh Mela held every 12 years at Prayag, Haridwar, Ujjain and Tryambakeshwar-Nashik on the occasion of the Kumbh Parva has an important place in the Hindu civilization. The spiritual glory and cultural importance of the Kumbh Parva is unique.

Since Jupiter takes 12 years to cross the zodiac, Kumbhayoga (Conjunction of Planets) takes place every 12 years. Three important occasions – ‘Kanyagat’ when Jupiter is in the Virgo sign of the zodiac, ‘Simhastha’ when Jupiter is in Leo sign of the zodiac and ‘Kumbh Mela’ when Jupiter is in Aquarius sign of the zodiac are considered religiously important from the perspective of Hindu Dharma. During these occasions, crores of devotees congregate to perform religious rituals such as bathing in River Ganga, performing spiritual practice, donating, Pitrutarpan, ritual of shraddha, darshan of Saints, debates on Dharma etc. This is a congregation of those who have faith in Dharma. It is a unique occasion when not only devotees, but Deities, Sages, Saints and thirty-three crore tirthas too come to
the Kumbh Parva. ‘Unity of Hindus’ is the main objective of the Kumbh Mela. Religious and cultural immortality of Hindus is experienced through the Kumbh Mela. The Kumbh Mela exhibits the in-depth features of Hindu Dharma to foreigners too.

According to religious scriptures (According to Rugvediya Brahmakarmasamuchhya),Shrivishnu resides at the mouth of the kalash, Rudra (Mahadev) in the throat, Matrukagan (Group of Female Deities) in the middle, Brahma at the bottom and the Earth (that comprises of seven seas and seven Continents) in the centre.
Similarly, Rugveda, Yajurveda, Samveda and Atharveda also reside in the kalash along with their branches.

The Gods and demons came together to acquire the pot of Amruta (Divine nectar) and decided to churn the ocean of milk. The king of serpents, Vasuki, was requested to serve as a rope around the mountain Meru to churn the ocean.
Accordingly Vasuki became the rope and was tied around the mountain Meru. The ocean was churned with the Gods holding the tail of the serpent and the demons, the mouth.

During the churning, fourteen unique items emerged from the ocean – Poison, Kamdhenu (A wish-fulfi lling cow), Uchhaihashrava (A white horse), Airavat (An elephant with four tusks), Koustubha mani (A diamond), Parijat Kalpavruksha (A wishfulfilling tree), Devanganas (Celestial maidens) such as Rambha etc., Shri Lakshmidevi (Consort of Shrivishnu), Sura (Alcohol), Som (Moon), Haridhanu (A Divine bow), a conch, Dhanvantari (The Doctor of Deities) and Amrutkalash (Pot of Amrut). When Deity Dhanvantari emerged from the ocean holding
the Amrutakumbha, the Gods thought that if the demons became immortal upon drinking Amruta, they will create havoc in the world. They signalled Indra’s son, Jayant, who instantly took the Amrutakumbha from Deity Dhanvantari and ran in the direction of Heaven. To get hold of the Amrutakumbha, Gods and demons fought each other for 12 days and 12 nights, which are 12 years for the human. During the battle, the Amrutakumbha was kept down 12 times. Suryadev protected it and the moon took care that the Amruta does not evaporate. The planet Guru fought the demons and protected the pot. The 12 places where the drops of Amruta fell from the pot are considered to be the Kumbha Parva places as per the special position of the above mentioned planets. Of these 12 places 8 are in other lokas (Regions) and 4 on earth – Prayag (Allahabad), Hardwar (Haridwar), Ujjain and Tryambakeshwar- Nashik – are included in these 12 places. At these places, the Kumbha Parva is celebrated when the position of the planets and the tithi on which the Amruta drops fell on earth is the same. The Amrutkalash is also remembered during the Kumbh Parva.

Reference : Glory of the Kumbha Parva