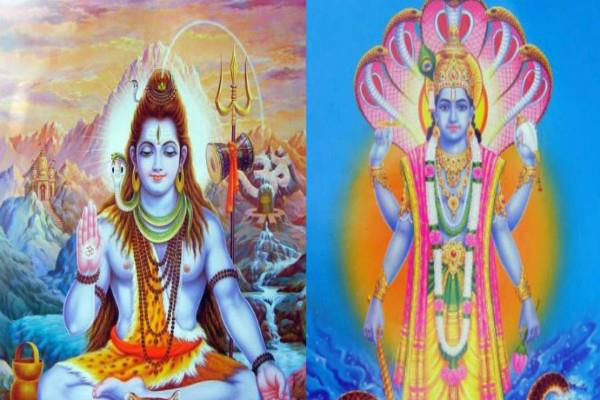 Temples of different Deities were built all over the world. Every seeker began praising his Deity of worship and sect and began spreading it. However in the process he began to look down upon seekers of other sects because of which animosity developed between Shaivas (devotees of Shiva) and Vaishnavs (devotees of Vishnu). Several Holy texts were compiled to wipe out these differences.

The Kalbhairav Varad stotra mentions the oneness of these Deities –

At times these differences led to riots. It was at this juncture that Jagadguru Shri Shankaracharya commenced the system of worshipping a family of five Deiites (panchayatan) and wiped out these differences and tried to create unity. Several such attempts were made by ancient Sages.

As is known that sanskars (subconscious impressions) lead to creation of virtues and decrease in defects, despite several invasions on the Sanatan Hindu culture it has still survived. This culture has studied lifestyles and made progress in the spheres of politics, Dharma, society and science. ‘Vaikunth Chaturdashi’ is one such great experiment arising from this.

Kartik Shuddha Chaturdashi is known as Vaikunth Chaturdashi and Pournima as Tripurari Pournima. These vowed religious observances (vrats) are more or less paired. Vishnu and Shiva are two different forms of the same Supreme Soul (Paramatma) created to perform different missions. It is sheer ignorance on our part which is causing us to view Them as different Deities and leading to sectarian differences.To alleviate this difference of opinion and to depict oneness between Vishnu and Shiva the above remedies have been devised by the Scriptures.The almanac (panchang) has recommended a fast for Vaikunth Chaturdashi, worship of Deity Vishnu beneath an amla/avli tree and ritualistic worship (puja) of Vishnu at midnight followed by that of Shiva at sunrise. Many perform the Vaikunth Chaturdashi vowed observance. The lamp to Vaikunth (abode of Shri Vishnu) is lit and at night the happiness of meeting both Hari and Har is experienced.

At the Trivikram temple on Vaikunth Chaturdashi it is customary to offer tulsi (Holy basil) to Deity Shankar and bel (aegle marmelos) to Deity Vishnu. During the reign of Saint Narahari there were no conflicts between the Shaivas and Vaishnavs. It is there itself that Deity
Pandurang brought about a vision of the linga (Divine phallus), a symbol of Deity Shiva. On this linga Jagadguru Shri Shankaracharya wrote the Shri Pandurangashtakam stotra. Thatform of Shri Vishnu in the incarntion of Vaman which manifested before King Bali is famous as Shri Trivikram. Shri Trivikram adorns the linga on His head.

The historical town of Kalyan has a temple of Shri Trivikram which celebrates Vaikunth Chaturdashi with great fervour. This temple dates back to the Peshwa regime and the idol here was brought by Shrimant Balwantrao Mehandale serving the Peshwas, during his Gujarat campaign, in the 18 th century. The idol has been sculpted from gandaki (a type of marbale) marble and has an aura around itself. On either side of this aura are engraved the ten incarnations of Deity Vishnu along with Jai-Vijay the gatekeepers of Vaikunth and Rai-Rakhumai (Divine Energies of Vishnu). The idol has four arms adorning a lotus, discus, conch. Also as per tradition it adorns a linga on the head. As this idol is a union of Shibva and Vishnu devotees of all Deities get a simultaneous vision of them.