5.1 How is the ritual of Kumarika pujan performed?

5.2 Significance and science underlying the worship of kumarika

6. Offering Naivedya (consecrated food) to the Goddess all the nine days

7.1 What is the significance of playing ‘Garba’?

7.2 While playingGarba should one use a rhythm of two claps or three claps?

8. Performing the Lalita Pujan on the fifth day of Navratri

9. On the eighth day of Navratri, an idol of Goddess in standing posture is worshipped

10. Worship of Goddess Saraswati during Navratri (8th and 9th night)

Taking a pitcher made of mud or copper, filling it with soil and sowing seven types of grains in it. Please read Sanatan’s Publication for details. 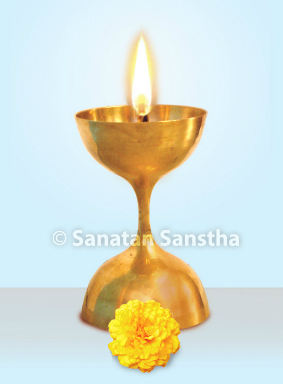 Akhand means continuous and deep is an oil lamp; Akhand deep is a continuously burning lamp. An oil lamp symbolises absolute Fire principle. During Navratri the atmosphere is charged with a glow that is laden with absolute Fire principle. The frequencies emanating from this glow get attracted towards the flame of the Akhand deep resulting in their constant movement in the house. Hence it is important to light an Akhand deep during Navratri.

A. Process of inviting the
Goddess and establishing Her ritualistically

The first step in the worship of Goddess during Navratri is inviting Her and establishing Her ritualistically. Due to the resolve in the invitation the energy waves remain activated for a longer time at the site of worship.

B. Ritualistic establishment of the Goddess Ashtabhuja

Goddess Ashtabhuja is the destroyer form of Shakti (Energy principle). Navratri symbolises the actual existence of the primal Shakti which is absolute Fire principle laden. The weapons in the hands of the Goddess Ashtabhuja symbolise the pro-activeness of Her destroyer form. These weapons laden with the destroyer principle act as eight guardians of the eight directions. With the help of the absolute Fire principle they protect the Universe by putting a check on movements of the raja-tama frequencies by blocking their activities.

The Navarnav yantra symbolises the ascending of the Goddess on Her throne established on the Earth. There is confluence and solidification of the destroyer frequencies of the nine forms of Goddess in the Navarnav yantra. Hence, this throne symbolises the presence of the attributeless form of Goddess. The ‘with attribute’ form of the Goddess that appears into the active motion of the Universe from this yantra is believed to symbolise the practical action oriented principle. 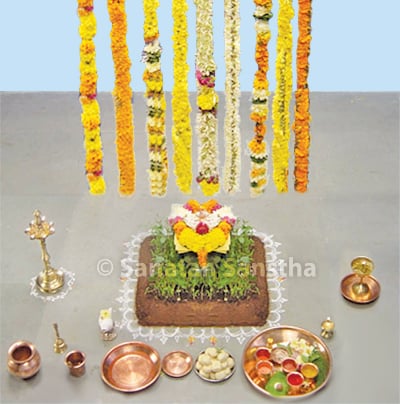 Hanging garlands over the idol of the Goddess. Due to the colours and fragrance particles of the flowers, the energy frequencies of absolute Fire principle from the atmosphere get attracted towards these flowers and thereby move quickly to the idol and assists the activation of Goddess principle in the idol in less time. This Divine principle is transmitted to the house and thus helps in its purification. The embodied souls residing in the house also benefit from this. – (Pujya) Mrs. Anjali Gadgil 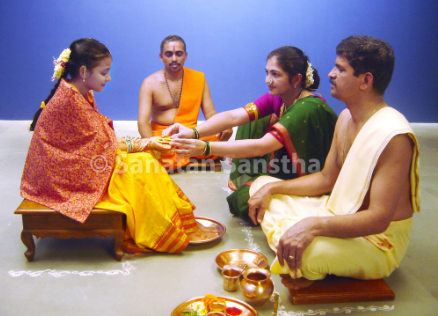 5.1 How is the ritual of Kumarika pujan performed?

A. During each of the nine days of Navratri, respectfully invite a kumarika (a young virgin) to your house. If this is not possible, the custom is to invite nine kumarikas on any one of the days in Navratri.

B. Offer them a mat made of wool to sit on.

C. Perform their padyapuja (Ritualistic worshipping of their feet) with a bhav (spiritual emotion) that the Goddess principle in them is activated.

D. Offer them a meal of their liking on a banana leaf. It is believed that the Goddess likes kheer (a sweet made of milk and rice) and puris (type of fried Indian bread).

E. There is a custom of offering all kumarikas new clothes, consider them to be representative of Shakti and pay obeisance with utmost bhav.

5.2 Significance and science
underlying the worship of kumarika

A kumarika symbolises Shakti in unmanifest form. Worshipping a kumarika activates the Shakti present in her and helps attract the absolute Fire principle frequencies from the Universe. Later, this principle is transmitted very easily to the atmosphere through the medium of the kumarika in the form of frequencies carrying chaitanya (Divine consciousness) and benefit the people. To accumulate the frequencies of the Goddess principle active during Navartri, the kumarika is worshipped with utmost bhav and efforts are made to appease her as she is considered as the manifest form of the Goddess’ principle. The degree of manifestation of impressions on subconscious mind of the kumarika is less too and this helps in deriving maximum benefit of the ‘with attribute’ form of the Goddess; hence the importance of kumarika pujan during Navratri.

6. Offering Naivedya (consecrated
food) to the Goddess all the nine days

During Navratri prepare sattvik dishes for the Goddess, as is customary. Apart from the regular food items include puran (a sweet made of gram and jaggery) and varan (an item made of toor-dal) in the meal. The Naivedya which includes puran and varan, radiates activated raja component and the energy laden absolute Fire element frequencies from the Universe get attracted to it in less time. When one consumes the Naivedya as prasad, he benefits from the energy frequencies which are absolute Fire element oriented and thereby purification of his gross and subtle bodies takes place. – (Pujya) Mrs. Anjali Gadgil 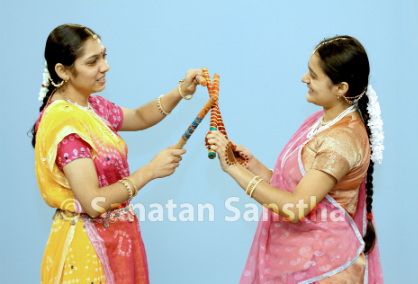 7.1 What is the significance of playing ‘Garba’?

In Hindu Dharma, playing ‘Garba’ implies singing devotional songs showering praises on the Goddess, accompanied by rhythmic clapping. ‘Garba’ awakens the Goddess from her meditation and is a prayer unto Her to assume Her destroyer form for the benefit of the Universe.

7.2 While playing the Garba should
one use a rhythm of two claps or three claps?

The destroyer principle of Goddess Durga is activated gradually, in stages during Navratri. Brahma, Vishnu and Shiva are the three main levels of the Supreme God. To activate the destroyer principle of the Goddess on all the three levels, devotees clap thrice and activate the will of the Goddess. Hence it is more beneficial to play ‘Garba’ with a rhythm of three claps. The three claps symbolise the following :

1. The first clap is related to Brahma principle, meaning energy of desire . Because of the first clap, the desire frequencies from the Universe are activated and they back the wishes of embodied soul depending on his bhav.

2. Through the medium of second clap, the action frequencies that are Vishnu principle oriented impart energy to the embodied soul to actually perform the actions.

3. Through the medium of the third clap, the knowledge frequencies actually make the task happen and give the embodied soul the desired fruit.

Impact of the claps generates absolute Fire principle and this makes it possible to awaken the destroyer principle of the Goddess. Clapping indicates the worship of the absolute Fire element. Singing devotional songs that appeal to the Goddess principle, supported by rhythmic clapping and moving on a circular path helps awaken bhav towards the Goddess.

8. Performing the Lalita
Pujan on the fifth day of Navratri

A fragrance that is Shakti oriented is called Lalita. The manomaya kosh (mental sheath) of the devotee is purified by the fragrance present in the Universe on the fifth day of Navratri. – (Pujya) Mrs. Anjali Gadgil

9. On the eighth day of Navratri, an idol of
Goddess in standing posture is worshipped

The all accommodating destroyer waves of Shri Durgadevi present in vast measure on the eighth day of Navratri are imbibed in the face mask made of rice flour and that benefits the devotees. Celebrating Navratri is worshipping the destroyer form of primal Shakti. During Navratri, the intensity of destroyer principle of Shri Durgadevi increases gradually. On the eighth day, the proportion of red colour absolute Fire element frequencies amongst the destroyer waves of the Shri Durgadevi is higher. These waves are related to the absolute Air and Ether elements. Hence, the idol prepared on Ashtami (with a face mask made of rice flour) is draped in a red saree. Rice has the quality of being all accommodating and responds with equal intensity to the ‘with attribute’ frequencies as well as attributeless frequencies. This quality attracts the frequencies dominant with absolute Fire principle. – (Pujya) Mrs. Anjali Gadgil

10. Worship of Goddess Saraswati
during Navratri (8th and 9th night) 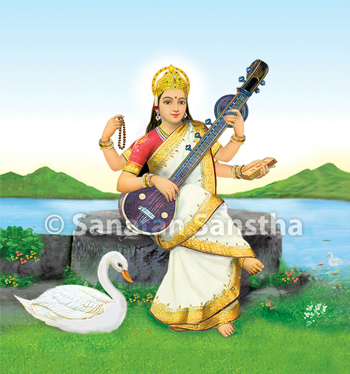 On the previous day of Vijayadashami i.e. 9th day, Goddess Saraswati should be worshipped through the mediums associated with Her origin. But on the day of Vijayadashami the Saraswati principle becomes active in a larger proportion, adopts a ‘with attribute’ existence and then dissolves to a dormant state. So it is desirable that Goddess Saraswati be worsh-ipped on that day prominently.

Thus on Vijayadashami, first the rite of Her worship and then that of immersion are carried out ceremoniously. From the Ashthami (8th day) to Vijayadashami (10th day) the Energy form of Goddess is adorned with all Her knowledge-filled genius. When Goddess Saraswati’s saviour frequencies touch the devotee, his soul-energy is instantly activated and is transformed into a flow of genius. As he is linked with the knowledge-facet of the Goddess, he gets a spiritual experience of bliss.

1 thought on “How to worship the Goddess during Navratri ?”