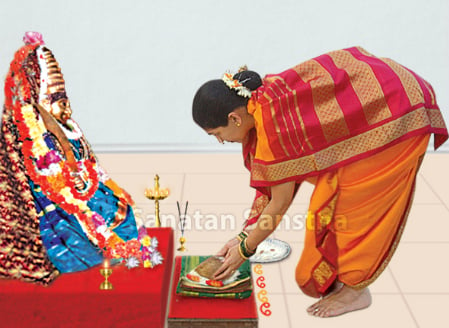 ‘Oti bharane’ – Offering a sari and a blouse-piece to Godess

1. What is the importance of
performing ‘Oti bharane’ in Goddess worship ?

Invariably offering Her a sari and a blouse-piece concludes the ritualistic worship of a Goddess. Offering this to a Goddess is akin to praying to Her attributeless form to work for one’s spiritual progress and welfare through the medium of ‘with attribute’ form. Panchopachar puja (worship by 5 characteristic sub-rituals) in any ritualistic worship is related to the attributeless form of God. The prayer to the Goddess to become functional, with the offering of a sari and a blouse piece helps the attributeless form of the Goddess to manifest in ‘with attribute’ form in the sari and the blouse-piece.

Note : Ritual of ‘offering a sari and a blouse-piece’ is called as ‘Oti bharane’.

2. The correct method of
‘Oti bharane’ while worshipping a Goddess 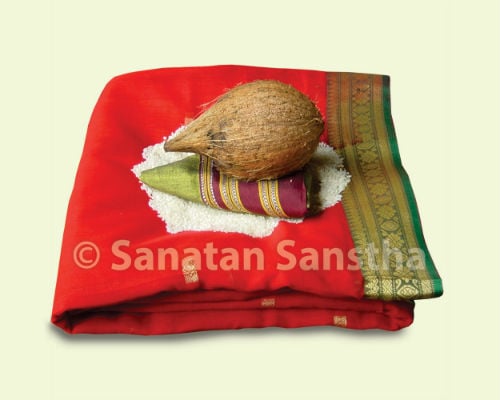 A. The sari offered to the Goddess should preferably be made of cotton or silk fabric, because when compared to other fabrics, these fabrics have a better capacity to attract and retain the sattvik frequencies emanating from the Goddess.

B. Stand in front of the Goddess holding the sari with open palms, at chest level; place the blouse-piece on top of the sari and then a coconut and some rice grains over the blouse piece. The tuft at one end of the coconut should be towards the Goddess.

C. Pray with utmost bhav (spiritual emotion) to the Goddess to bless you with chaitanya and for your spiritual progress. This helps manifest the ‘with attribute’ Goddess principle.

D. After offering all the ingredients of ‘Oti’ at the feet of the Goddess, offer some rice grains on them.

E. If possible, the lady offering the ‘Oti’ (only a married lady is permitted to offer an ‘Oti’ to a Goddess) should wear the sari offered to the Goddess as prasad (holy sacrament) and partake of the coconut too as prasad.

3. The process in performing the
ritual of ‘Oti bharane’ and its merits

B. Through the cloth, with the help of absolute Earth element, frequencies with sattva attribute get transmitted. These frequencies along with the help of absolute Water element present in coconut water, gain momentum and become functional. As a result a protective sheath of these frequencies is formed around the body of the embodied soul performing the worship. Similarly, the sattvik waves which permeate the sari and the blouse-piece help in purifying the prandeha (vital body) & the pranmayakosh (vital sheath) of the embodied soul.

4. What is the benefit in
specific colour selection of the sari
and blouse-piece offered to the Goddess?

5. Why is it beneficial to offer, a nine yard
sari instead of a five yard one to a Goddess ?

When an embodied soul with bhav towards a Goddess, doing spiritual practice according to the Path of Guru’s Grace offers oti the colour of the sari does not matter because anyway she derives the expected benefit because of her high level of bhav. However seekers at the primary level or those doing spiritual practice according to the Path of Action should perform each and every ritual according to the prescribed scriptural rules. Hence they should offer a nine yard sari to the Goddess instead of a five yard one. Offering a nine yard sari to a Goddess represents the functioning of the Goddess through Her nine forms, as per the requirement of the devotee. The number ‘nine’ represents the nine main forms or incarnations of Shri Durgadevi. The nine yards (levels) of the sari represent Her nine incarnations carrying out Her mission. Offering a nine yard sari thus implies invoking the basic unmanifest Divine Energy which encompasses all the manifest forms of the Goddess, that is Shri Durgadevi, to manifest in all Her nine forms to perform the required mission. – (Pujya) Mrs. Anjali Gadgil

6. Why is the khann offered
to a Goddess folded as a triangle?

4 thoughts on “What is the importance of ‘offering a sari’ to the Goddess?”