1. Spiritually correct way of performing rituals in the worship of the Goddess

2.1 What is the correct method of saying Arti of Goddess ?

2.2 Which musical instruments should be played during the Arti?

2.3 Should a lamp with a single wick (‘ekarti’) or lamp with five wicks (‘pancharti’) be used for Arti?

2.4 What is the correct method of performing Arti?

3. Worship of the Goddess on Gauri tritiya

4. Worship of the Goddess on Haratalika

1. Spiritually correct way of
performing rituals in the worship of the Goddess

Every Deity has a peculiar spiritual method of worship. There is a definite science behind performing every ritual in a peculiar way when worshipping a particular Devta. The following table gives information about some common rituals in the worship of the ‘Primal energy’ that is Shri Durgadevi and Her different forms.

2. Performing Arti of a Goddess 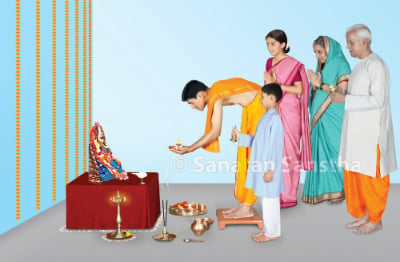 Performing Arti of a Goddess

2.1 What is the correct method of saying Arti of Goddess ?

The Goddess principle, that is the Divine energy principle is a confluence of the saviour and destroyer forms of Energy. Hence it is only appropriate that the Arti hymns be sung in a low pitch, at a medium pace and earnestly, with intense bhav.

2.2 Which musical instruments should be played during the Arti ?

Playing of musical instruments such as the bell, cymbals, harmonium and the Bharatiya drum (tabla) facilitates enhancement of bhav and effectiveness of the Arti. The ritualistic bell should be rung melodiously and consistency in its rhythm should be maintained. Rhythmic accompaniment of the other musical instruments should also be included.

2.3 Should a lamp with a single wick (‘ekarti’)
or lamp with five wicks (‘pancharti’) be used for Arti?

This entirely depends on the bhav and spiritual level of the devotee performing the Arti.

A) Performing pancharti : The five wicks of a pancharti symbolise the principle of multiplicity, that is the ever-changing Great Illusion. If the devotee performing Arti is a preliminary stage seeker (with spiritual level less than 50%), who has just commenced spiritual practice then he should use the five wick Arti .

B) Performing ekarti : One wick of the ekarti symbolises the principle of singularity. The devotee with substantial bhav and a spiritual level above 50% should use the one wick Arti, that is ekarti. 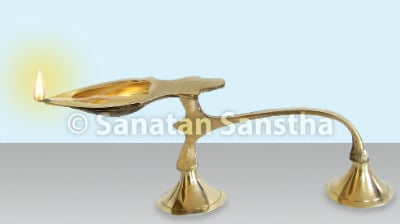 C) Performing Arti with the atmajyoti : A highly evolved devotee with a spiritual level of more than 70% and who has already entered a stage of unmanifest bhav, gets a vision of the Goddess with His atmajyoti. Using this to perform Arti indicates steadiness of emotion in the principle of singularity.

2.4 What is the correct method of performing Arti ?

When performing the Arti of a Goddess move the lit lamp around the Devta in a complete circular manner in the clockwise direction – (Pujya) Mrs. Anjali Gadgil

3. Worship of the Goddess on Gauri tritiya

A) ‘Chaitra Gauri’ celebrations commence from the day of Gudhi Padva (first day of the Hindu lunar month of Chaitra). On this day chaitanya in the form of the absolute air element flows from the universe towards the earth. During the period from Gudhi Padva to Gauri tritiya (third day of Chaitra) the generation of Brahma’s primal energy flow that is in its teens takes place. The flow is attributeless and is active in respective time cycle. This period is the most Blissful because the Divine energy principle that rides the absolute air element principle is active in the entire universe. The invocation of Goddess Gauri on Gudhi Padva enables purification of the subconscious mind. As a result all the tasks performed by the worshipper during the subsequent year are without body awareness. Because of this these tasks turn out to be more effective and fruitful. Without body awareness means performing these tasks under the firm influence of the impression on subconscious mind that, ‘the one doing the tasks is not the cage of flesh and bones meaning the physical body but the chaitanya within it’.

B) The Energy principle generated from the flow of the absolute air element after invoking Goddess Gauri on Gudhi Padva becomes radiant on day of Gauri tritiya. This aura of its radiance spreads all over the universe and is described as the ‘Brilliance of the Energy principle’. This is the phase where the Energy principle enters the stage of teens. This implies that from Gudhi Padva the attributeless form of the Primal energy begins to assume a form ‘with attributes’ with the help of the radiance and attains an optimal level on the third day.

Benefits derived by worshipping the Goddess on Gauri tritiya

4. Worship of the Goddess on Haratalika

‘On Hartalika (third day of the Hindu lunar month of Bhadrapad) the Energy principle manifests in the universe in the form of flow of absolute fire element particles and under the influence of God Shiva. Due to the combined energies of Shiva and Divine energy there is accumulation of the Energy of action at respective levels in the body of the woman who worships the Goddess.

Arti
A ritual of waving a lit lamp in front of a Deity, accompanied by singing of hymns