An alarming loss to Hindu Dharma and culture due to malpractices in the Navratri festival !

O Hindus ! Public celebration of Hindu festivals is becoming perverted. Without considering the religious, spiritual and social causes underlying the celebration of festivals, majority of people view it as a mere reason of fun and frolic. An excellent example of this is that, during the Navratri festival there are advertisements of Garba dance classes on one side and on the other there are news of arguments over court orders on Noise Pollution. But, nowhere there is mention of the Goddess for whose grace the festival is celebrated. In Scriptures, religious festival is described as ‘That celebration from which one derives Bliss (Anand)’. But in the present scenario ‘worldly happiness (not bliss) derived by making others unhappy’ is called a festival. That is precisely why, except for people belonging to a certain age group the average individual is heard expressing ‘We want peace not celebration’.

After Ganesh Chaturthi now in the Navratri festival too, a lot of malpractices are observed – extortion of donations, noise pollution, doing Garba on the tune of film songs, vulgar dance performed in an inebriated state, an upsurge of unwed mothers within a few months after Navratri etc. The misconduct occurring at the Navratri festival every year is a frightening alarm to the immense loss it is causing to Hindu Dharma and culture ! Hence, we are publishing this article to awaken Hindus, to caution them against such dangers and to encourage them to protect Hindu Dharma and our culture.

2. Spiritual significance and origin of the term ‘Garba’

In Gujarat, a lit lamp placed in an earthen pot with many openings in it, representing the maternal energy, is worshipped. The ‘deep-garbha’ (deep means lamp and garbha means womb) is worshipped for nine days symbolising the reproductivity of a woman. Eventually, the use of the deep word reduced, retaining only the term garbha-garbho-garbo, which is now prevalent as ‘Garba’.

In earlier times on the first day of Navratri, earthen pots with small holes were kept on top of one-another, near the Goddess. A lamp with four wicks would be lighted and placed in the topmost earthen pot. Care would be taken that the lamp remained lit continuously during the nine days. People would dance in circles around this lamp. In Garba, there were two types of folk dances – the one performed by men standing in a circle amidst singing of folk songs and clapping was called as Garbi and the dance performed by women with delicate steps was called ‘Garba’. The songs glorifying Goddesses Amba, Kalika, Randal etc were sung. Musical instruments generating a warrior rhythm such as the nagada, clarion (shehnai), were used. With passage of time, people began to dance to the tunes of music composed on the Divine play of Deity Krushna (Krushnaleela), compositions of Saints, description of the seasons or on social issues. Clapping and snapping of fingers were replaced by sounds of the khanjir (tambourine), manjira, lamps etc. 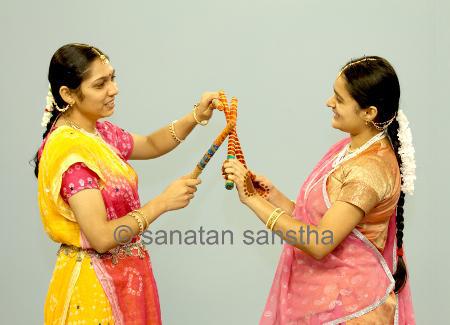 A resident of Kolhapur, Mr Nyas who has been organising Garba programmes for the past 55 years says, ‘The Goddess annihilated evildoers and protected us. We cannot repay this debt, but to entertain and please Her this dance is performed. This dance is a kind of worship akin to kirtan (discourses glorifying God with music and stories) and bhajans (devotional songs) performed to please Her.’ The priest of the Radhakrushna temple in Kolhapur Mr Bapu Shukla says, ‘The sticks (dandiya) used in the Garba dance symbolise the saw toothed sword in one hand of the Goddess’. They are used to convey the message to the Goddess that we are worshipping Her. In fact the Dandiya dance should be performed harbouring the spiritual emotion of a warrior and the dandiyas should be wielded like a sword and during its performance songs glorifying the Goddess should be sung. The ‘disco Dandiya’ dance performed today is a perverted version of the Dandiya dance’.

5. Modern Garba and Dandiya dances are distorting the objective underlying the traditional Garba

5A. Not as per Scriptures

When performing the Garba dance the body should move in a particular rhythm. But nowadays people dance with weird bodily gestures. Increasing mischief while performing such dances is leading to colliding with others, intentionally touching others etc. In the Dandiya dance, the dandiya should be gently touched to the dandiya of the other individual, but today they are struck forcefully.

Nowadays due to sexual attraction, young men and women perceive Garba as an opportunity to increase closeness with each other. This increases immorality. Even after the Garba dance is over, young boys and girls are seen loitering on the roads instead of going back to their home. From information received from several Police officers these youth who remain outdoors on the pretext of Garba, drink alcohol and roam all night creating chaos on the streets. From news published in a Gujarati daily, in Mumbai and Gujarat it was observed that there is an increase in the number of medical termination of pregnancies by unwed girls within few months after the Navratri festival.

On the pretext of Garba in some areas and housing complexes, flat owners are forced to give donations based on the size of the flat they own. For example, once in the Vapi District of Gujarat, in a well-known housing complex,  Rs 1500 were collected from the owners of 3 BHK flat while Rs 1000 were collected from owners of 2 BHK. The entry fee to a disco Dandiya dance ranges from Rs 100 to 1000 per person. In big cities like Mumbai famous filmstars are invited to the Garba dance and the entry fee is hiked. Through this medium the organisers income goes up to 25 to 30 crores. People earning money through unrighteous ways, view Garba as a means of amassing wealth.

At some programs of ‘Garba, Dandiya or disco Dandiya’ there is a lucky draw for participants who purchase tickets worth thousand rupees and the winner is given gifts of 5000 to 10000 rupees. Taking advantage of the mentality of society to become rich fast, organisers of the Garba make their money. Many organizers take advantage of garba and dandiya dance lovers and attract them by keeping grand prizes like four-wheelers. This is indirectly encouraging gambling.

This perverted form of Garba is engulfing Hindu Dharma. This misconduct during Navratri festival, is trying to destroy Hindu customs, traditions and culture. However the lawmakers, our politicians instead of curbing these practices are turning a blind eye so as to be able to retain their positions and on the contrary are encouraging it. All rules pertaining to pollution, morality are broken during this period. Infact illegal businesses thrive during this period. Despite this being known by many, politicians ignore this and then the judiciary has to intervene.

6. What are we gaining from modern Garba ?

The present day’s modern Garba is in a pitiable state. One might ponder, what we are really achieving from it.

6A. No benefit of the Deity Principle

The main motive behind Garba is to worship the Goddess and to receive Her blessings. However due to the malpractices that have crept in, the aim underlying celebration of festivals is certainly not fulfilled.

6B. Increase in the Tama component

Looting of devotees on the pretext of Garba, immorality and vulgar dancing etc is resulting in loss of sanctity of the festival, and tremendous increase in the Tama component.

We have a golden opportunity to do sanskars (subconscious impressions) of devoutness and Nationalism on the children through celebration of festivals. But through the modern Garba dance of today we cannot create sanskars on children, on the contrary negative sanskars are done on them.

The purpose of presenting the present scenario of the Navratri festival is to create awareness about its pitiable state and so that you make some efforts to stop the degradation. Remember you too are a part of this society. If you do not do anything to stop this then you too may be a contributor in the sin accrued from it. Performing religious actions means following Dharma and making efforts to create religious awareness too will be observance of Dharma in the current period. Hence today every individual needs to make effort towards ideal celebration of festivals.

Today there are only a couple of committees that celebrate the festival by learning about the underlying science. The main objective of celebrating religious festivals is to incite the religious attitude of the public and to nurture it. But today, the public celebration of festivals is being done to derive worldly pleasures and with commercial attitude, which is not beneficial from the spiritual viewpoint. Hence we wish to convey to these committees and their volunteers that you can change this form of the festival and to achieve that you may undertake the actions enumerated below.

A. Prevent the malpractices mentioned above.

B. Maintain discipline and sanctity at the venue of ritualistic worship (puja) and in the celebration hall.

C. Public celebration of festival serves in uniting society to a great extent. Bearing this in mind you may function at the level of social service, protection of the Nation and creating awareness about Dharma. To achieve this, you can organize discourses on Dharma, Spirituality, spiritual practice (sadhana) etc. or launch social awareness campaigns on ‘alcohol’, ‘AIDS’ etc.; organizing lectures on corruption, creating awareness about the ills of casteism etc. A panel of experts from various spheres can be invited for group discussions on topics related to social welfare.

D. Utilise the donations for spread of Spirituality and for the welfare of Dharma, society and Nation. Giving education scholarships to needy children, assisting orphanages, old age homes and physically challenged people, creating libraries etc can be achieved from these funds.

9. An appeal to devotees who are vigilant

O vigilant devotees, you can help in eliminating malpractices at the Garba festival in the following ways.

A. File police complaint against extortion of donation and write a letter on the malpractices to the Police !

B. In case of noise pollution, register a complaint to the Police on phone. You need not reveal your identity.

C. If you see people gambling or drinking in the hall of the Garba festival then make a telephonic complaint to the Police. There is no need of submitting proofs.

D. Unite people with religious ideology, and appeal to Government and Police to make use of their privileges for stopping the malpractices in the festival.

For the past 5 years, Sanatan Sanstha is running the ‘Social awareness campaign for ideal public celebration of Navratri’ so as to eradicate the malpractices creeping in the Navratri festival and to celebrate it ideally. During Navratri, discourses are organized at various places to guide the people. Awareness is also created through the medium of pamphlets and posters. Memorandums are submitted to the Government in order to take necessary action for the prevention of malpractices. Like-minded organisations and vigilant citizens can also participate in Sanatan Sanstha’s campaigns.

O brethren, create awareness about Dharma at individual level or participate in the campaigns of Sanatan Sanstha, so that you can receive the blessings of the Goddess. Remember, that even a small action performed by you for the sake of Dharma can serve as an inspiration or others.