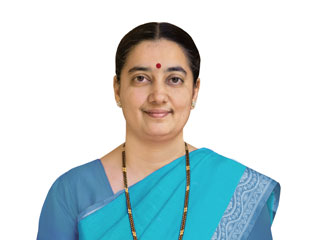 That part referred to as Lanka or Lankapuri in the Holy Ramayan is the country of Srilanka of today. In the Tretayug Shrimahavishnu assumed the incarnation of Shrirama and travelling to Lankapuri annihilated demons such as Ravan. Now 70% population there is Buddhist. Yet there are several spots here linked with Shrirama, Sita and Lakshman. In fact there is evidence here to prove what Maharshi Valmiki wrote in the Valmiki Ramayan. Srilanka has a number of places, places of pilgrimage, caves, mountains and temples associated with Shrirama, Sita, Hanumant, Lakshman. Ravan and Mandodari. On behalf of Maharshi Vishwavidyalay Sadguru (Mrs.) Anjali Gagil along with four student seekers toured Srilanka for a month to be able to procure information on all these seats of worship to give to Hindus all over the world, so it was like a study tour connected with the Ramayan.

‘The island of Srilanka is an inseparable part of Bharat even before Shrirama set foot on it. Bharat in the Treta or Dwapar yug included today’s geographical Bharat, Nepal, Pakistan, Bangladesh, Srilanka and Tibet.

In Satyayug Bhagwan when Shiva performed the tandav dance lifting the corpse of His energy, ‘Shatidevi’ the activity of the entire world came to a standstill. To pacify Bhagwan Shiva the Deities approached Bhagwan Vishnu. When Bhagwan Vishnu released His discus (sudarshan chakra) the body of Deity Sati was cut into 51 pieces which fell on the earth. Then Deity Shiva became calm. The spots where parts of the body of Deity Sati fell are known as Shaktipeethas. Out of the 51, 42 are in Bharat, 4 in Bangladesh, 2 in Nepal, 1 in Srilanka (Nainativu), 1 in China (Manas) and 1 in Pakistan (Hingulajamata). The bells from the anklets on the feet of Deity Sati fell on the island of Nainativu in North Srilanka close to Jaffna.

In the ancient times ‘Nainativu’ was called Nag island. At the Shaktipeethas here there is a temple of a female deity, Nagpushani devi. Locals call her ‘Nainadevi’ because of which the name of the island changed to Nainadweep from Nainativu as in Tamil tivu means island.’ – Mr. Vinayak Shanbag, Sanatan ashram, Ramnathi, Goa (6.7.2018)

3A. When travelling to Nainativu island by
boat getting a vision of the rajgopura of the temple even from afar

Of the 51 Shaktipeethas on the earth the temple of Nagpushani devi is situated on Nainativu island. There is a road of 33 km from the city of Jaffna in North Srilanka till village Kurikduvan. Then you have to travel 20 minutes by boat to reach Ninativu island. The Indian Ocean surrounds the island. Even from a distance the rajgopura of the temple is visible.

3B. History of the Nagpushanidevi temple

There is history underlying construction of this temple. There has always been enemity between the serpent (nag) and eagle (garud) since the Mahabharat era. In the ancient times a serpent living on another island named Puliyantivu would pluck a flower every day and offer it to the devi. One day the eagle appears there and blocks the path of the serpent by perching on a stone in the middle of the ocean. The serpent sits on another stone in the ocean waiting for the eagle to leave. After sometime a trader from the Chol kingdom of Tamilnadu going to worship the deity watches the conflict between the two and requests the eagle to move out of the way of the serpent. The eagle agrees only if the trader promises to build a temple of Nagpushani devi here. The trader promises to do so and the eagle asking the serpent for forgiveness leaves. Later the trader builds the existing huge temple for the devi. In 1620 after the Portuguese invasion some parts of the temple which were destroyed were renovated in 1788.

Mr. Marawanpulavu Sacchitanandan a devout Srilankan Hindu sent two of his employees who arranged our boat rid , sightseeing of the temple and a car to travel on the island of Nainativu.

5. Being able to see 29 Shaktipeethas
with the grace of Paratpar Guru (Dr.) Athavale

All this occurred due to the grace of Paratpar Guru (Dr.) Athavale. It is solely due to His grace that along with Sadguru (Mrs.) Anajali Gadgil we were able to see 29 Shaktipeethas in Bharat, Nepal, Bangladesh and Srilanka.

‘Due to Sadgurukaku’s speech charged with Divine Consciousness (Chaitanya), Her presence, Divine guidance and spiritual energy, we were not distressed in any way, rather our journey was blissful. All of us seekers offer gratitude a million times at the Holy feet of Paratpar Guru (Dr.) Athavale for having given us such a Sadguru of the nature of Shakti (energy).’