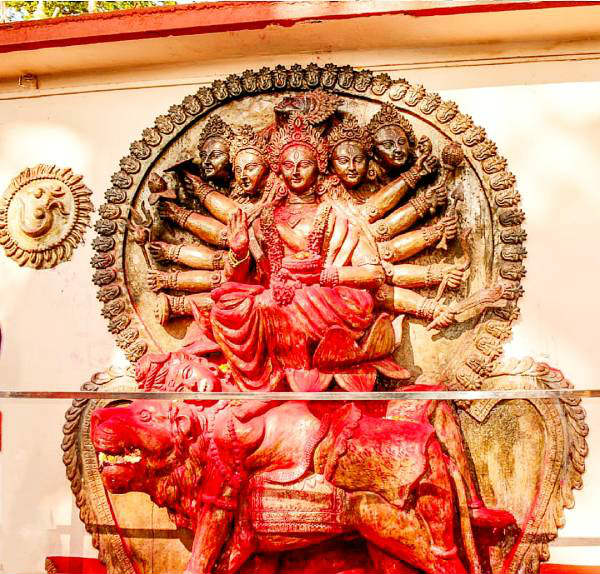 Symbolic idol of Shri Kamakhya devi in the temple premises

Guwahati is the capital city of Assam. Its ancient name was Pragjyotishpur. In Dwaparyug this city was the capital of Narakasura’s kingdom. The city got its name ‘Pragjyotishpur’ as Astrology (Jyotish shastra in Sanskrit) was taught here. Shri Kamakhya devi temple is situated 10 kilometers away from Guwahati on the Nilachal mountain.

The places where different body parts of Devi Sati had fallen, emerged as ‘Shaktipeeth’. The place where her yoni (genitals) fell is called ‘Kamakhya’. Kamakhya is renowned as the supreme seat of Tantra on the entire earth and is an important peeth amongst the 51 shaktipeethas. After entering the temple one has to descend up to 30 feet to a pond shaped like a yoni. Temples of ten Mahavidyas are situated on Nilachal Mountain in and around the Kamakhya devi temple. The temple of Shri Kamadev is near this temple. This is an important place for worshippers following the path of tantra and mantra. The greatness of this place is that after performing tantrik worship one immediately acquires supernatural powers. The form of this Devi with six heads and twelve arms is quite prevalent.

2. Legend from the Puranas

2A. Annihilation of Narakasura by Shrivishnu with the help of the illusion of Shri Kamakhya devi

Dr. Diwakar Sharma, a devotee of Shri Kamakhya devi, an expert in astrology and vastu science and author of the Holy texts ‘Rajrajeshwari Kamakhya Rahasya’ and ‘Dashamahavidya’, explained the legend of this place.

One day Narakasura determined to acquire Shri Kamakhya devi as his consort. Devi promised to marry him provided he built stone roads on all four sides of the Nil Mountain and a rest house near Kamakhya temple, overnight. She also said that if he was unable to accomplish this then he would be annihilated.

Inflated with pride, Narakasura completed building all the four roads and was about to complete the rest house when the illusory rooster of Mahamaya (Devi) made crowing sound indicating culmination of the night. This enraged Narakasura. He chased the rooster and slew it on the opposite bank of the river Brahmaputra. Even today this place is named after this incident as Kuktachaki (kukta meaning rooster). Thereafter with the help of the illusory power of Devi Bhagwati, Bhagwan Shrivishnu annihilated Narakasura. After the annihilation of Narakasura, his son Bhagdatta was crowned as the king of Kamarupa. Later, as all his descendants were killed, Kamarupa kingdom got divided into various smaller kingdoms, and King Samant started ruling Kamarupa. Due to the bad deeds of Narakasura and the curse of a sage, Devi vanished (became unmanifest) and the Kamakhya temple got destroyed.

In the eighth century, the Kings during those times rebuilt the Devi temple. The temple was repeatedly attacked and rebuilt until the 17th century. The present temple was built during the reign of the Ahom kings in the year 1565.

2B. Nilanchal is the mountain where Kamadev received the boon of life !

Before visiting the temple of Adishakti Mahabhairavi Shri Kamakhya devi, one must visit the temple of ‘Mahabhairav Umanand’ situated on an island in the middle of river Brahmaputra near Guwahati. This is a natural rock island. It is also known as ‘Madhyanchal’ mountain because at this place itself Kamadev had awakened Deity Shiva from the state of meditation with his arrow of desire. So, Deity Shiva had razed him to ashes. After that, Kamadev was revived here on Bhagwati’s Mahatirtha (Yonimudra) Nilanchal mountain; hence this area is known as Kamarupa.

3A. Though the Kamakhya devi temple is flooded with devotees throughout the year, festivals like Durga utsav, Pohan Biya, Durgadeul, Vasant puja, Madandeul, Ambuvachi and Manasa puja are celebrated here with great fervour.

3B. To fulfill ones wishes, devotees perform Kanyapujan and organize bhandaras (Preparation of food on large scale as a religious offering to God and later distribute it as prasad to all the gathered devotees).

3D. Shri Kamakhya devi temple is divided into three parts. The first part is the largest where entry is restricted, the second part is one where one can pay obeisance to the Devi. Here there is continuous flow of water from a stone. It is believed that the Devi menstruates for three days of the month. On those days, the temple is closed for the public. On the fourth day, the temple is opened ceremoniously amidst playing of music.

4A. The Ambubachi Mela – a blessing

For all tantriks, mantriks and evolved souls in the world, the annual Ambubachi mela is indeed a boon. It is the period of menstruation of Devi Sati. As per Scriptures from the Puran, this period is celebrated once in 16 years in Satyayug, in Dwaparyug once in 12 years, in the Tretayug once in 7 years and in the Kaliyug annually in the Hindu lunar month of Aashadh (approx. June).

4B. During the Ambubachi mela there is spontaneous flow of water in the temple’s garbhagriha

The Puranas state that during the Ambubachi mela the Devi menstruates and that for three consecutive days there is spontaneous flow of blood instead of water from the Mahamudra (Yoni-tirtha) in the garbhagriha (sanctum sanctorum). This happens automatically and is a miracle in this Kaliyug.

When explaining this, Dr. Diwakar Sharma stated that during the Ambubachi mela the doors to the garbhagriha (sanctum sanctorum) close spontaneously and one is unable to pay obeisance to the Devi. During this period, highly evolved seekers all over the world, following the Path of Tantra, Mantra and Yantra, visit to perform various types of rites, recitation of mantras and spiritual practice. After the three days of menstruation, Shri Kamakhyadevi is offered special ritualistic worship.’ (Reference : Website) A. On Maharshi’s advice, both Sadgurus payed obeisance to Kamakhyadevi, offered Her Sanatan made kumkum and received it back as prasad

On 15.11.2019, H.H. Dr. Om Ulaganathanji instructed both Sadgurus to take Sanatan made kumkum along with them while traveling to Kamakhya for paying obeisance to the Devi, offer it to the Devi and to bring it back as Her prasad and then use it every day. On the morning of 16.11.2019, Sadguru (Mrs.) Binda Singbal and Sadguru (Mrs.) Anjali Gadgil when paying obeisance to the Devi offered Sanatan made kumkum to Her and brought it back as Her prasad. Then they both did pradakshinas to the temple. On the path of pradakshina (circumambulation) there is an idol of the Devi on the wall in the form of yoni where devotees offer prayers wholeheartedly.

B. After offering obeisance at the feet of the Tantra Ganapati in the Kamakhya devi temple premises, the coins stuck to the idol fell on both Sadguru’s heads as a blessing