1. Worship of the Goddess on Vijayadashmi (Dussehra)

2. Worship of Goddess Lakshmi on the no moon day of the Hindu lunar month of Ashvin

2.1 Why perform the act of ‘sweeping out alakshmi’ before performing ritualistic worship of Lakshmi ?

2.2 Food items to be included when offering naivedya to Goddess Lakshmi

3. What is the science underlying the act of ‘gondhal’ for Goddess ?

4. What is the science behind the ritual of ‘jogva magne’ ?

1. Worship of the Goddess on Vijayadashmi (Dussehra)

On day of Dussehra, doing the physical act of the worship of the Goddess transforms the expressed bhav of an embodied soul into an unexpressed one and thereby helps in maintaining its stability.

Aparajita is a destroyer form of Goddess Durga. Aparajita manifests from the womb of the earth with the help of the absolute earth element. This manifestation of Goddess Aparajita is for the sake of souls on the Earth. This form of the Goddess which establishes itself on the throne of the eight petals carries a trident and with the help of Deity Shiva, seeking assistance from the Devatas of directions and the Devtas of the premise, destroys the demoniacal energies.

Since the leaves of Shami are good conservers of energy, worship of Goddess Aparajita is carried out near a Shami tree 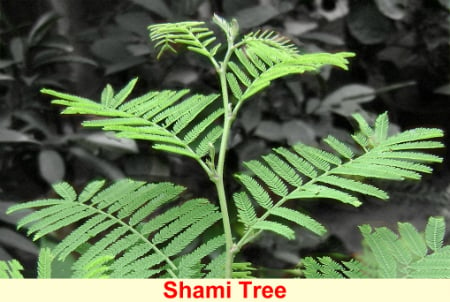 The Aparajita form of Goddess Durga is worshipped near the Shami tree because Shami leaves are good conservers of energy and they conserve the energy of Aparajita that manifests in the form of fountains, for long periods. People benefit from this conserved energy of Goddess Aparajita by preserving these leaves in their homes. – (Pujya) Mrs. Anjali Gadgil

2. Worship of Goddess Lakshmi on the
no moon day of the Hindu lunar month of Ashvin

2.1 Why perform the act of ‘sweeping out alakshmi’
before performing ritualistic worship of Lakshmi ?

‘Sweeping out alakshmi’ means collecting the dust in the house with a new broom in a pan and throwing it out of the house. Dirt in the house is a symbol of raja-tama attributes. That in which the sattva attribute is low and that from which the chances of deriving chaitanya is 0% is said to be devoid of Lakshmi and is called ‘alakshmi’. Since midnight is the period that generates maximum amount of raja-tama frequencies, this act is done to purify the premises and to facilitate the entry of sattva frequencies into it, so that after ritualistic worship of Goddess Lakshmi maximum benefit of chaitanya is obtained.’ – (Pujya) Mrs. Anjali Gadgil

2.2 Food items to be included
when offering naivedya to Goddess Lakshmi

‘The naivedya should include cloves, cardamom, milk and sugar. These items are termed as “trigunavatar” (incarnation of three attributes) as they alter the composition of sattva, raja and tama in the embodied soul’. – Miss Megha Nakate

A) ‘On this day, frequencies of Devta Lakshmi and Kuber exist to the extent of 30%. By worshipping both these Devtas on this day, the bhav and devotion of the embodied soul increases and the bhav lasts for 3 hours.’ – Miss Megha Nakate

B) ‘The touch of the saviour frequencies of Goddess Lakshmi displace the raja-tama particles within as well as around the body of the embodied soul and help in creating an armour around it.’

3. What is the science underlying
the act of ‘gondhal’ for Goddess ?

‘In order to reduce the suffering of other family members, caused by negative energies, the Goddess is awakened with a loud sound and is invoked to undertake Her mission of destruction.

During gondhal a loud absolute fire element oriented sound is generated by impact and Energy frequencies get attracted to this sound. This restricts the movements of the negative energies within the room and many of them are destroyed in a short span of time. As a result, the benefit of the Energy frequencies lasts for a longer period. During Navaratri, since the Energy principle associated with the absolute fire element is active, a gondhal done then derives greater benefits from it. 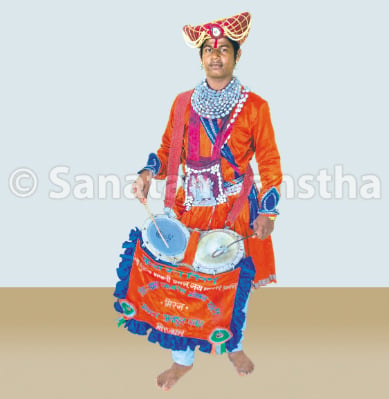 These embodied souls are included in the devotees of the Goddess because for generations they have been worshipping Her. They are also termed as messengers or servants. Using their powerful energy laden speech they invoke the Goddess and are able to awaken Her destroyer form. If the bhav of the embodied soul doing the gondhal is 30 %, then on the spiritual plane he receives chaitanya to the extent of 30 %. If the bhav is higher and ego less, than the benefit can be as high as 50 %. Action devoid of bhav gives a benefit of only 10 %.

Doing the gondhal as a duty to preserve the family tradition carries only 10 % importance. On the other hand going beyond duty and fulfilling the religious duty of spiritual practice of chanting the Name of the family Devta carries 30 % importance.

4. What is the science behind the ritual of ‘jogva magne’ ?

‘Jogva’ means beckoning the Goddess with an earnest, wholehearted prayer and pleading before Her to fulfill one’s wish. This pleading symbolises a decrease in the ego of the embodied soul and is directed towards merging the Goddess principle within oneself into Her holy feet.

A form of worship as a servitor (dasyabhakti)

‘Jogva magne’ is a form of worship as a servitor. The true form of this worship is partaking of food cooked from alms of ingredients like flour, salt, etc. obtained by begging, as a servitor of the Goddess, from five households. This act, not only reduces the ego, but also helps in developing detachment.

‘The ritual of ‘jogva magne’ helps one to detach oneself from the Great Illusion and become a servitor of the Energy principle. This act amounts to taking assistance from the manifest form, to reduce one’s ego and to experience detachment in that unmanifest form.’ – (Pujya) Mrs. Anjali Gadgil